HMV Day 3 A Coaster and a Concert in Vegas

Matt and I looked up the mileage between San Diego and Las Vegas and figured we needed about five hours to get there.  And then everyone we talked to kept warning us about how it would take so much longer than that due to traffic.  I guess heading into Vegas after noon on Friday starts to be quite the cluster of chaos. Adam suggested we leave at 8:00 a.m.....when we didn't really need to be there until 8:00 p.m.  It was crazy.  I cannot imagine living somewhere with traffic like this.  We had no trouble, but we left early.  Fine by me.  Sitting at a dead stop on the freeway has to be one of the worst aspects of city driving, in my opinion.  That doesn't happen where I live.  I'm fine to skip it.  I enjoyed the drive.  It was open and expansive under a clear blue sky--just as I'd expect the desert to be.  There were soft, low mountains on the horizon all around.

When we hit Vegas we met up with my friend Val and her family at the Adventuredome Theme Park in Circus Circus.

Val was the reason Las Vegas was on our honeymoon agenda.  Val's wedding was smack dab in the middle of our trip.  We figured since we were already going to go there it would be a great launching point for our honeymoon.  We'd wanted to go to some of the national parks in southwest for our honeymoon all along.  We wisely, I think, opted not to go directly after the wedding though as it would be in the heat of the desert summer--and tourist season.  And then Val announced her Vegas wedding October.  It was was perfect.
We played in the arcade and rode a fun roller coaster.  I like roller coasters, especially if they go upside down.  I like arcades and Matt really, really likes arcades.  They had this unusual version of air hockey where the table was U shaped so every shot was a bank shot.  It was cool, sort of like combining the geometry of mini-golf with the excitement of air hockey.
After the Adventuredome we checked into our just-off-the-strip hotel, picked up Hannah from a different hotel, and then started getting ourselves excited about the Phil Lesh and Friends concert that we had tickets for.
Phil is my favorite living musician--a hard distinction to make, but which he has more than earned.  Imagine my delight then  when he announced he was playing some shows in Vegas the same weekend I happened to be there for the first time.  Hip, hip hooray!  It was fun for Matt and I to share the experience with Adam and Hannah, too.  Its always more fun with a little posse!  The venue was very cool.  It was a second floor bowling alley and concert hall.  You could bowl while you listened!  We didn't though as we're pretty committed to dancing.  The show was outstanding.  The recording is available for free streaming or download here at the ever incredible Internet Archive. 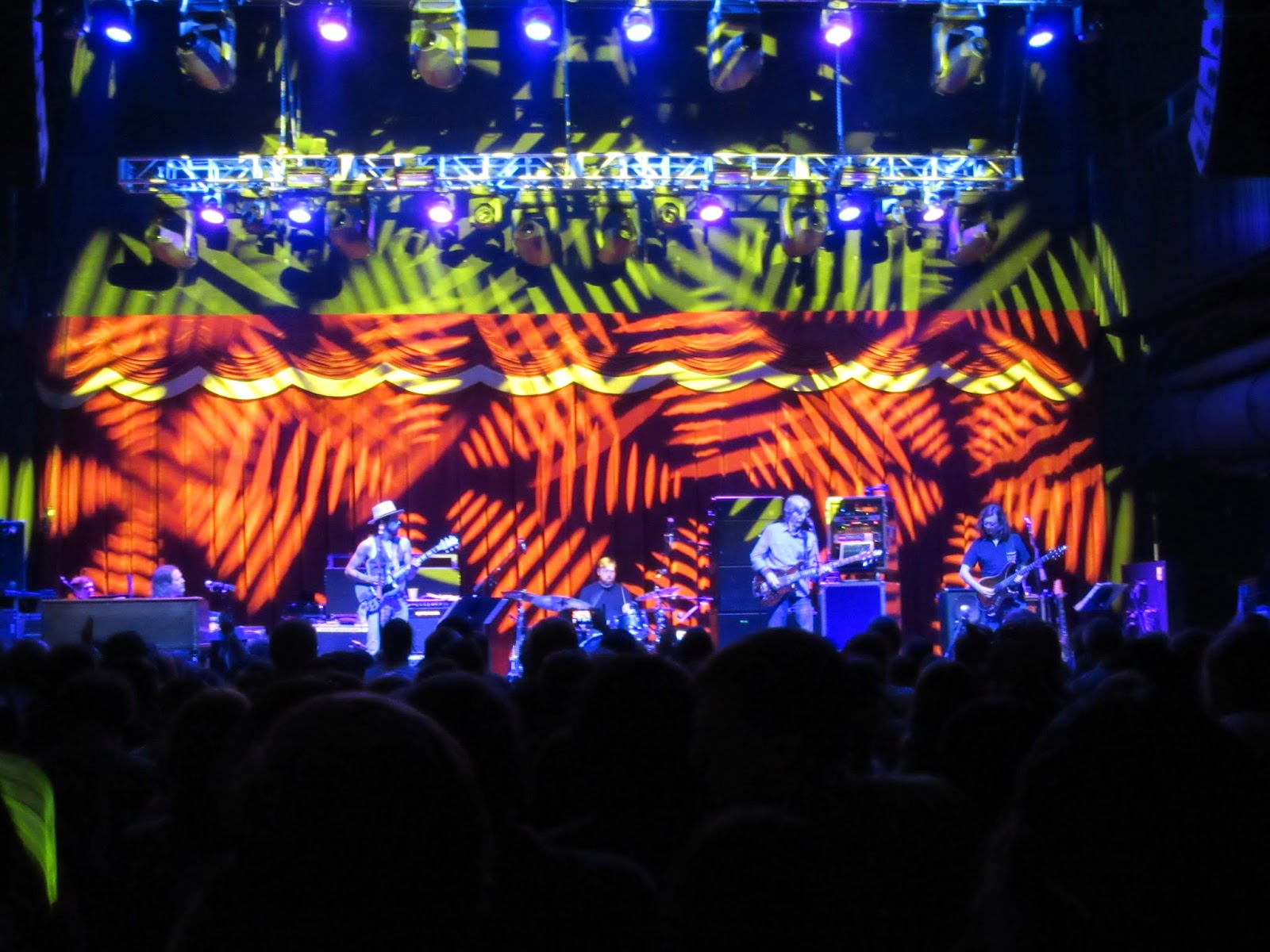 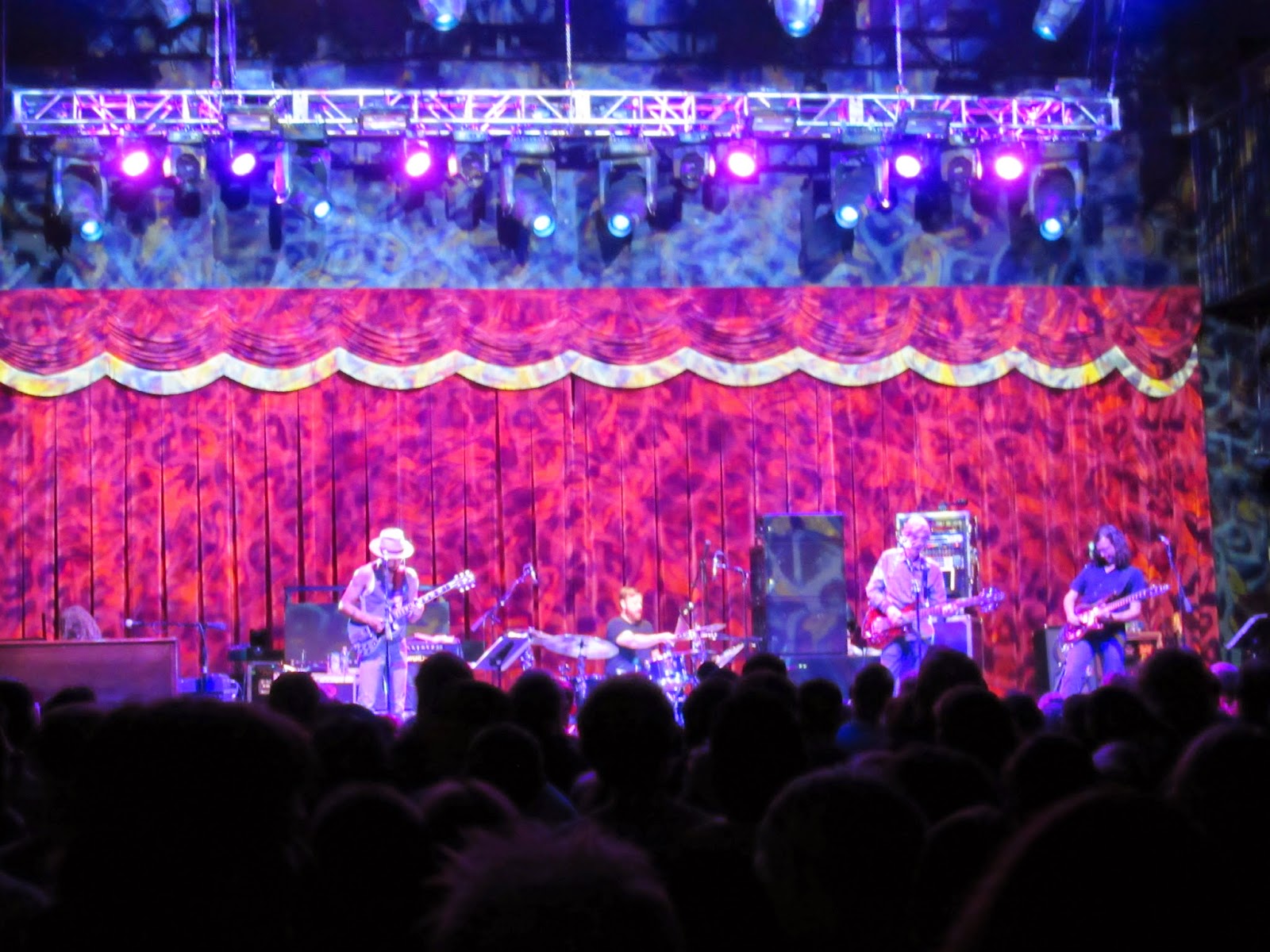 After the show ended we wandered The Strip taking in the lights, sounds, smells, and people of the big city.  It was surreal.  I think it was Adam who nailed it.  Vegas has to be about as far from my real life as possible.  It was interesting though.  And bizarre.  I'm glad to have experienced The Strip even if its not exactly my cup of tea.  So many people dressed to the 9s, especially the women.  So many lights.  So much street art.  So many casinos.  So many electronic billboards.  So many escalators.  So many street performers and beggars.    So many fountains.  So many people hawking naked women in one way shape or form.  So many smells.  So many palm trees.  So much pedestrian and street traffic at 3:00 a.m.!
We headed back to our hotel and took a dip and a soak at the 24 hour pool and hot tub before finally calling it a very, very good night.
By BLD in MT