Note From Our Spring Garden 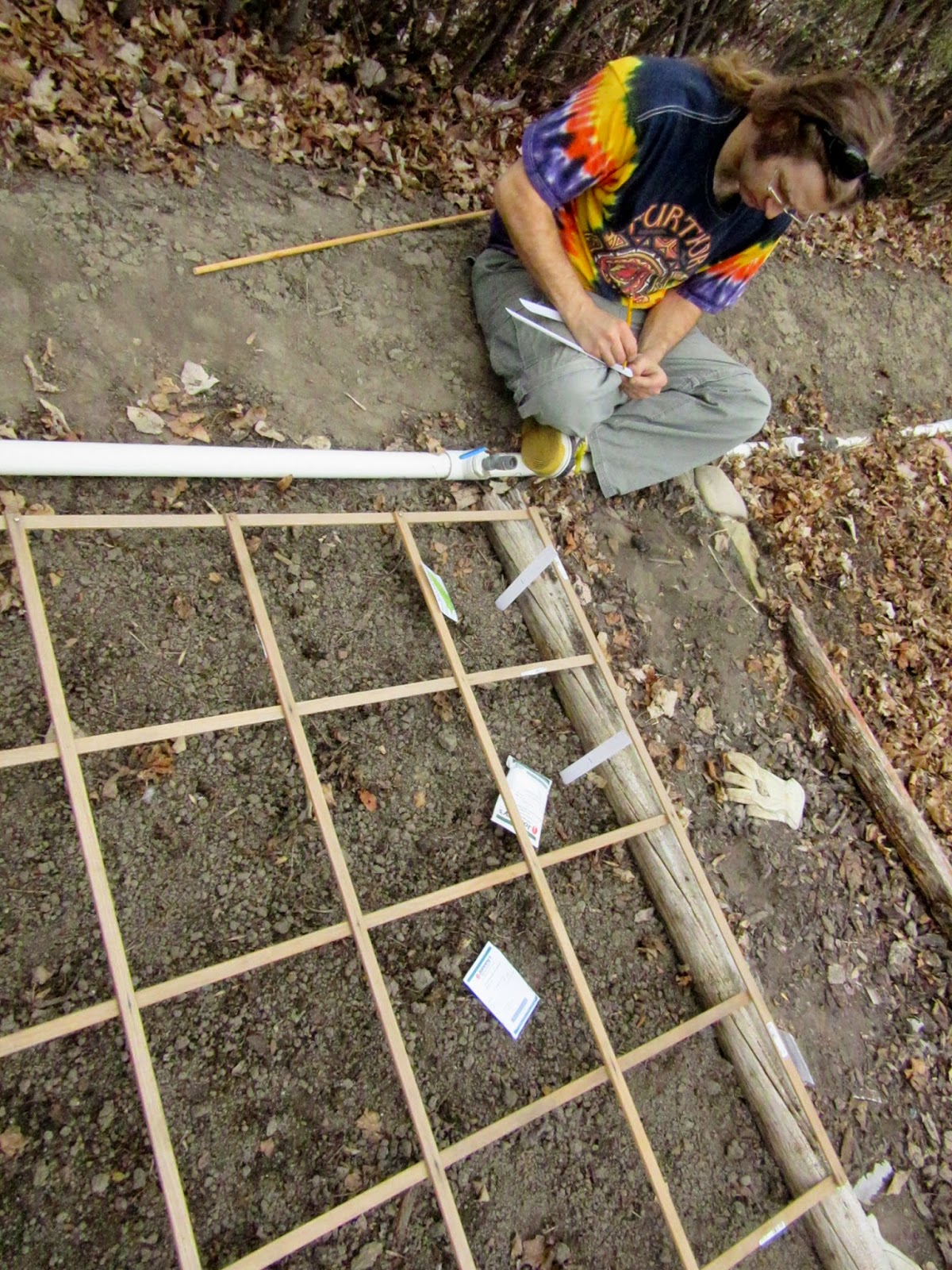 We've got a few things growing out in the garden.  We've planted a couple staggered waves of peas, the first of which have poked through in splendid little green rows.  We can see them from the back windows of the house now even.  I find the double rows so attractive. 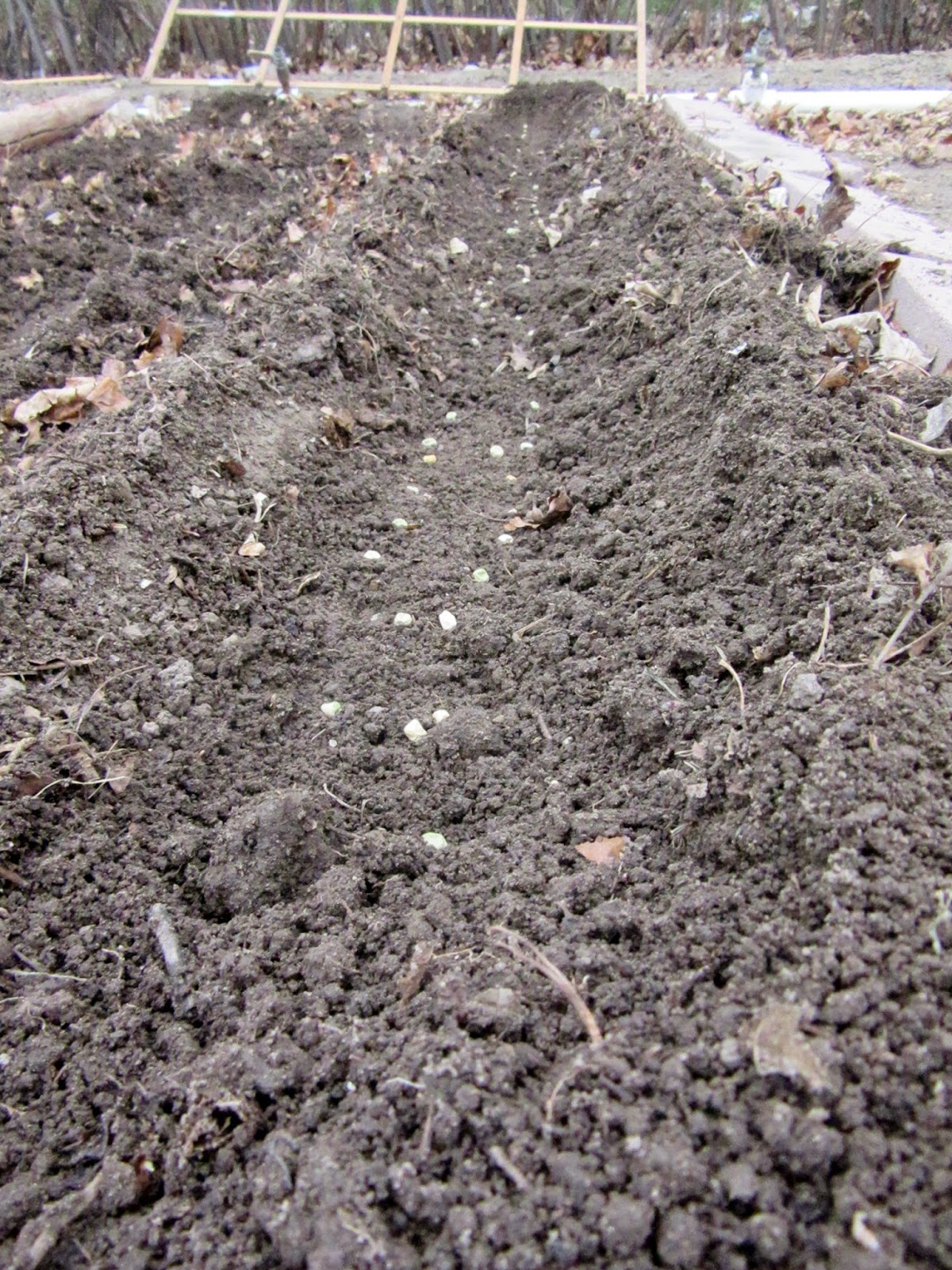 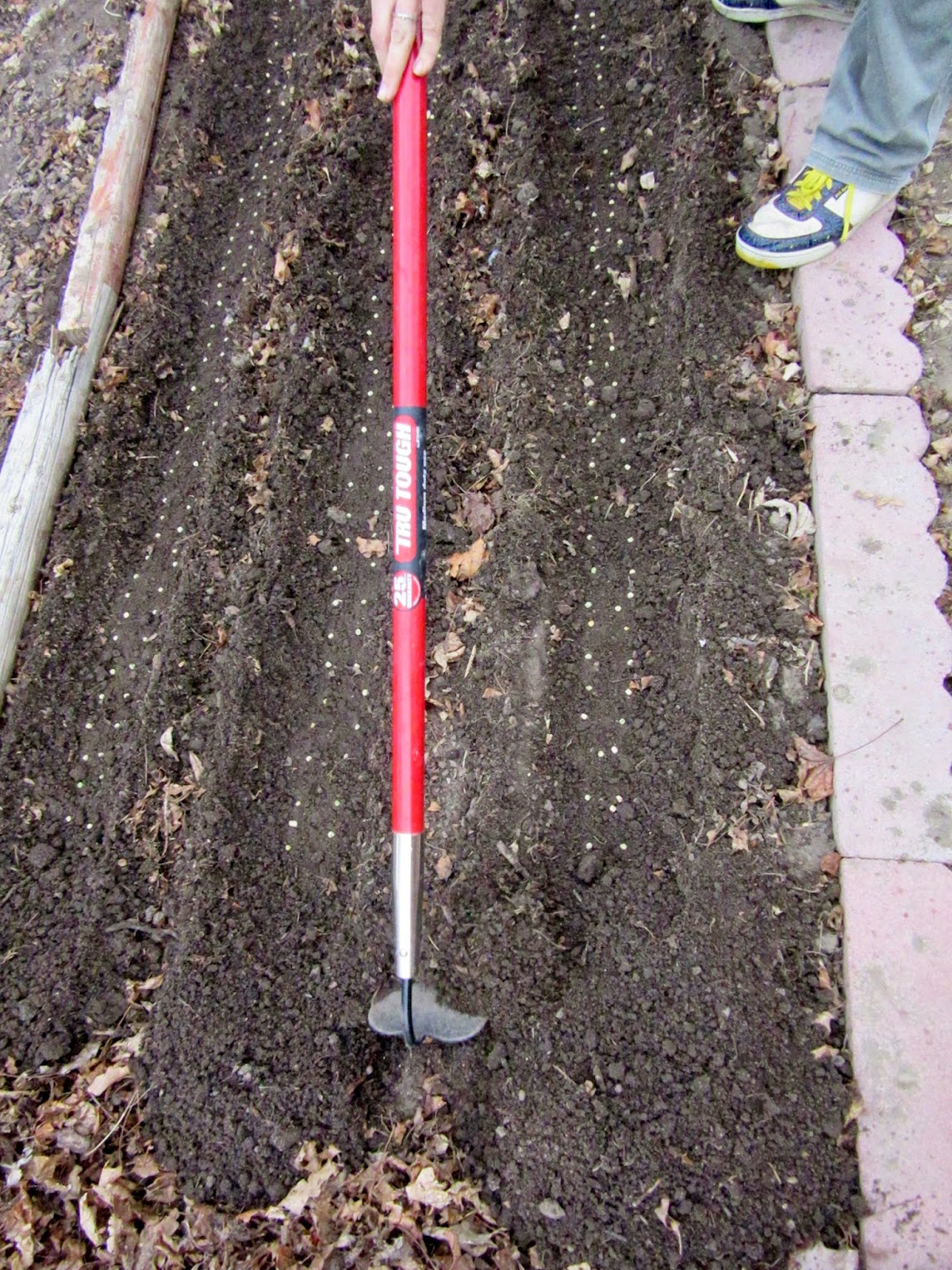 The overwintered garlic have come up are looking great, easily six or eight inches tall already.  We bought really big cloves for planting last year and hope that maybe they return as big cloves.  The ones last year were pretty little.  They taste great still, but are a bit of a pain to peel and chop. 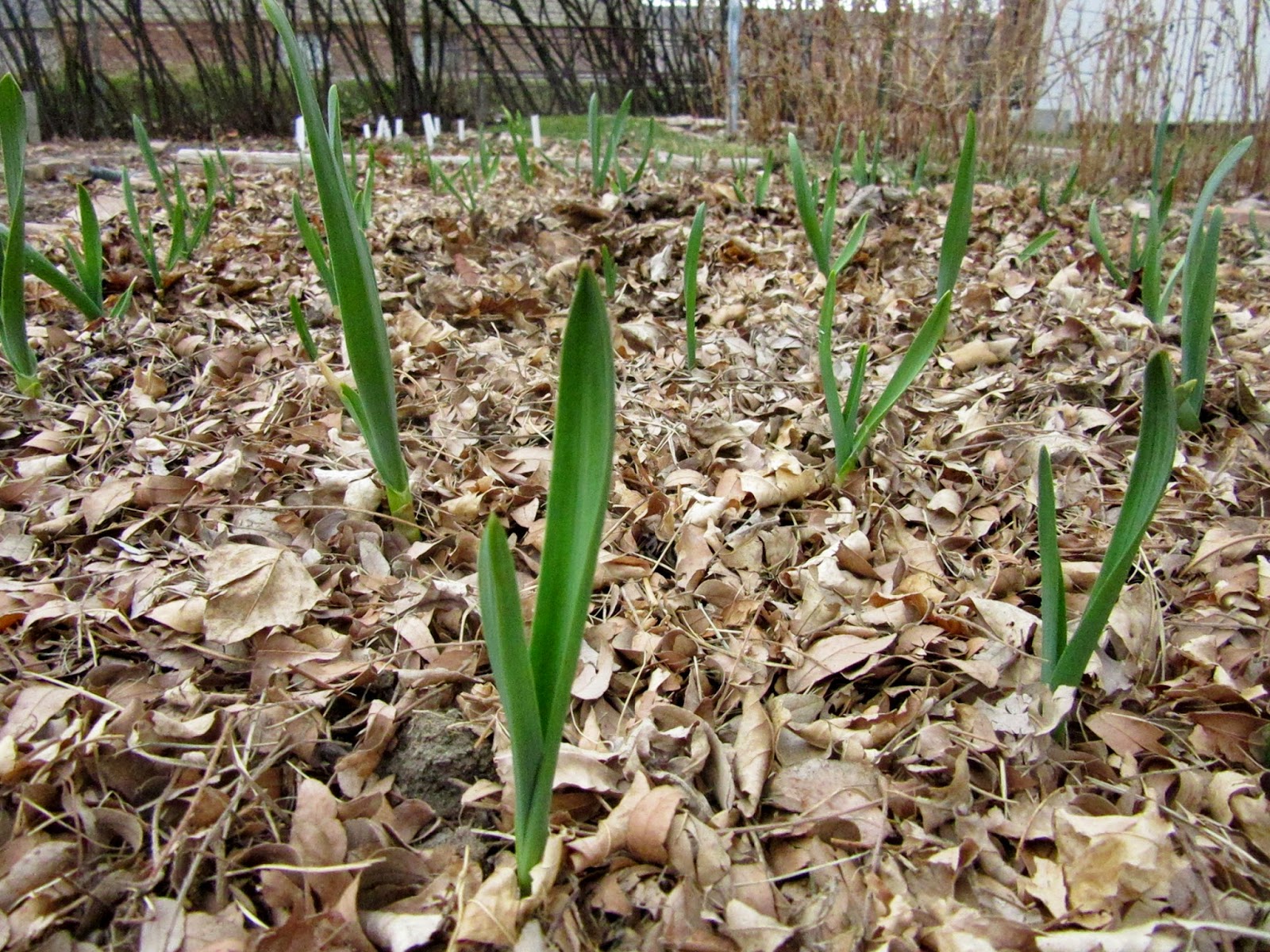 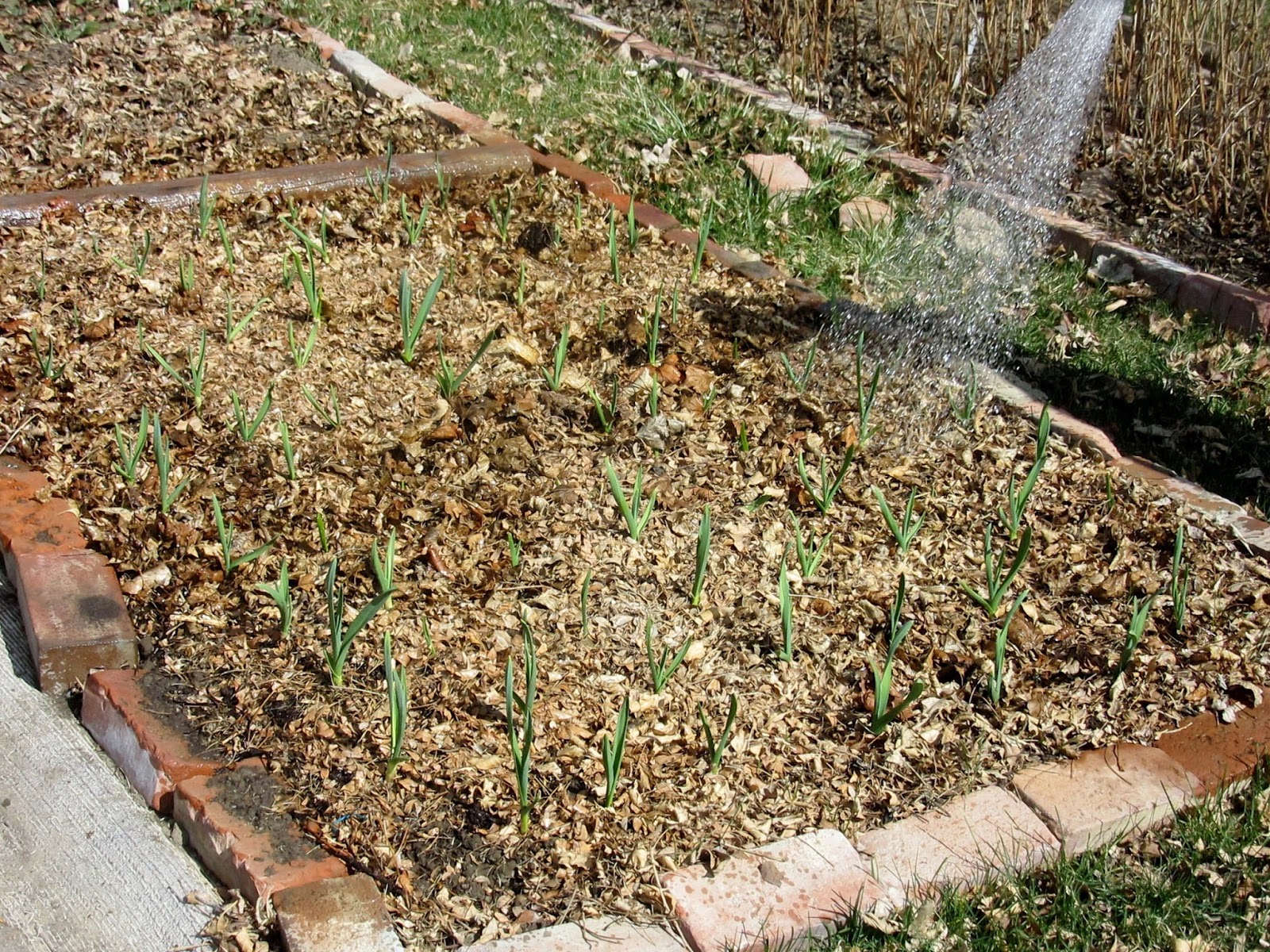 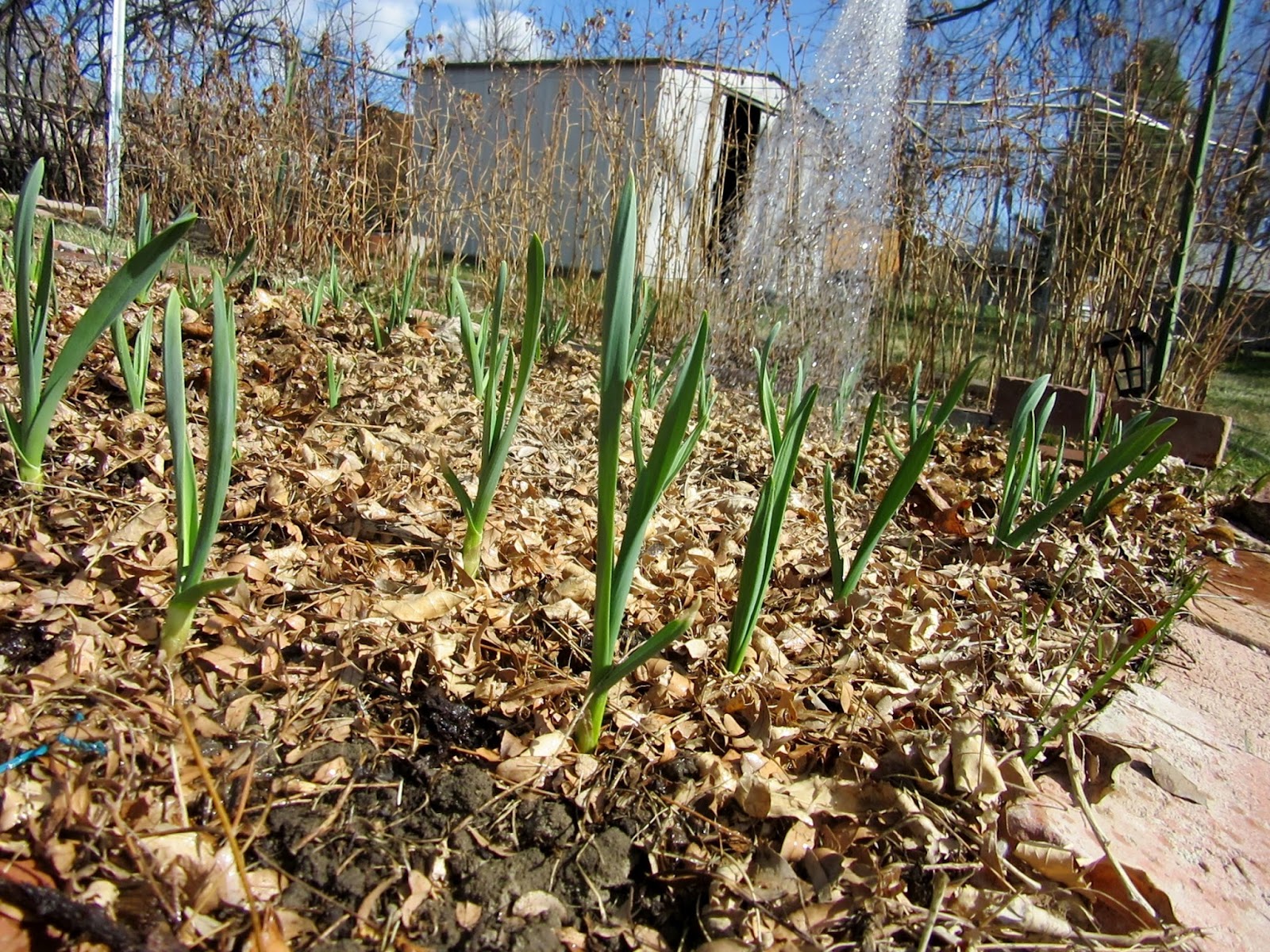 We planted chard in the front beds to keep the bleeding hearts and tulips company.  Rainbow chard is almost as pretty as a flower, if you ask me.  They and the spinach are both just itty-bitty leaves of green yet though.  We also planted one square foot of kale.  Kale is not the favorite green of either of us, but we do like it in smoothies.  So, one square foot it is. 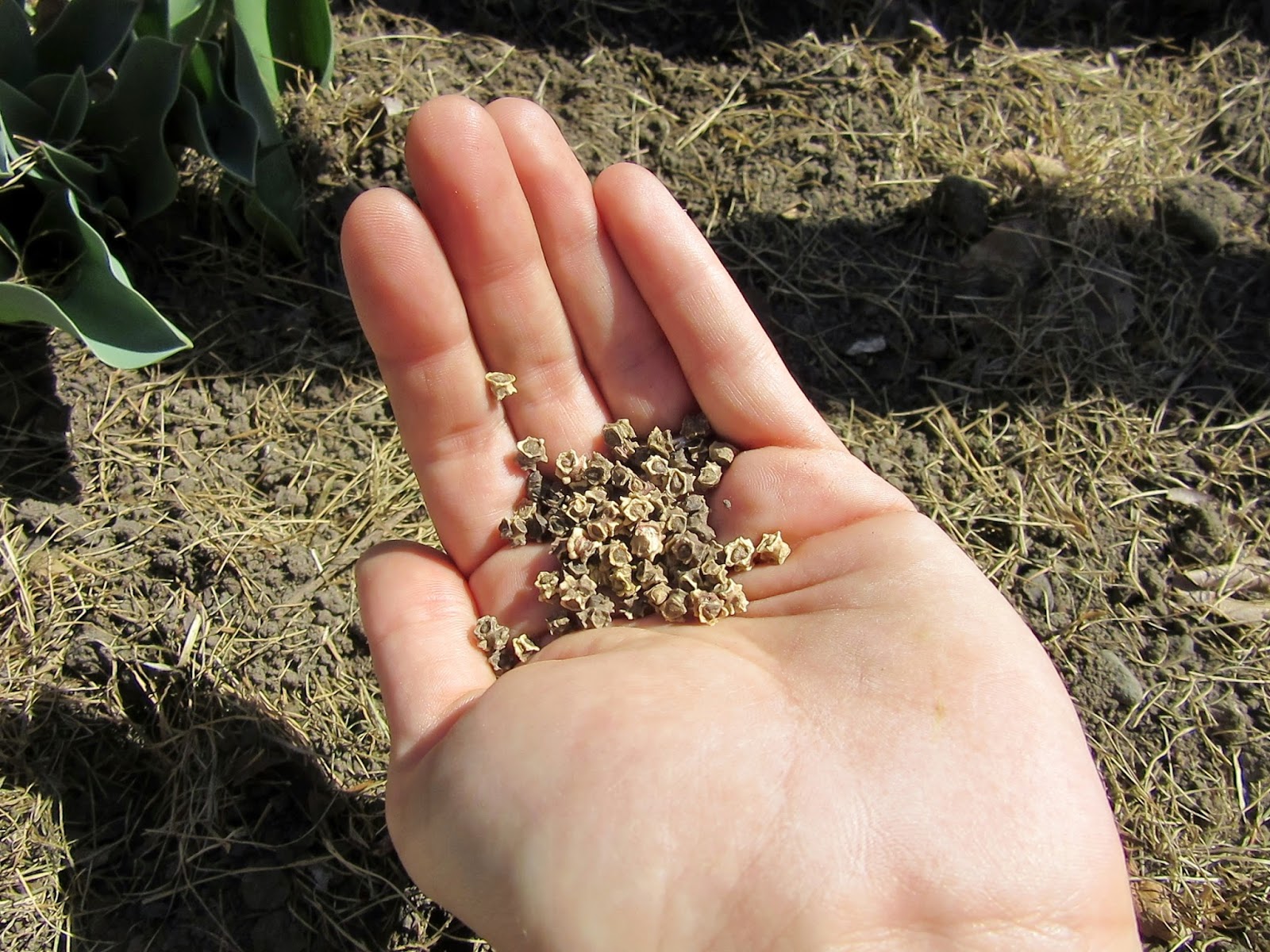 The apple and the plum trees are leafing out--the plum is blooming lovely white flowers.  The poor peach and apricot trees are still questionable after a mauling from one of our neighborhood deer.  Matt remains optimistic.  I remain doubtful.  At least we've got the plums and the apples...not that they will fruit this year yet or anything, but still! 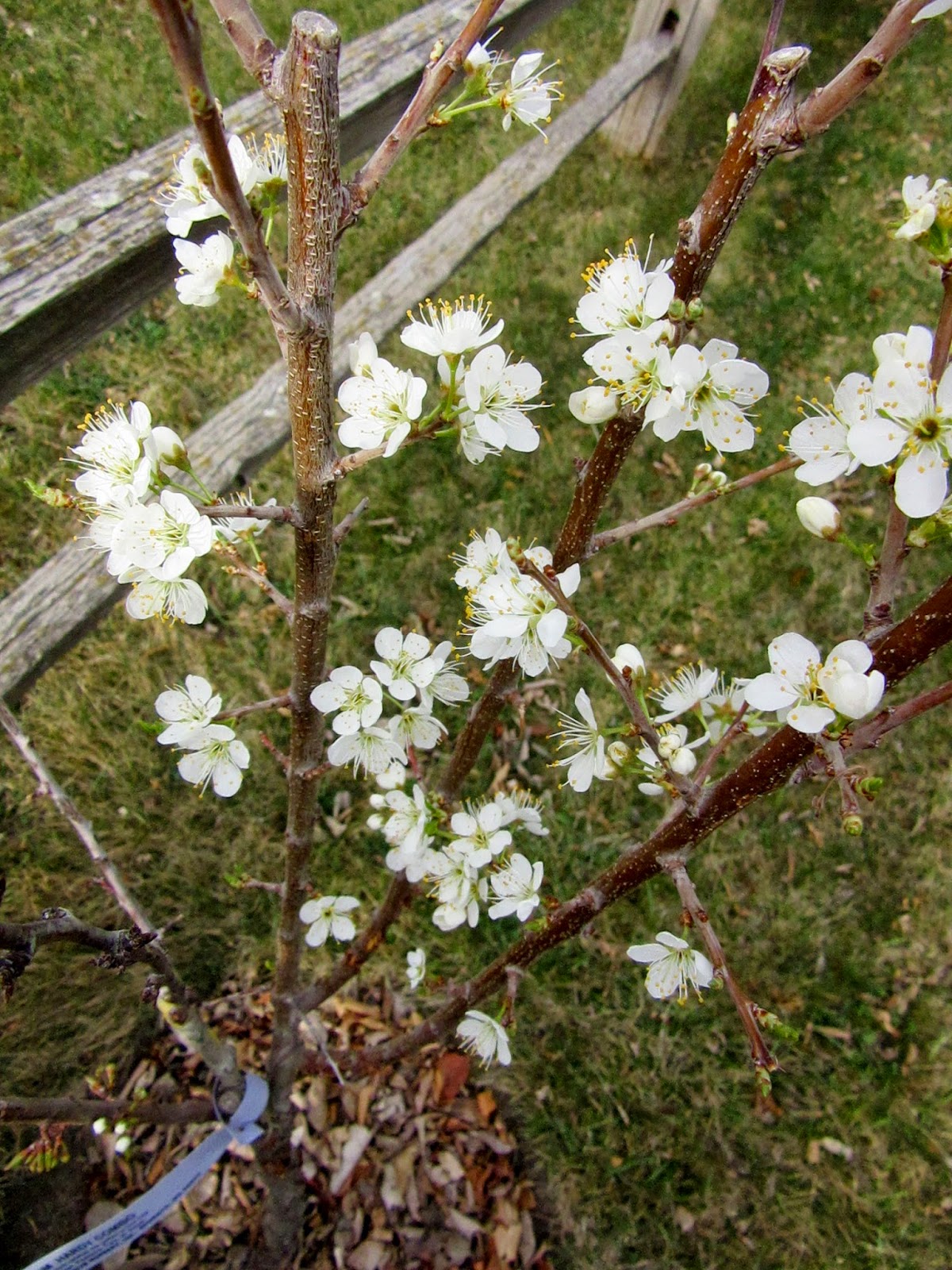 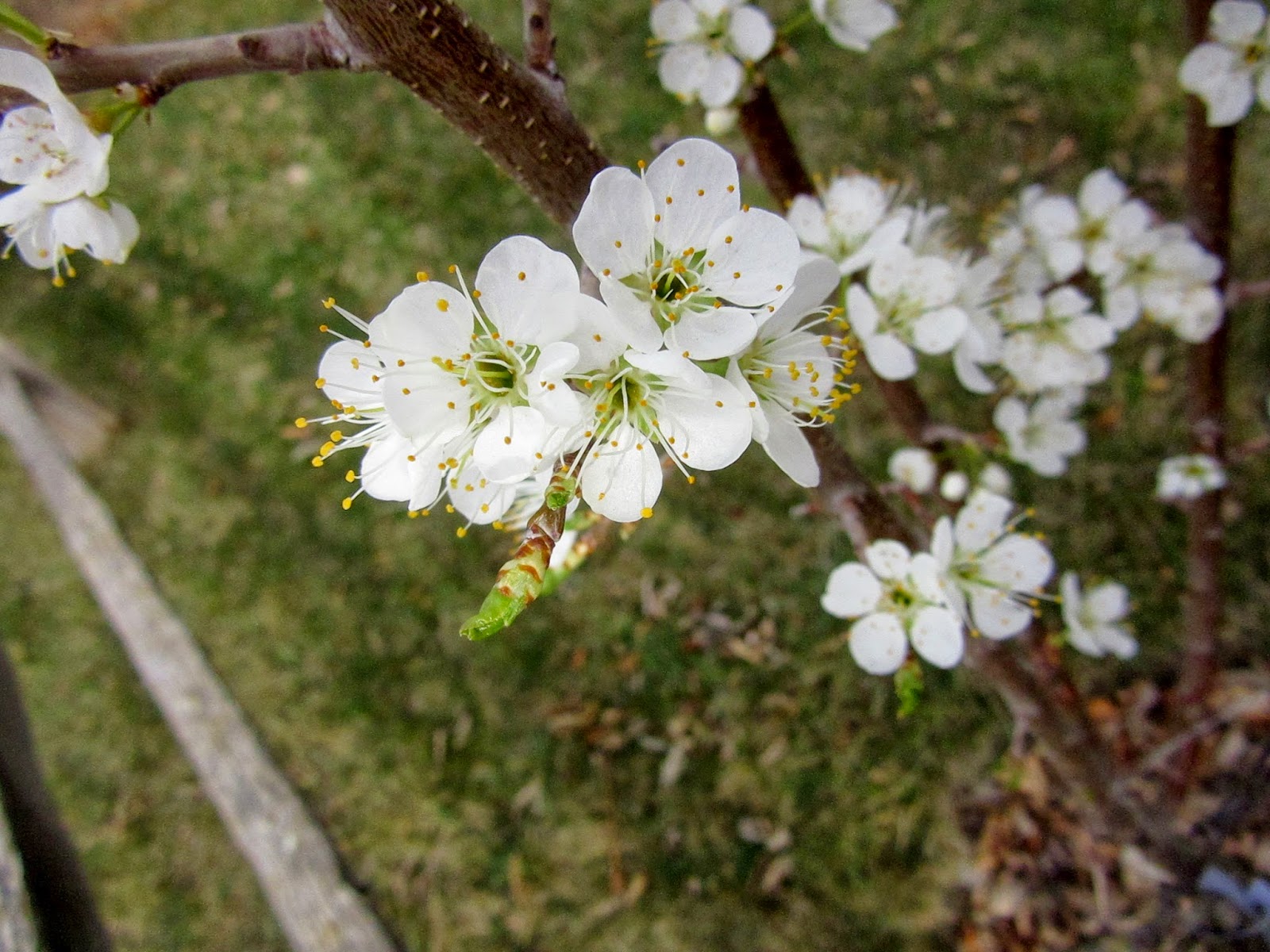 The mint, chives, thyme, and sage are unfurling in the front bed.  We're talking about transplanting all the herbs to the soon-to-be expanded beds just out the backdoor.  This would make them just steps away from the kitchen.  We think we'd like that.  This same back bed is also where we planted sunchokes last year.  So, maybe we can make it a perennial bed.  I've never eaten a sunchoke (or Jerusalem artichoke) before.  I am pretty keen on any sort of perennial food though.  Speaking of which, the raspberries and strawberries are green and leafy and happy.  This in turn makes me happy.  My mouth already waters at the thought of those fresh berries. 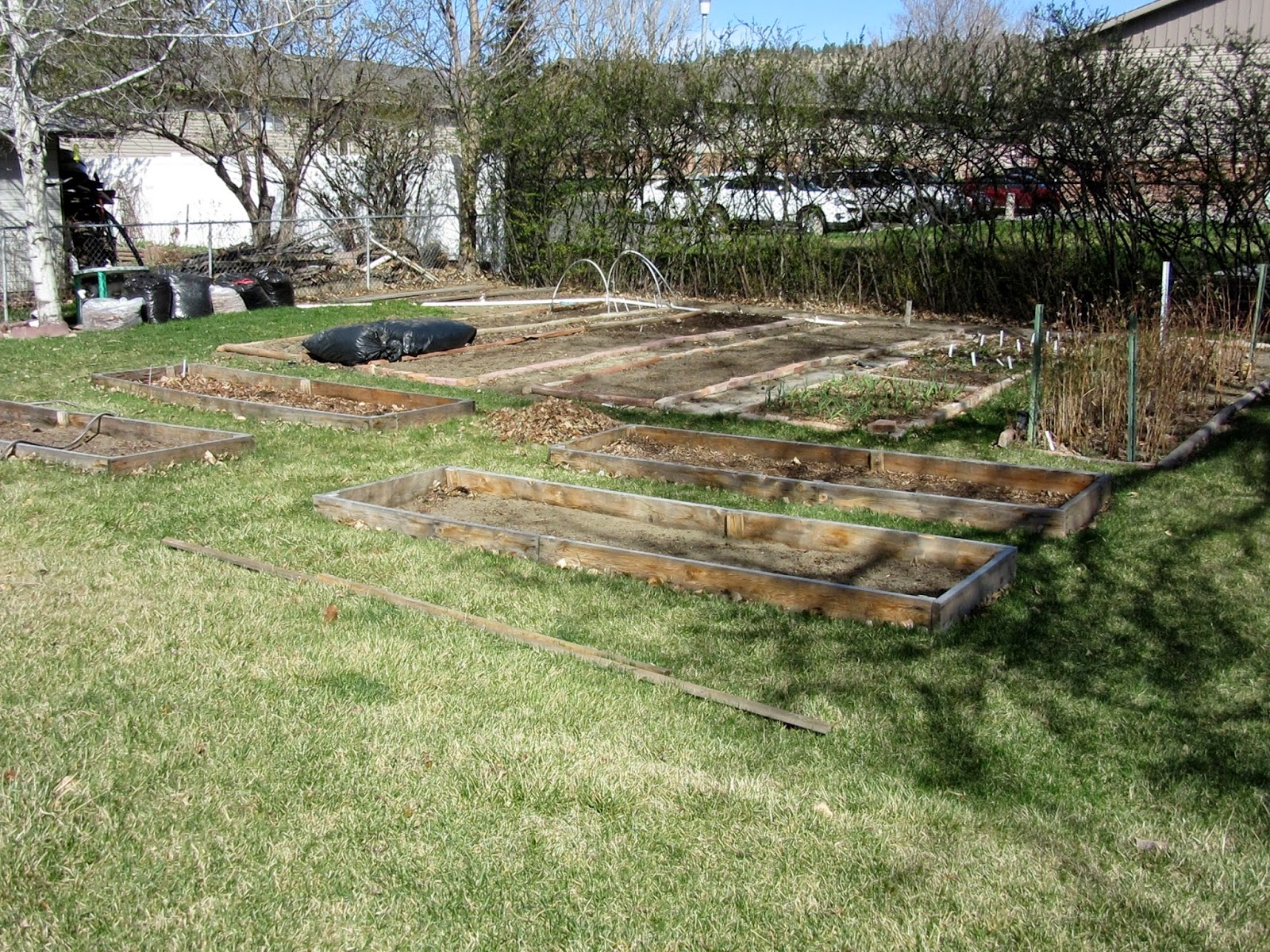 We're hardening off the things Matt started under lights in the garden nursery in order to ease their transition to the harshness of real sun and wind.  A cold spell killed off most of the marigolds he'd started so I guess we'll try direct planting them instead.  He also only got one nasturtium to start inside so we'll try them direct, too.  We keep trying to get more and more into flowers, but neither of us have taken to it as naturally as to vegetables. 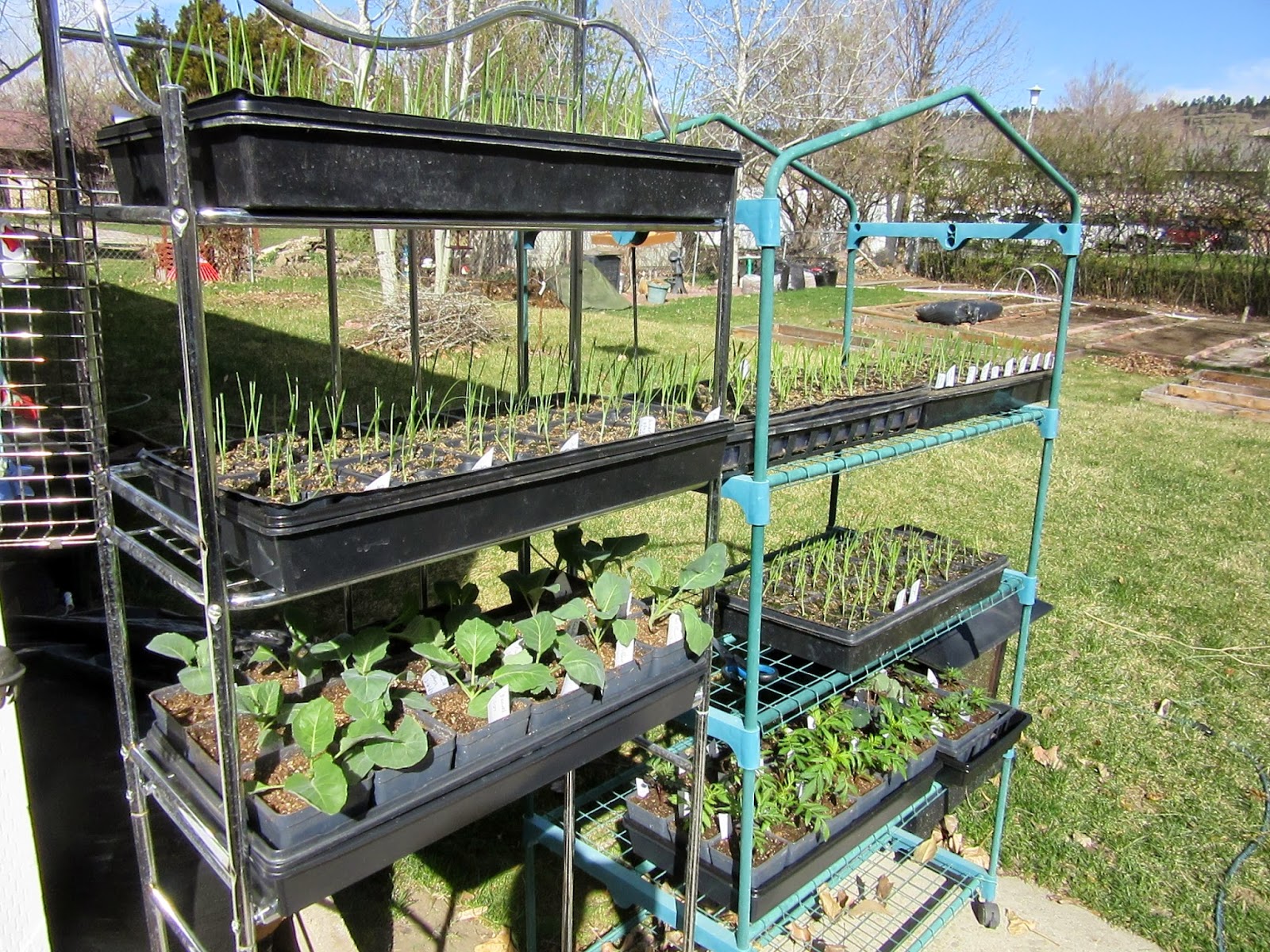 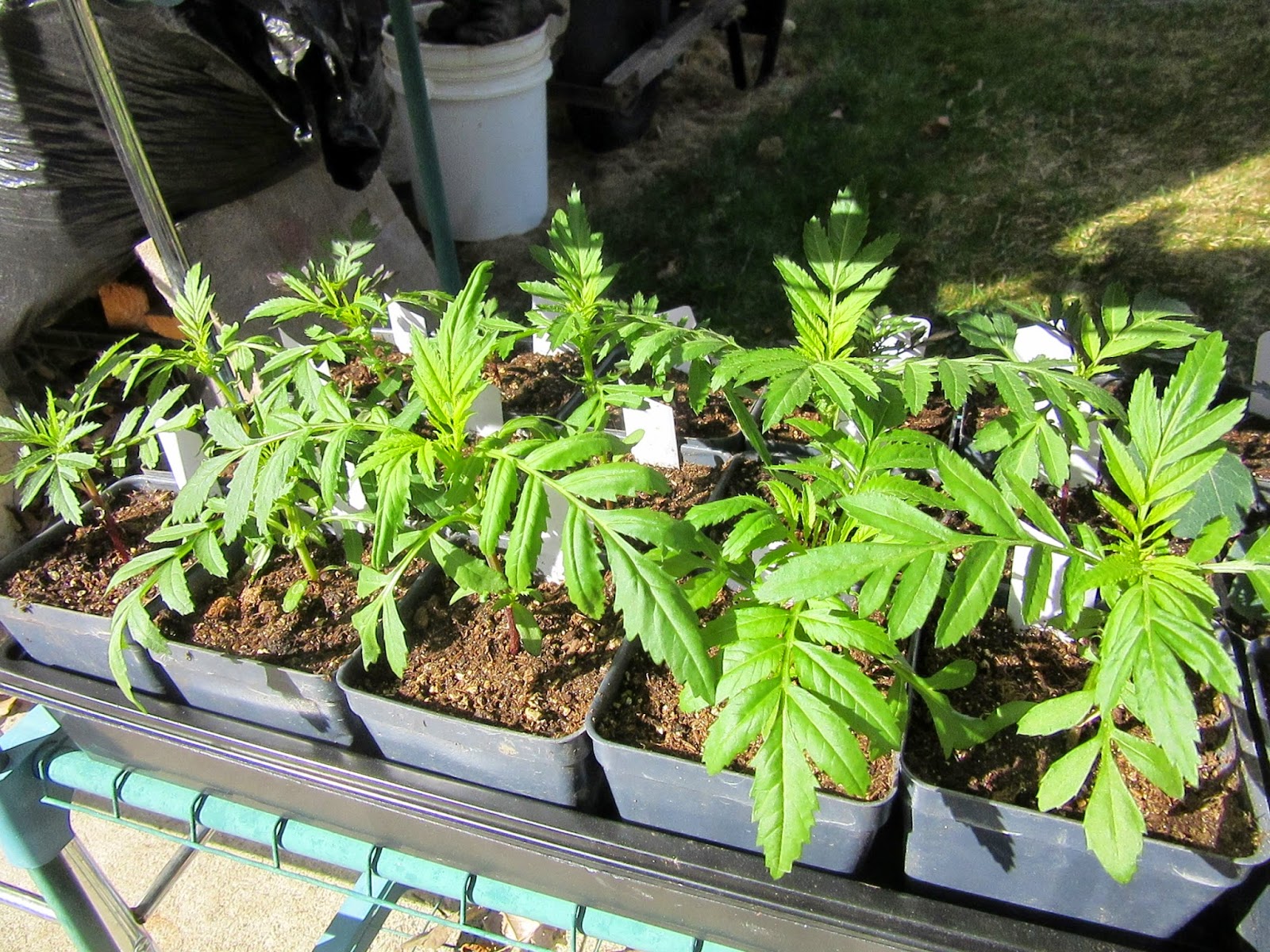 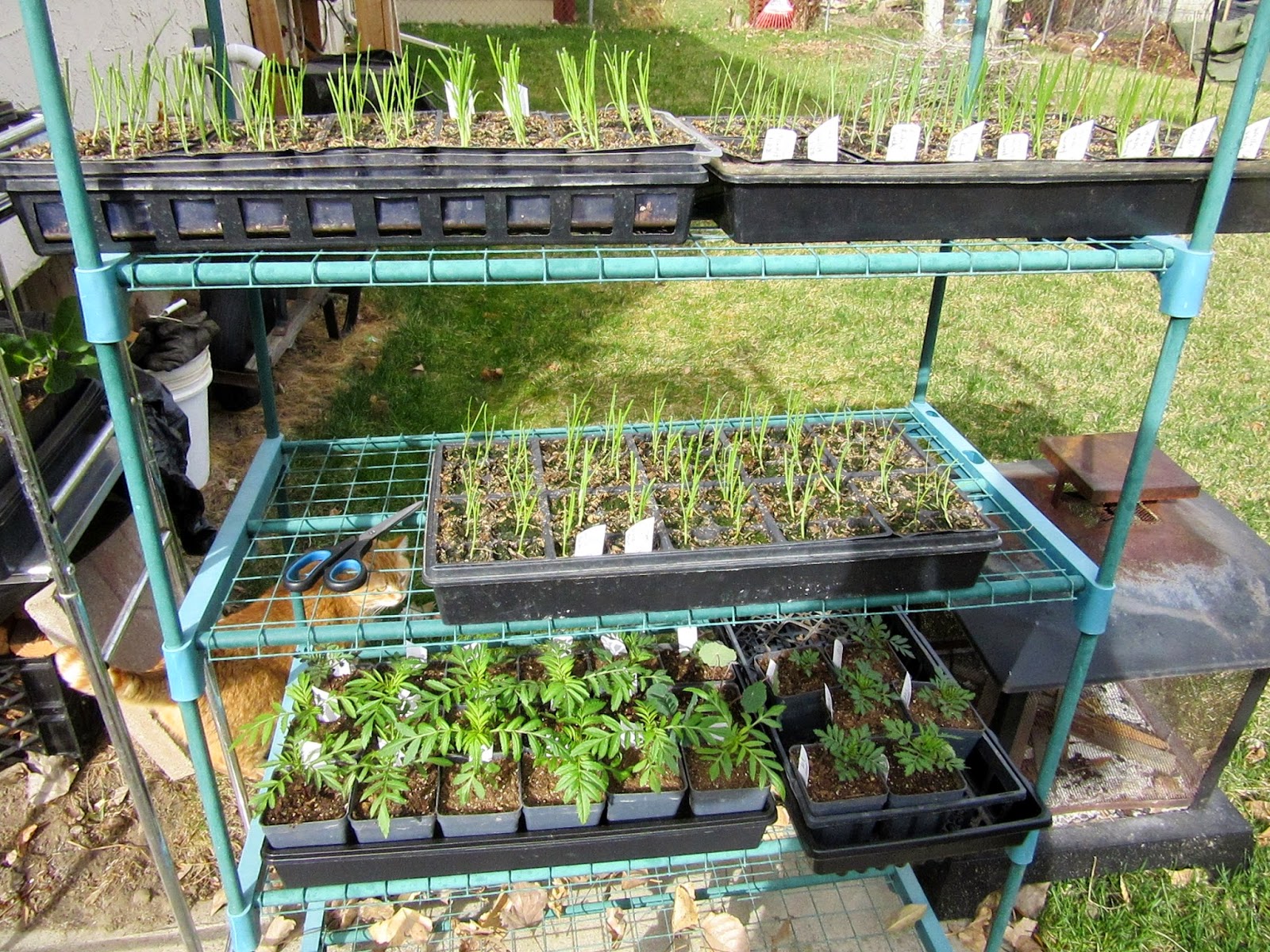 Matt has the onions and leek transplanted into the ground.  They don't seem very happy about it.  We hope they don't just shrivel up and die.  They looked so good in their little starter pots!  If they 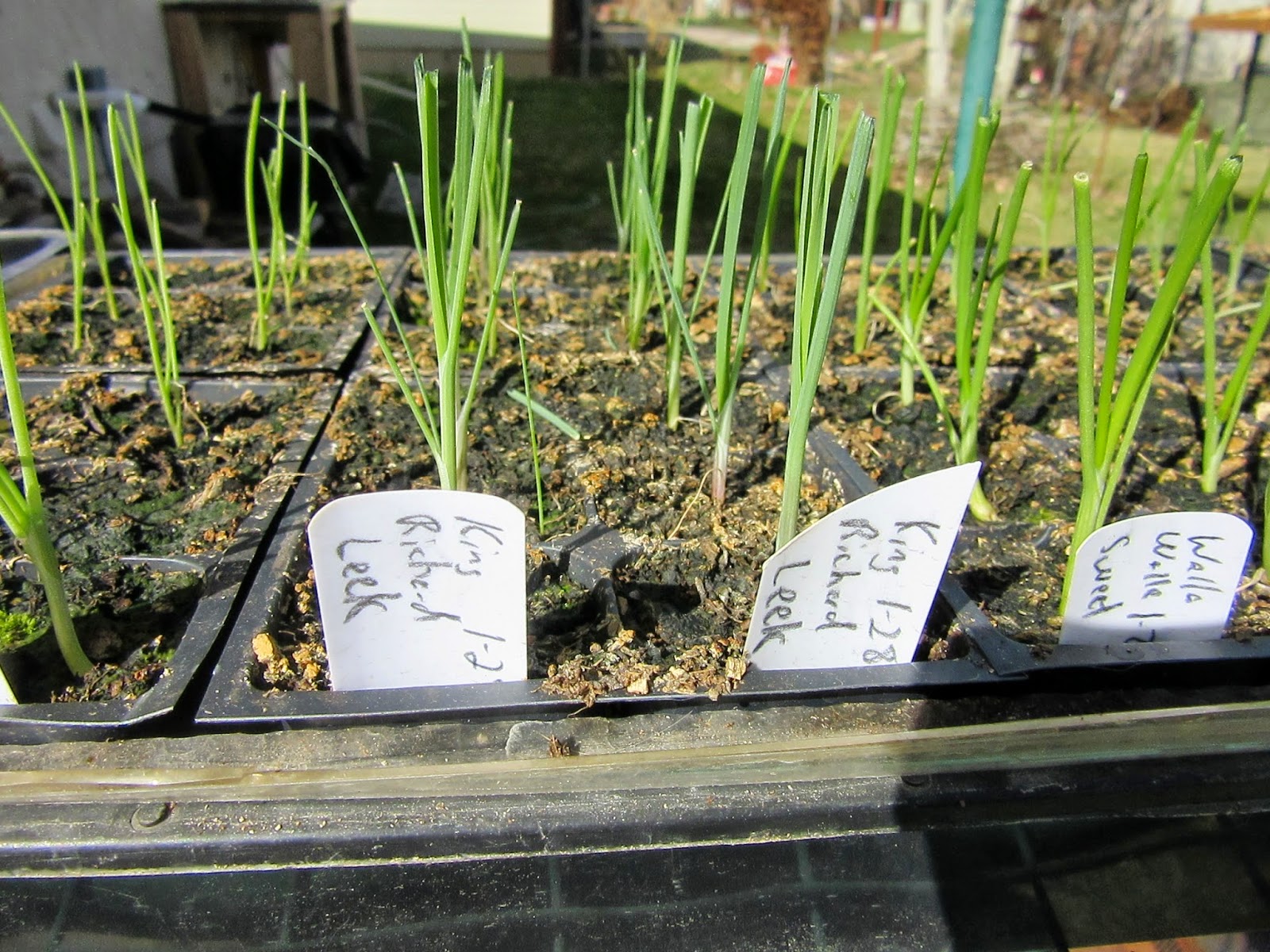 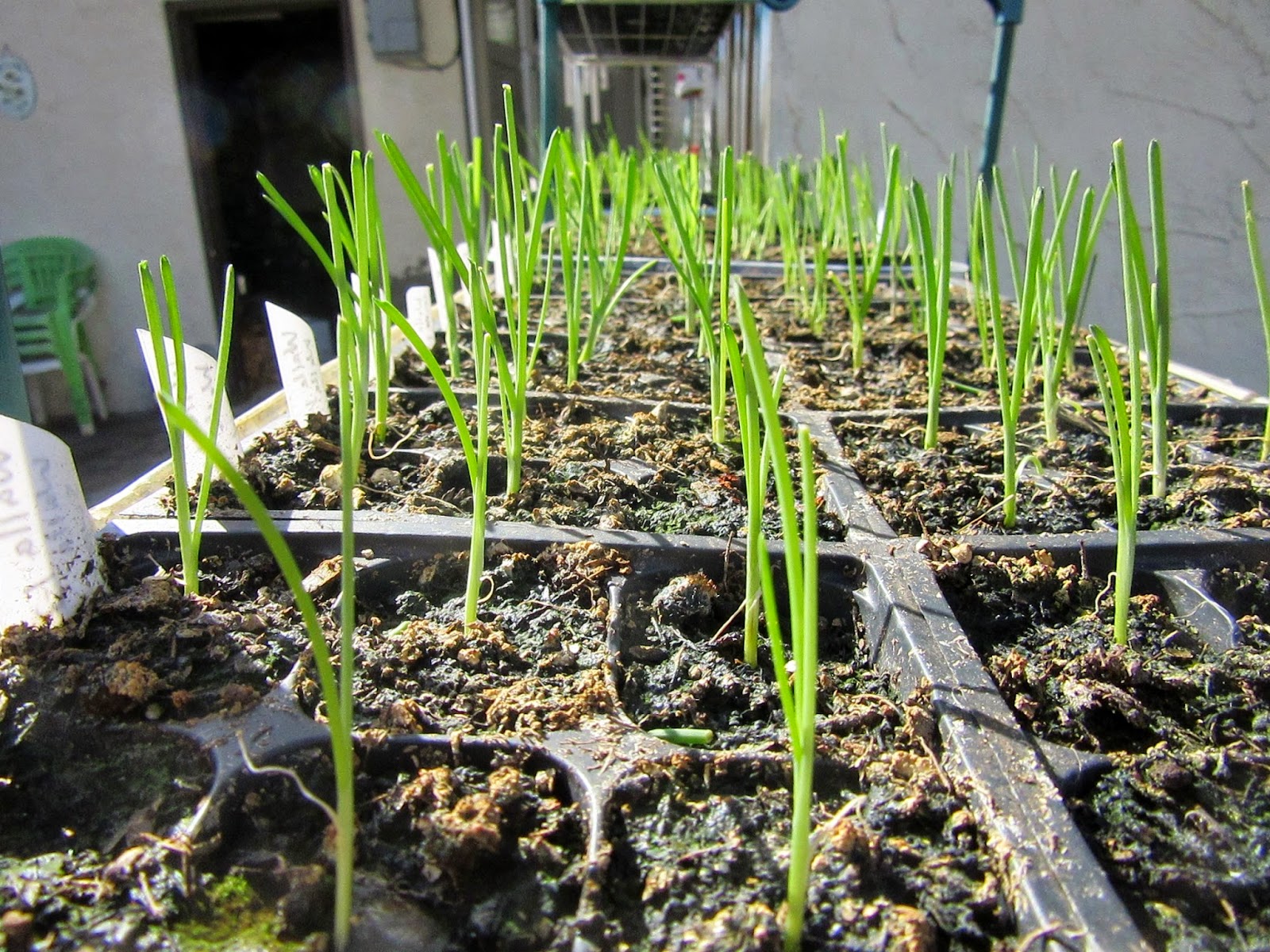 We've also transplanted out a bunch of cabbage and cauliflower that had also been started indoors.  We also have a couple experimental cabbages which we saved in the fridge over winter for seed.  We're really new at seed saving though so we'll just see how this all plays out. 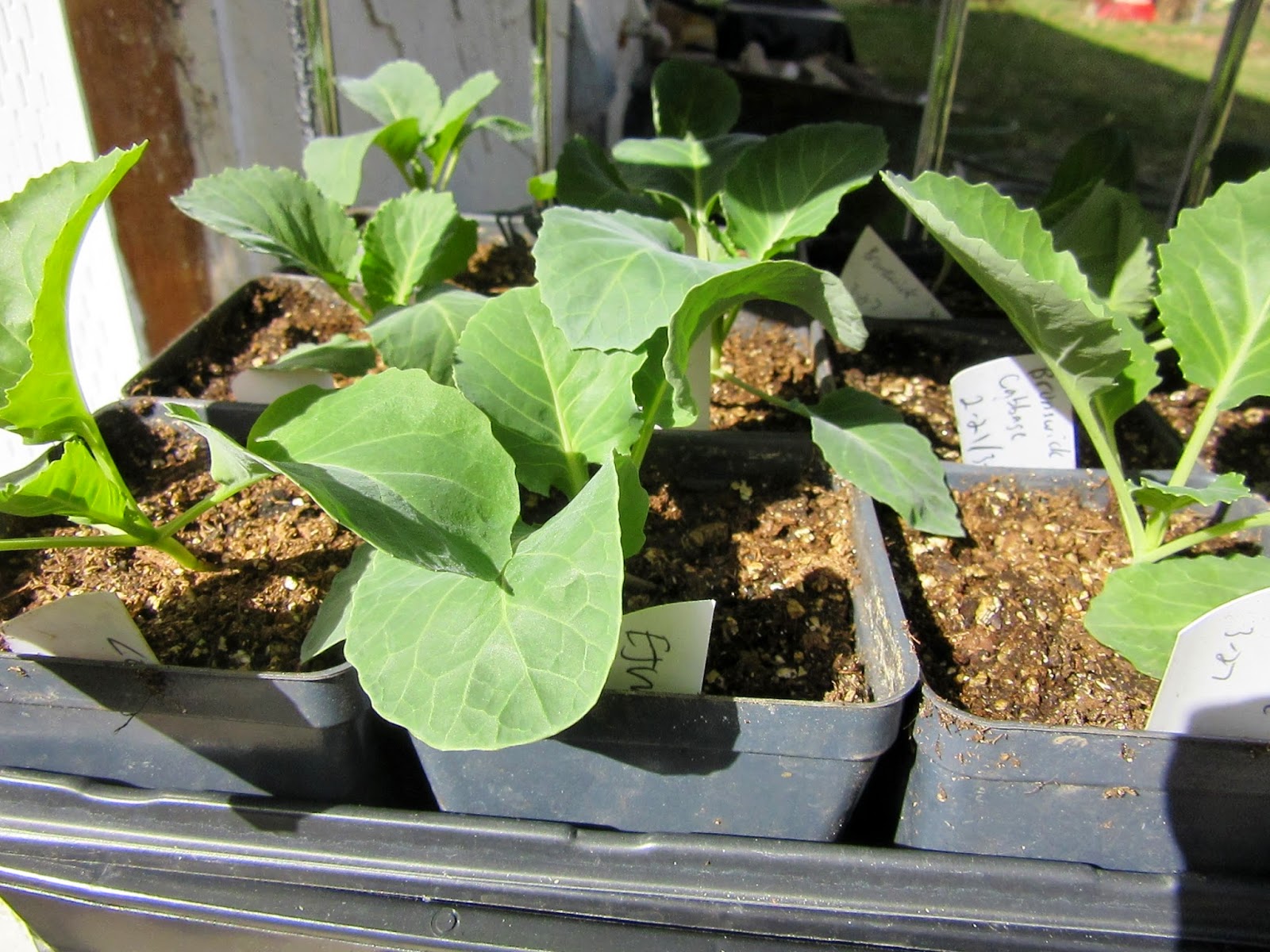 In addition to our home garden we also continue to be a part of a local community garden.  In fact, we doubled our space there this year--and inherited a plot with asparagus, tarragon, and chives.  We just had out first community work day last weekend, prepping beds for the service garden and tidying paths and things. 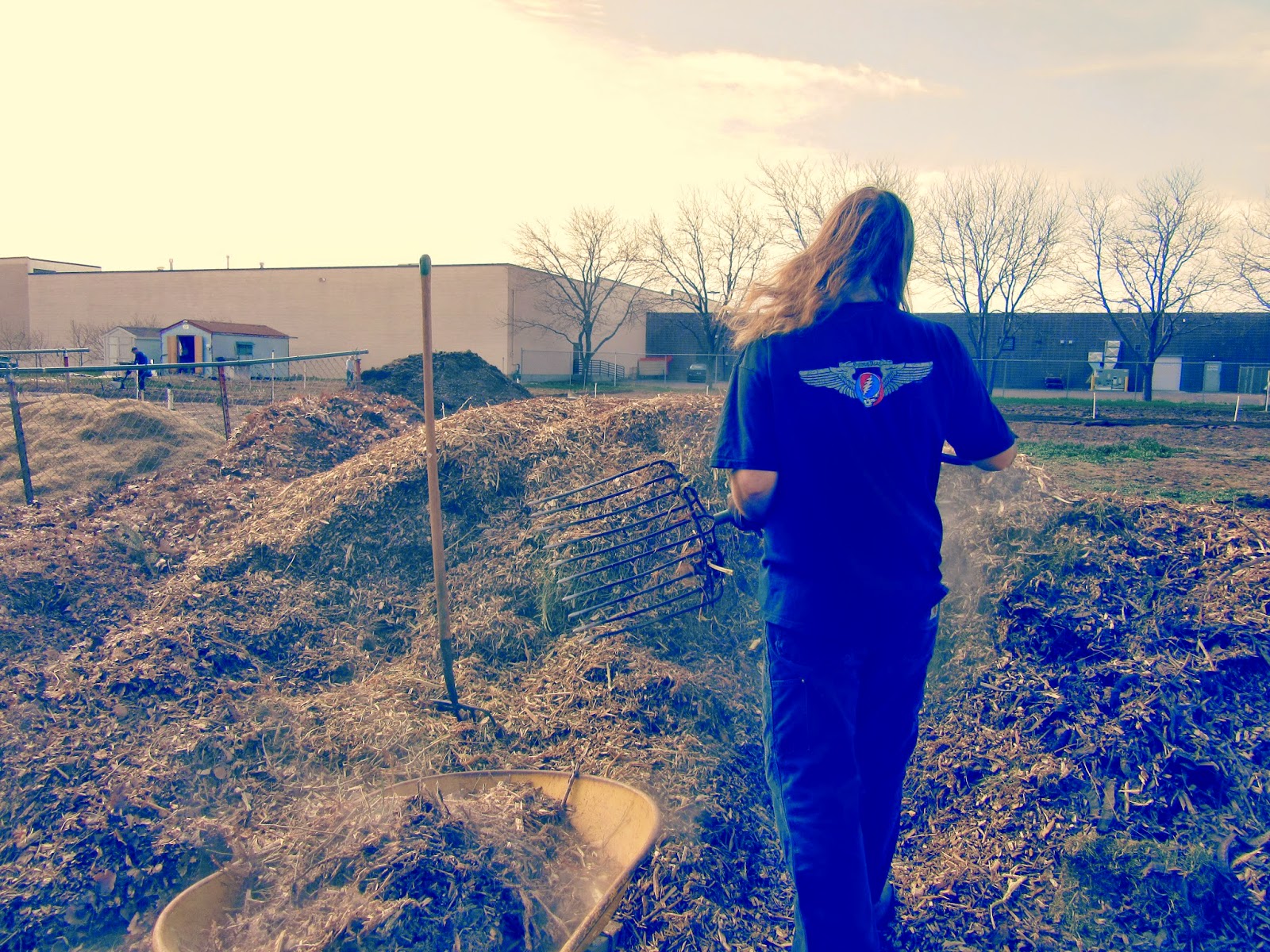 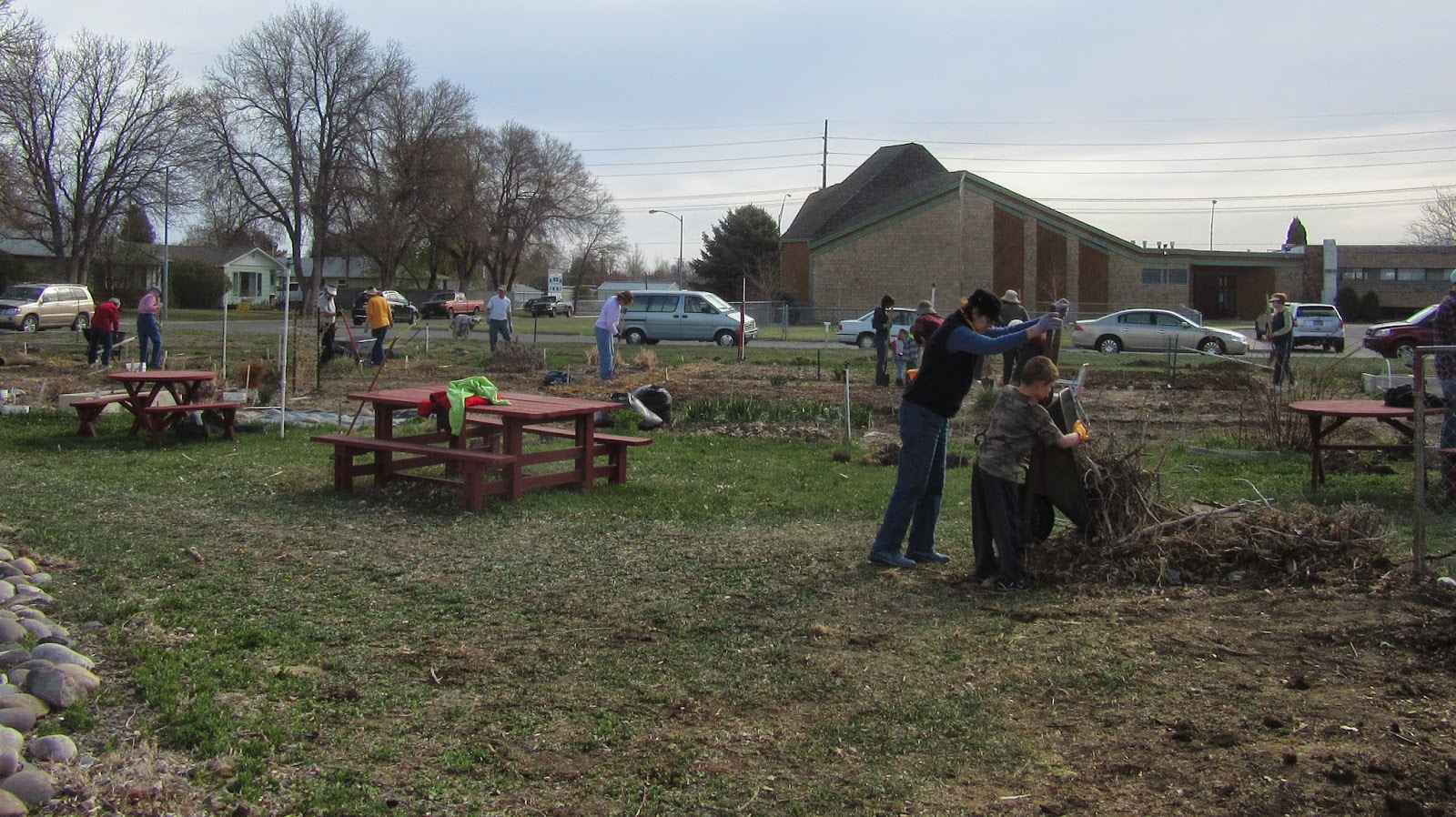 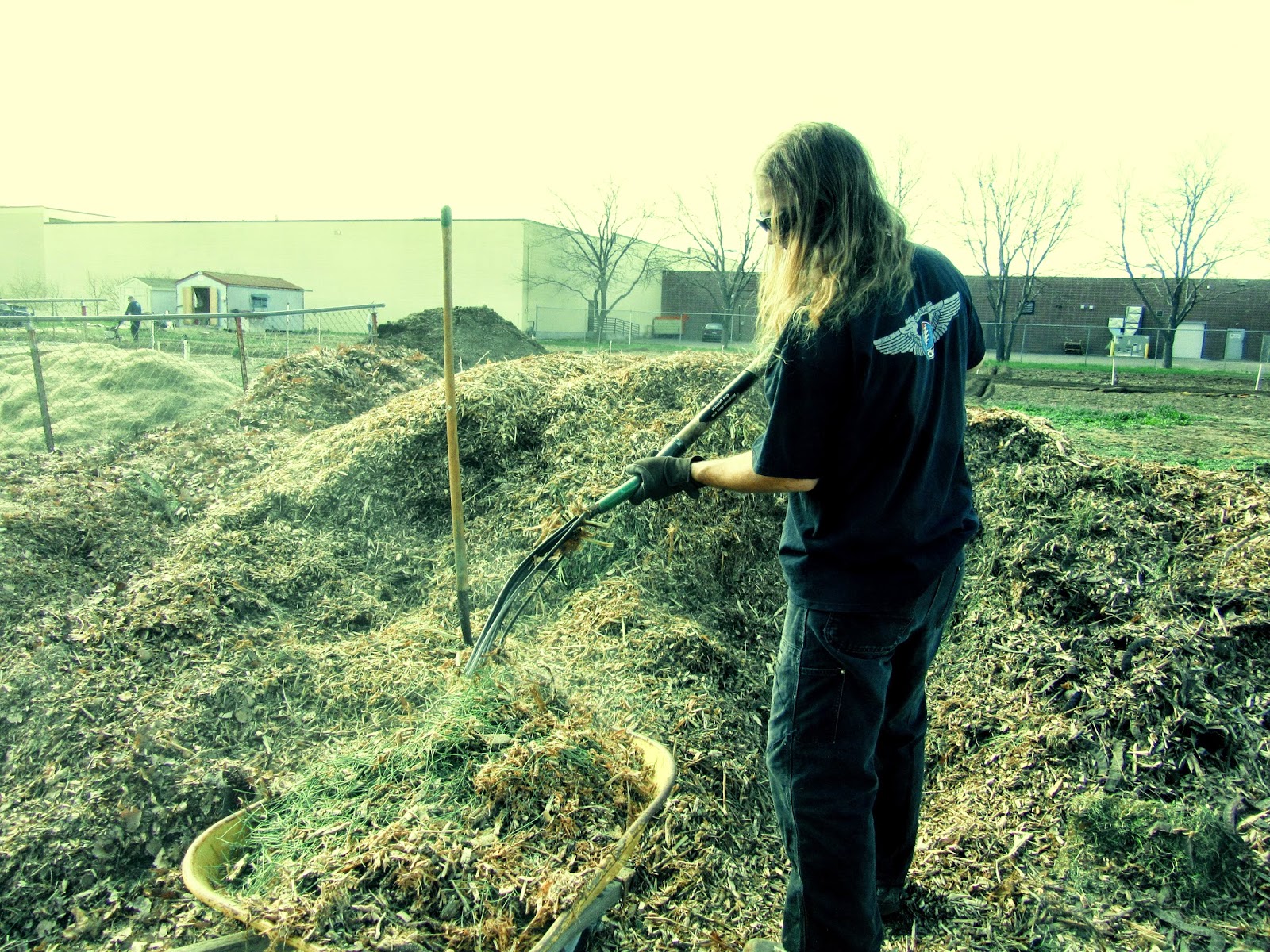 Ginger cannot get enough of the outdoors this year.  She didn't go out last year at all.  This year is a different story.  She adores the backyard.  So much grass to nibble, earth to roll in, and smells to smell.  She is not sure about the garden house.  The water coming out intrigues her, but the way the hose moves through the grass really seems alarming.  Like a giant snake, maybe.  I don't know. 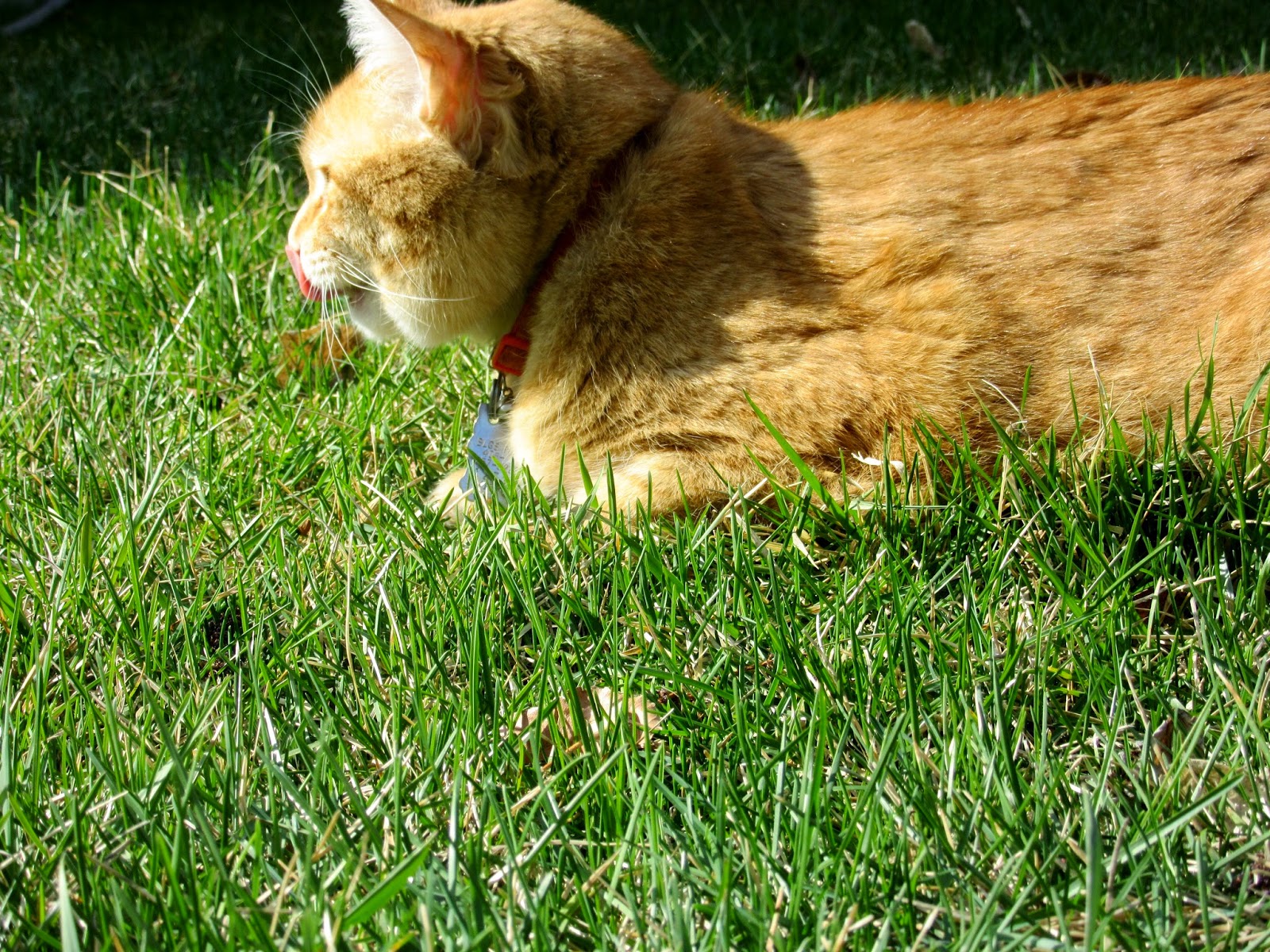 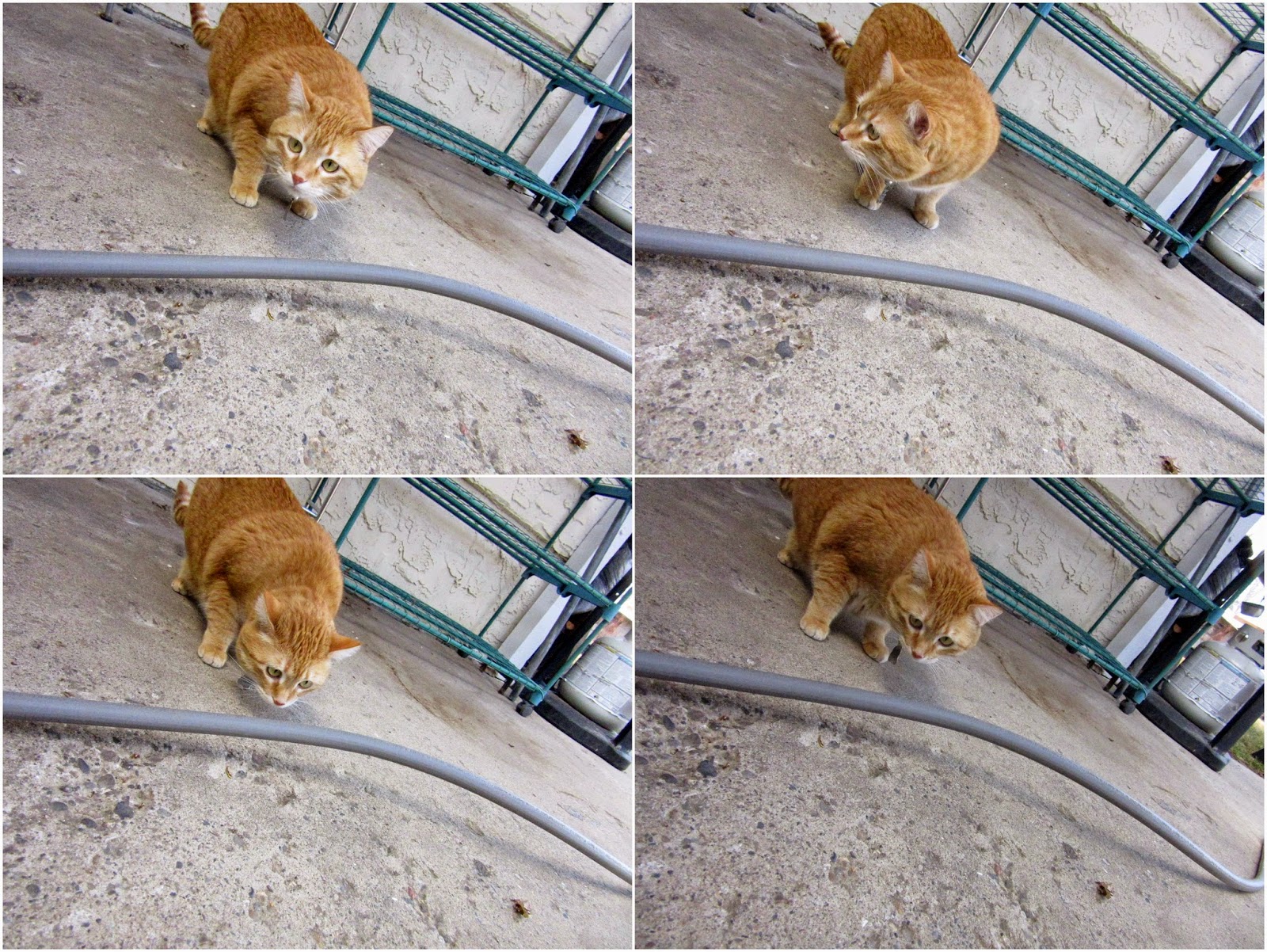 We've eaten a few meals off the grill.  Oh!  That fabulous grilled taste!  I'd not realized how much I'd missed it. 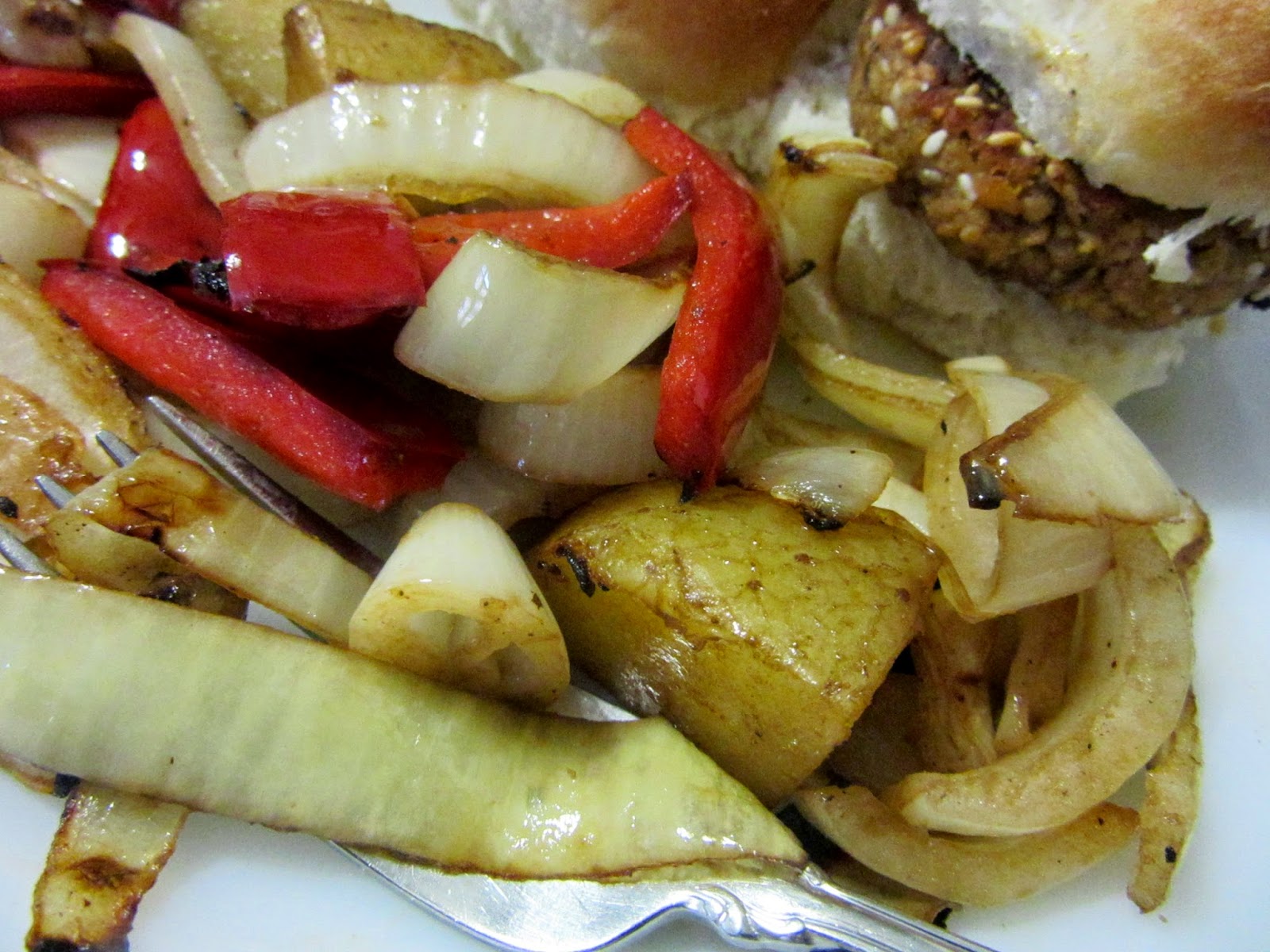 I'm enjoying the walks and bicycle rides all the more in the sunshine with the air sweet with the fragrance of the blooming apple and linden trees.  Of course, yesterday I rode home with a very, very wet behind after a spring storm left my bicycle covered with snow on Wednesday! 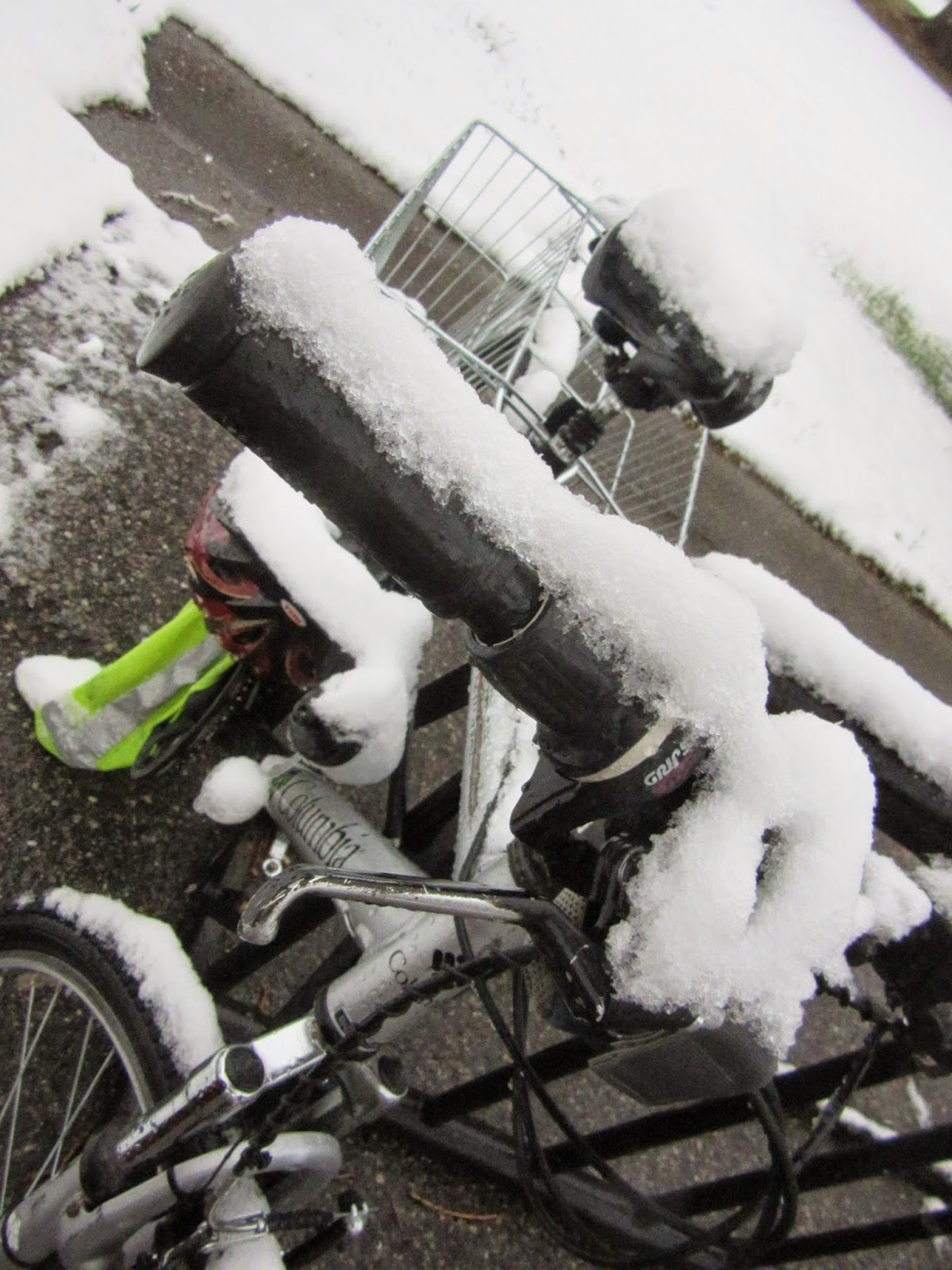 And that is how the garden grows at this moment.  It changes so fast at this time of year.  Ah, spring.  Glorious, glorious spring.... 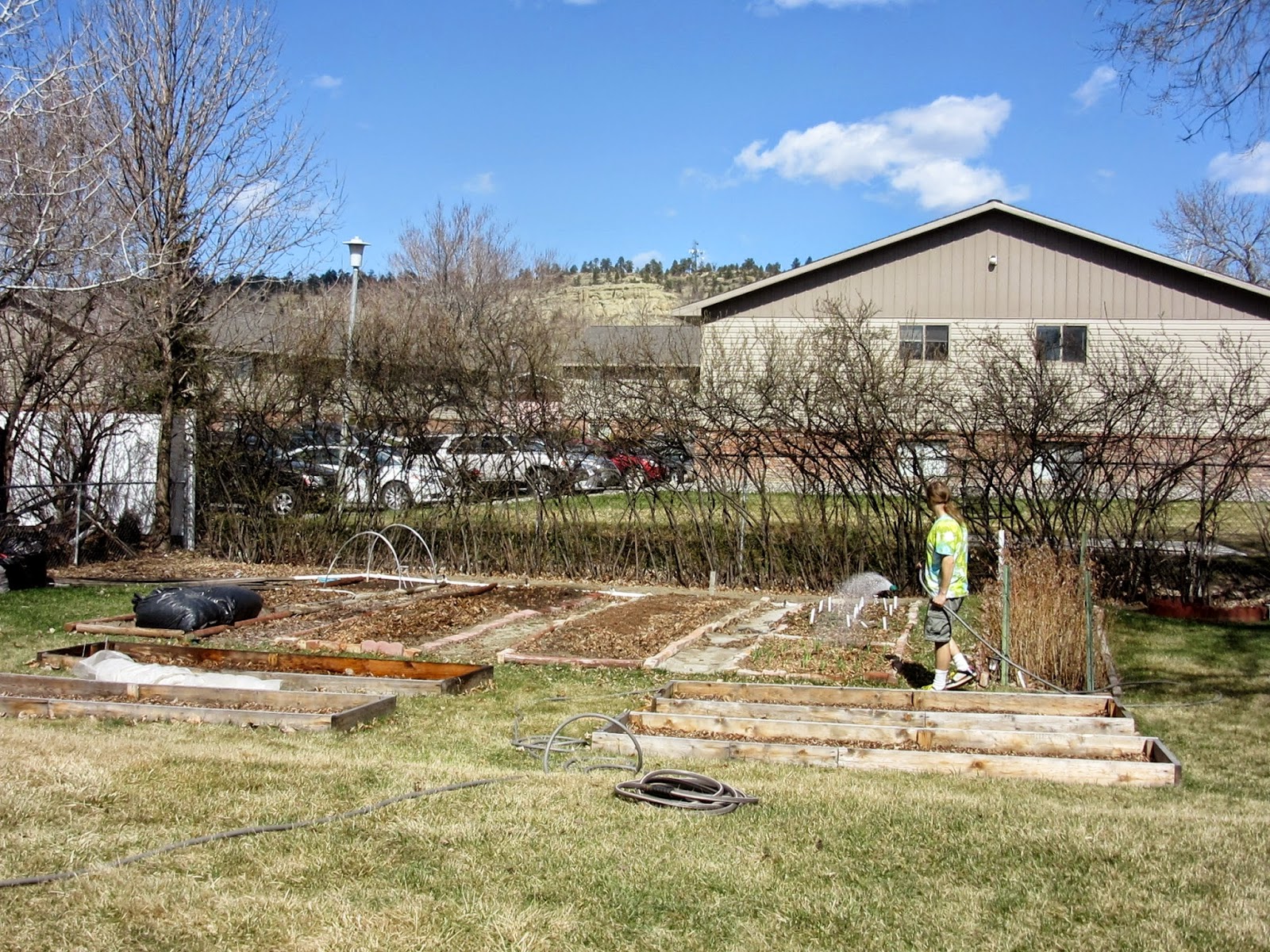