Matt and I have been birding for some time now and had never seen an owl in the wild...until this morning! 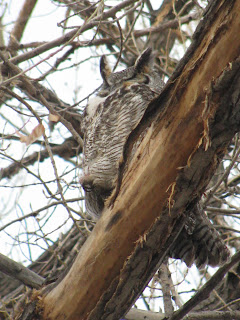 One of the volunteers at the library mentioned that she had seen an owl recently and gave me some general directions to find the spot.  I wasn't really holding by breath that this would work, because well, you know, birds move a lot.  I've tried to follow directions to other birds and never found the ones I was looking for (lot of other cool stuff though).  But, it was worth a shot and it would be a nice walk along the river in any case. 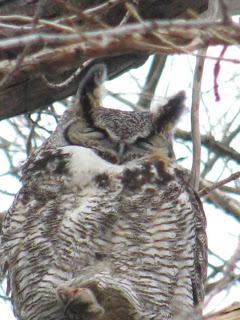 Her directions were something like "Cross the bridge, go right, go to the second bench, it was in a tree right above the bench."  So, we are walking along and I say "Oh, there is the second bench."  We take two or three more steps and Matt stops short and points.  Here was a stunning Great Horned Owl dozing on branch.  She was in a tree directly across the path from the bench.  In other words, the directions were spot on. 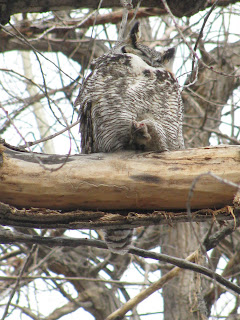 We were elated!  Finally a wild owl! A great big one! 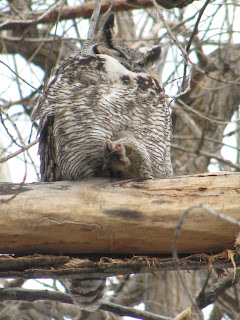 And she has a serious set of claws on her!  We even thought we could see some blood on her claws still!  (Enlarge the photo and you tell me!)  We of course dug out the bird books when we got home and learned that great horned owls can basically eat anything smaller than they are: rabbits, lizards, other birds, skunks, snakes, mice, occasionally fish.  They've even been seen trying to attack a porcupine.  These birds aren't foolin' around.

We also saw a flock of hundreds of ring billed gulls which is something I've never seen around here.  A few here and there are normal, but this had to be several hundred...squawking...loudly.  They were joined in their loud squawking by the countless Canada geese who were particularly noisy and aggressive this morning.  It is about that time though.  We also saw a pair of common mergansers, a song sparrow, a raccoon, too many mallards to count, and of course the ubiquitous crows, robins, and starlings.  We also heard a woodpecker, but were too fascinated by the owl to bother chasing after its drumming.

What a great way to start my day!  Matt and I are hoping that this ushers in the year of the owls for us.
By BLD in MT