We've now picked and shelled more than three pounds of peas so far this season.  We had our first harvest Thursday and a second harvest last night. 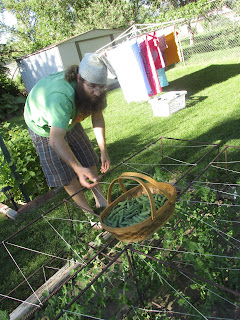 Three pounds shelled.  Yay.  That's more than last year and I do believe we'll get at least one more picking out of those vines yet.  Maybe more.  Then the vines will be torn out and composted and the bed replanted with squash and tomatoes (or that's the plan at this point, but as with all garden plans it is subject to change).
I think the sound of those first peas hitting the bottom of my shelling bowl is really grand.  It makes a satisfying little tinkling noise against the metal that fades as the bowl fills up and muffles it.  To think we put a few of those little guys in the ground in late March and from them sprung all these! 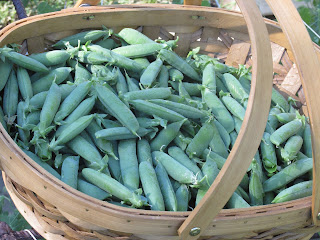 I like the way the inside of the pods feel as I slip my thumb down  between the split halves of the pod and nudge the the peas out the bottom where they can tickle against the bottom of my bowl.  The inside of the pod is so smooth, cool, and silky with just a slight slipperiness of moisture.  I think it feels good.
As we shell the pods Matt keeps tabs (and asks me to keep tabs) on how many peas are in each pod as a sort of personal contest or source of curiosity.  He likes to find out what the fullest pod will be.  I guess he finds it fascinating to see just how many peas are possible.  Both harvests this year the most we've found was eight in a single pod.  That's pretty good. 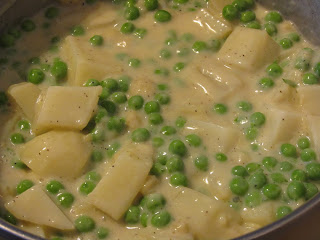 I've also eaten creamed potatoes and peas three times already.  But, not with homegrown potatoes yet. They're still not quite ready.  But they are looking good.  Matt thinks we had 100% germination success with potatoes this year.   Yay.   The more the merrier, I say.  I am a potato fanatic. 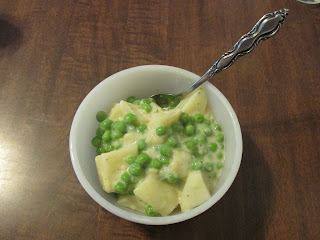 I have a photo hanging at home in a round, vintage, wooden frame of Matt and I shelling our pea harvest into a cereal bowl in 2011.  Actually, you can see the photo in the middle of this post here.  I am glad the scale of our harvests have so increased that we had to seriously upgrade bowls.  We'd have needed many cereal bowls last night to get the job done.  Its nice to think we can eat the peas fresh AND still have some to freeze for later, too.   That is a super gardening bonus.  Fresh now.  Fresh frozen later.  Those peas will taste SO good in a warm vegetable soup some cold January evening.

But, I don't even want to think about that yet.  Its 80 degrees out and that makes me happy on this June summer day.
By BLD in MT