We went to Yellowstone in July.  Yeah, smack in the middle of crazy tourist season.  We'd never done that before.  In July the park gets an average of almost 900,000 visitors.

I must admit that I lost my cool about it.  All I wanted to do was get out of the car and go hiking.  I'd been looking forward to it all week.  But, the hikes we'd planned were foolishly close to the Old Faithful area which meant we had to drive a good ways through the park to get to them.  Foolishly close for July.  Back in May it would have been a piece of cake.

Oh, the traffic!!!  I was very frustrated by it and had an uncharacteristically hard time shaking my grumpiness.  I should have expected it, but alas, I did not. May and September visits fooled me.  In May 2013 there were less than 300,000 people to visit the park.  That's a pretty significant difference.

But once we got out a good ways out into the woods my mood was much improved.  How could it not be on a hike that strolls through trees and flowers, past waterfalls and geysers, hot springs and ponds, and open meadows with mountains on the horizon all around?

The hike was breathtaking.  Grand Prismatic Spring, Fairy Falls, Imperial Geyser, Imperial Meadows.  It was absolutely gorgeous.  We'd been wanting to take it all year, but it is closed until Memorial Day because it is a bear management area.

We started out from the Fairy Falls Trailhead 4.5 miles from the Old Faithful overpass.  The first part of the hike is on the historic Fountain Freight Road.  Once designed for automobiles this road is now traveled by foot and bicycle.  The road follows the Firehole River.  One quarter of the flow of this river comes from geothermal features making it a mix of warm and cold water that never completely freezes up in the wintertime.  Neat-o.

The Midway Geyser Basin came into view and we were immediately excited as this was the primary reason we chose the Fairy Falls hike.  The Midway Geyser Basin is home to the mind blowing, mesmerizing, miraculous Grand Prismatic Spring.  It is the largest hot spring in the park and the third largest in the world.  Its dazzling blue-green pool is 370 feet across. 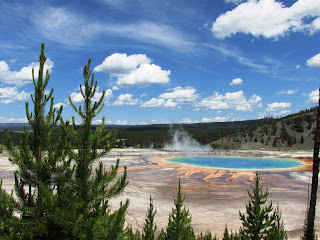 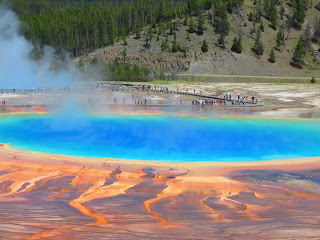 We'd seen it before from the Midway Basin boardwalks, but you can't really appreciate it from surface level. There are several spur trails up the ridge beside the Fountain Freight Road where people have scrambled up to get that perspective on Grand Prismatic.  We, naturally, scrambled up ourselves.  I was not prepared for the beauty of the sight from that higher vantage.  It is just too magnificent to possibly be prepared for, I think. 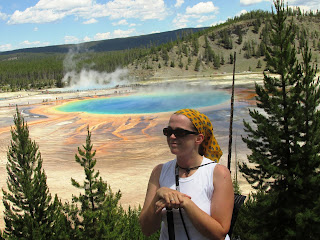 We stood on the ridge and gazed in wonder at the spring for a good long while.  It was interesting to note how the colors changed as the sunshine peeked in and out from the clouds.  I was so glad it was a sunny day.  When the sun hits that pool just right it sparkles and glows with an essence beyond description.   We went back down to the road and continued on. 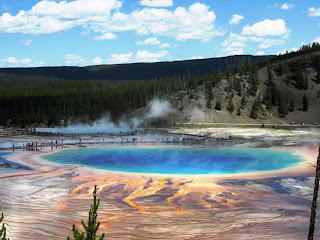 At just under a mile the road meets the Fairy Falls Trail.  We turned left at this trail sign and it was just a bit more than 1.5 miles to Fairy Falls after that.  The forest surrounding us is part of that which was burned in the big fires of 1988.  It is growing back wonderfully, but the trees are still relatively short allowing a nice open view of the big, blue sky overhead.  We watched the birds and bugs flitting about, especially these peculiar looking dragonflies which neither of us had ever seen before, but were quite eye-catching.
The flowers were even more eye-catching.  Pinks, red, purples, blues, yellows, whites, orange, and every single shade it seemed.  We kept thinking we'd seen all the different varieties and then we'd find still another!  In addition to the flowers in the photos below we were noted Showy Daisy, Lanceleaf Sedum,  Snapdragons, Western Springbeauty, several kinds of Indian Paintbrush, bluebells and more.
As we continued along the trail we both suddenly could hear running water and so knew we must be close.  Before long Fairy Falls came into view tumbling 197 feet down over its lava cliff into a lovely pool below.  The water crashes on various ledges on its way down sometimes making a sound like that of a rumbling freight train with the force of the water on the rocks.  The cool mist from the falling water was refreshing on my skin which was warmed with sun and hiking.  Natural air conditioning. 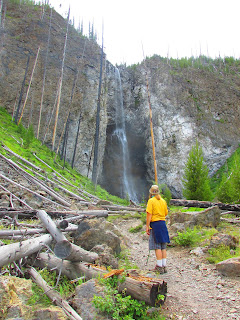 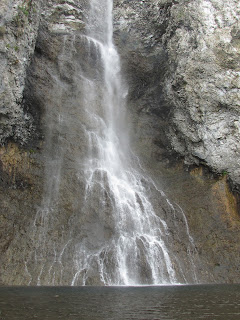 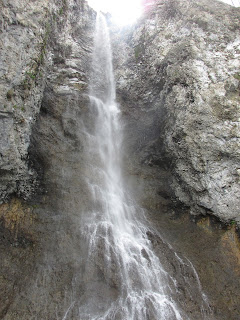 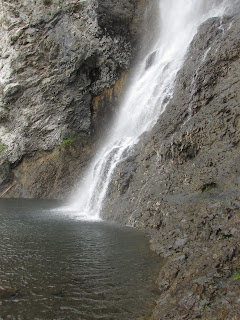 There was quite the crowd at the falls--probably twenty or so people.  Children were splashing in the pool a the base of the falls.  I considered joining them in their splashing, but in the end did not.  I stared up at the falls and was amazed at the power of water to have carved out such a marvelous thing as this.  I still wasn't really in the mood for people though and so we didn't stay as long as we might have otherwise. 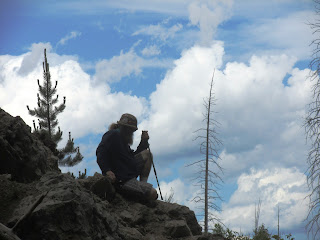 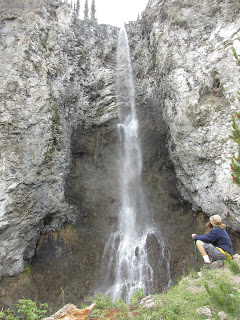 From Fairy Falls we continued 7/10th a mile along the trail to Imperial Geyser, stopping to smell the flowers along the way. 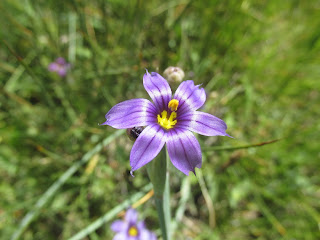 Imperial Geyser once erupted for four to six hours at a time and to heights of up to 150 feet.  It has been through long periods of inactivity, but at the moment seems to be showing some signs of life again.  We sat in the shade of tree and watched the geyser for more than an hour.  Not a single other person happened by.  I guess all the folks at Fairy Falls turned around and went back after seeing it.   I can't help but feel the really missed out. 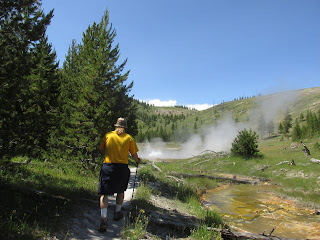 As we watched Imperial Geyser had almost continuous minor eruptions of approximately two to forty feet in height.  We used a tree on the far side of the geyser as a scale.  I timed some of the eruptions.  It seemed there was an average of 18 seconds of pause between eruptions, but each eruption was on average almost five minutes long--except for a short series where it erupted for one minute, paused for 15-18 seconds and the erupted again for another minute several times in a row. 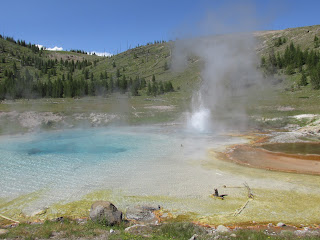 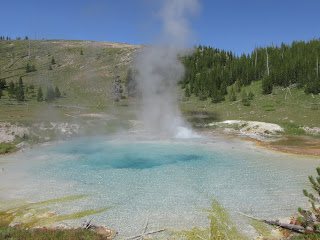 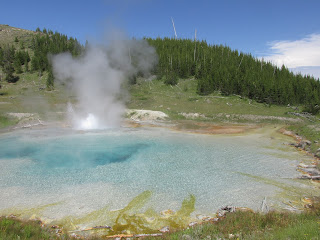 There were a few other geothermal features in the surrounding hillside.  It was a bit bizarre to be out in a thermal area like that with no boardwalks or danger signs.  Out in the backcountry one just has to use common sense.  In theory that should hold true anywhere, but signs are really needed in the densely populated areas. 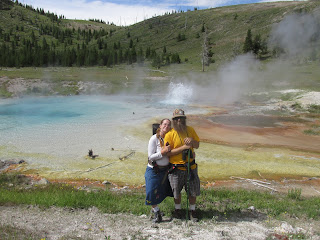 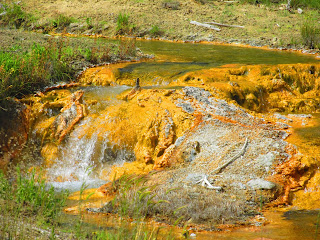 After realizing that we could sit in the shade and watch geysers all day Matt and I decided to hit the trail again as the afternoon was already growing late.  We had to backtrack about 3/10th a mile to where the Fairy Falls Trail meets up with the Imperial Meadows Trail and instead of going right and back the way we had come we took a left and headed out into the meadows. 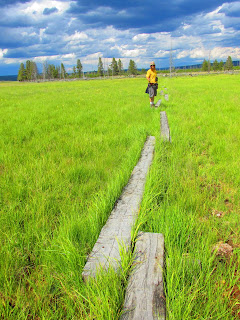 The meadows were amazing. They provided huge, wide-open vistas in all directions.  We could see a bison grazing miles away.  The flowers and grass extended in a glorious colored carpet.  We could see steam rising from geysers in the surrounding countryside.  In fact, we had to cautiously pass through a few thermal areas along the trail.  At one point we thought we had a problem because it seemed the trail dead ended into a thermal field.  But, upon closer examination we found the trail again and passed safely through it. 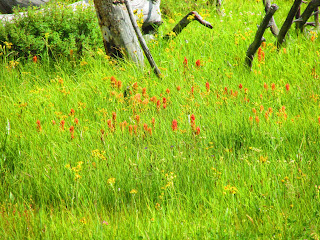 The open view also meant that we could see a real mean-looking storm coming in when we were still many miles from the car.   So, the last bit of the hike was a bit hurried and there are not really any accompanying photographs.  We even jogged a bit.  Lightning storms in the backcountry can be a bit nerve-wracking.

After 2.5 miles the Imperial Meadows Trail rejoins the Fountain Freight Road and we left the meadows and returned to the baby pine forest.  The wind was whipping up some serious whitecaps on Goose Lake as we passed by.  The sky was growing dark all around us--except directly ahead of us on the trail.  That was really the only encouraging sign.  It was raining good by the time we made it back to the trailhead.  Matt had (oddly enough) found a wide brimmed straw hat along the trail which came in quite handy to keep the rain off his face.

When we got back to the Midway Geyser Basin it was like a whole different place.  Gone were the throngs of people on the boardwalks around Grand Prismatic.  Gone was the dazzling blue of the waters.  Gone was the bright, happy blue sky with puffy white clouds.  It was all grey and quite windy.

I was quite a case of contrasts too since I was mean and stormy feeling when I hit the trail and light and jolly, despite the rain, as we finished up.  Nature is like a balm for my spirit. 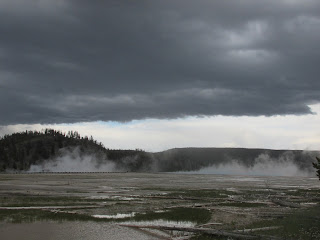 All told it was 8.2 miles or so.  And it was fantastic.  I should like to do it again sometime.
By BLD in MT