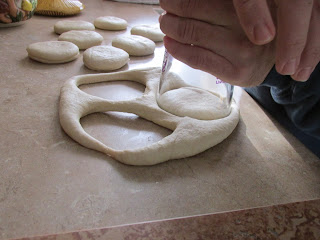 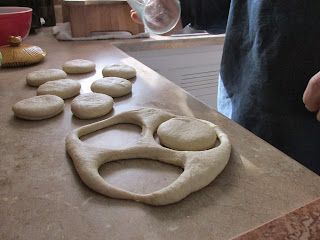 Matt made some sourdough English Muffins based upon the recipe from The Cottage River Bread Handbook.  That recipe doesn't call for making the muffins sourdough, but, you know, Matt is on his sourdough bender.  Hey, no complaints here. 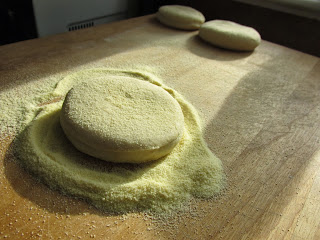 We'd also been making a variety of savory jellies.  One of the jellies--the roasted garlic jelly--involved roasting a head of garlic and combining it with balsamic vinegar, and crushed pepper corns.  When the jelly is made, however, all this is sieved out so that the jelly is light golden in color and not full of weird chunks.  But, when Matt was about to tip the sieve into the compost bin he hesitated.  And we decided that balsamic drizzled, pepper-corn encrusted roast garlic actually sounded kind of tasty. 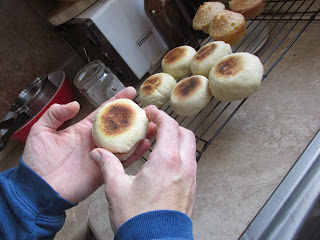 It really was, too. 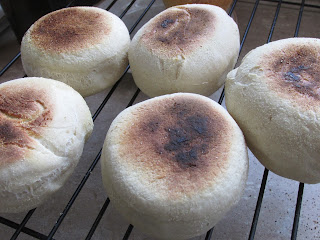 I also must admit to a little thrill in my heart at finding a use for what was supposed to be cast off as inedible. 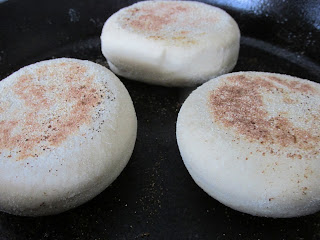 The roast garlic flavor was amazing and had a really creamy mouth-feel to it.  The vinegar was quite sharp, but the peppercorns has not nearly as much bite as we had thought they would so it all evened out.  We mixed it with a little bit of olive oil to make it more spreadable.  As such it reminded me of when I've had fresh bread dipped in an olive oil-balsamic vinegar mixture as an appetizer. 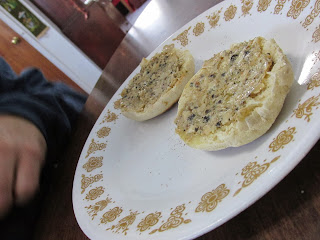 The English muffins were really good, too.  Apparently the secret to the distinctively lightly floured crust is dusting the whole thing with semolina flour.  It was noticeably different than when things are dusted with regular wheat flour.  Also, they were cooked in the cast iron over the stove top instead of being baked in the oven which I found rather interesting. 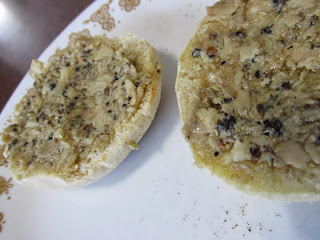 They weren't as light and porous as store-bought English muffins, but they were scrumptiously fluffy and tender and disappeared quite quickly spread with roast garlic.
By BLD in MT