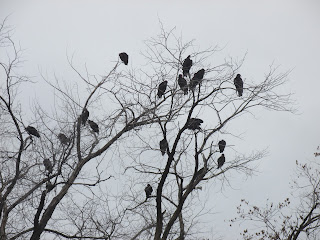 There is a tree in my hometown that is the night roost for a flock of Turkey Vultures.  My friends noticed it while walking their dog through the park.  It was mentioned to me when I was visiting in July.  But, I've seen many a turkey vulture and time was limited and so we never did walk over to see this turkey vulture tree.  But, when I was back for my class reunion last weekend it came up again and I was told there were like 30 of them.  Okay, okay...I've seen lots of vultures, but 30?!  In one place?!  I'd never seen that.  So, we rallied and a small group of us went to the park to see them around dusk.

Turns out 30 was a major underestimation of their numbers.  I counted to 47 before I lost track as they swirled overhead.  It could have been upwards of 60 birds, I'd say.

They'd been roosting and when we walked up to check out the tree they took off one after the other and in groups--they just kept coming and coming--until they were nearly filling the sky overhead.  Circling, circling, circling.  All silently.  It was amazing and just a shade creepy.

I was giddy.
The next day Alli and I again walked over (the dog needed walked and I wanted to see the vultures again) to see the vulture tree.  There were fewer that I could see (though they could have been hidden in the pine boughs because I would never have thought there were that many the first time).  Alli's dog rolled in turkey vulture droppings.  Oh, it was terrible.  Such a smell!!  Oh my....

Turkey vultures are fascinating, disgusting, and bizarre creatures so perfectly suited for the life of scavenging. Think of all the decay that would lie about on roadsides and field were it not for creatures like this.  Think of the wonder of a gut and head perfectly designed to eat rotten, putrid things.  Of the ability to smell their next meal from miles overhead even when it is completely out of sight.  Of a bird without a developed voicebox rendering it nearly mute.  Of using projectile vomiting as a defense mechanism...because, think about it, they eat rotting stuff.  Of wings and flying skill that permit soaring with hardly a flap.  They are amazing.  And gross.  I find even their grossness pretty amazing.

I felt honored to watch such a flock soar round and round.  And a little afraid of getting pooped on as I stared up at them whirling overhead.

It was really something.  I'd never seen anything quite like it.
By BLD in MT