During the first wave of strawberries earlier this summer we made cupcakes for a friend's birthday and topped them with fresh strawberries which had been mixed with just a hint of sugar to help release their juices and make a really nice topping.  The photo from that little celebration is at the bottom of the Recipe Links page.

In addition to cupcakes with Laurel and friends though we had enough of them to have dessert just the two of us the day before.   We always joke that we have to try everything first before we feed it to other people, just in case its dreadful....which thankfully it never is hence the joke.  Matt decided to try something a little fancy that he'd seen somewhere--stuffed cupcakes! 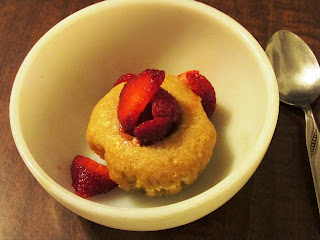 Preheat oven to 350 degrees F.
Line a muffin tin with cupcake liners.
Add the vinegar to the milk and set aside so that it can curdle and thicken.
Combine soymilk mixture, oil, sugar, and vanilla.
Add in remaining ingredients and mix until smooth.
Fill cupcake liners about 2/3 full.
Bake for 20-24 minutes until a toothpick pulls out cleanly indicating they are done in the middle.
Move to a cooling rack.

If desired cut out the center of the cupcake, eat center immediately, and stuff with sliced strawberries.  Garnish with additional strawberries if you wish. 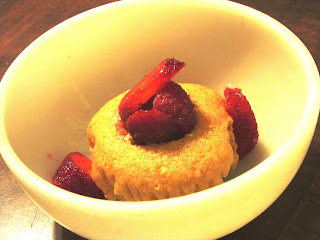 In the end both variations--stuffed and unstuffed--were great.  I mean, its cake and strawberries for heaven's sake.
By BLD in MT