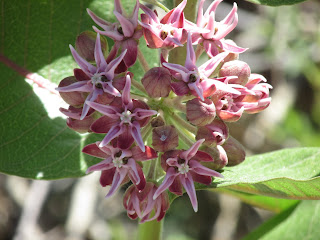 My friend and fellow "bird nerd" (his term), Carlin, is working out at Pompey's Pillar National Monument this summer.  He posted a photo online of a nest with a parasitic egg in it--wait, let me explain a minute:  Some birds do not make nests of their own.  Instead they sneak into the nests of other birds and lay their eggs there, sloughing off the work of incubating, feeding, and otherwise bringing up a baby bird.  The nesting bird typically raises the parasitic egg as it it were her own though sometimes she catches on and kick the parasitic egg out.  Quite often though its comical because the parasite (Brown-headed Cowbirds in this case) are so big and the host (Lazulli Bunting in this case) is so small.  The baby will quickly outgrow the "mother."  The cowbird also tends to out-compete nestmates because of the size advantage which can cause the host nestlings to perish from lack of food. 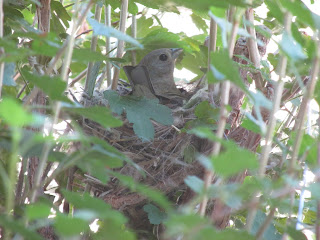 Its always seemed pretty fascinating to me.  Brutal and remarkable as the workings of nature so often are.  But I'd never seen it with my own two eyes.  And then Carlin posted a photo from Pompey's Pillar of a small nest with two eggs in it--one blue and one brown.  I was immediately excited and he agreed to show me the nest if I came out to the pillar. 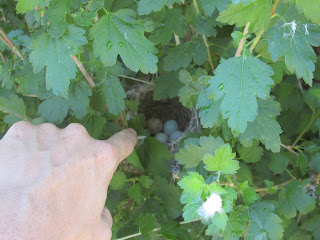 By the time I got there the Lazulii Bunting had laid two more eggs, snug in the nest alongside the speckled brown cowbird egg.  The female was sitting on the nest which was along what seemed to be a main foot trail in a shrub that was hardly more than waist high.  It seemed such an unlikely spot to choose, but I am not a bunting...what do I know?   We never did see the more stunning blue colored male, but oh well, we'd never seen one at all before--male or female. 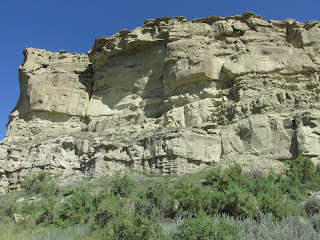 After showing us the nest and watching birds and chatting for a while Carlin had to get back to work and Matt and I took a stroll around the pillar.  We watched White Throated Swifts circling about overhead along the cliff's edge for a long while.  We'd never seen them before either. 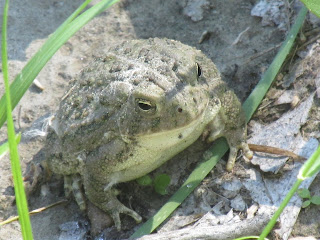 It was wonderful except for the swarms of mosquitoes which were ruthless and relentless in their blood-sucking.  There were birds everywhere to watch, but it was hard to get them into frame in the binoculars when you had to slap away a mosquito every five seconds.  We forgot our repellent and were very unprepared and defenseless against their onslaught.  I am sure the booming insect population was great for critters like the toad we crossed paths with and all those insect-loving birds though.  I came home with easily more than a dozen mosquito bites. 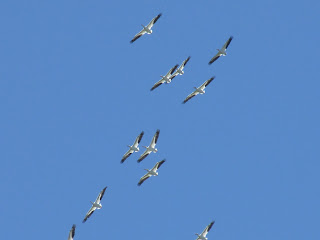 We saw a large flock of American White Pelicans.   They look all white when on the river scooping fish up as they glide along the surface, but they have conspicuous black wing tips when soaring overhead.  It makes them easy to spot.  They also have the longest wingspan of any bird in Montana which makes them pretty easy to ID as well--some wingspans are nine feet across. 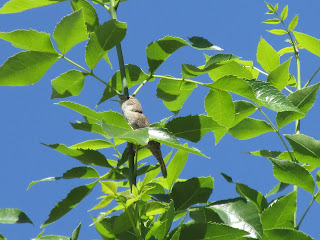 A House Wren gave us quite a concert from a small tree.  It was quite dazzling.  And if I can capture a bird with its mouth open, singing its heart out, I am always so very pleased.  It always amazes me how such a small little thing as this bird--which weighs only about as much as two U.S. quarters--can sing like that.  They produce so much sound and it carries so well.  Its pretty much miraculous. 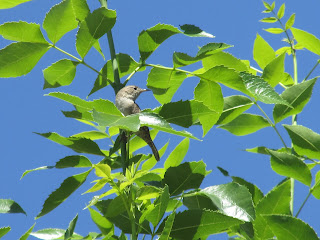 Matt and I agreed we'd have to visit the pillar more often.  It is quite the hotspot for birds and not too far from town.  We will have to be sure and pack the insect repellent next time though.
By BLD in MT