Matt loves his alpaca socks.  I bought them from Alpacas of Montana at one craft show or another we were vending at.  They were Matt's birthday gift years ago.  And he wore them every single day because they were the best socks he'd ever owned.  As a result they wore out.  Even a high quality garment will wear out in time with extreme use.  I snagged them from him just before the holes really started to form.  The socks were threadbare, but I couldn't poke my finger all the way though or anything.  So I thought I'd try my hand at darning them. 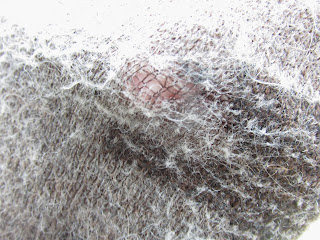 I bought a skein of alpaca yarn from a different and smaller scale Montana producer at one of the craft shows we vended at last year.  I wanted to patch the alpaca with alpaca.  The fellow who sold it to me was quick to pull out a photo album and point out Thackery to me--the source of the fiber in my hand.  "He's a nice, ol' boy," the man told me showing my other photos of Thackery in a bright green pasture with his fuzzy alpaca friends.  You could really tell how genuinely fond the rancher was for his stock.  It was sweet.  And now I know a little bit of the story of the people and animals behind the finished product, which I think is great. 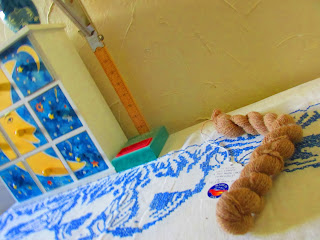 I'd not done much darning, really, but I consulted a book from the library and went at it.

I used a plastic embroidery needle and the Thackery yarn and stitched a circle around the area where the hole was developing well beyond where it started to grow thin.  Then I went back and forth across the area I'd circled first horizontally and then vertically.  I don't know that it's the most aesthetically pleasing way to darn, but its seems pretty strong and Matt says it feels fine underfoot.  So, really, it is on the bottom of his feet--who cares what it looks like?! 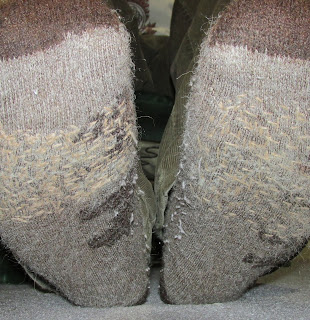 But, he's worn them out in another spot now...so they're back in my mending basket once again.  There is still plenty of Thackery yarn to patch him up again though.

I also darned a couple of pairs of generic, store-bought, knee-high socks because the top seemed in such good condition it seemed a shame to waste them because of a hole in the sole.  But, I've decided that is more trouble than its worth.  When I am knitting all my own socks it will be a different story, but for now I am reserving darning for handmade socks.
By BLD in MT