Matt's brother Ryan and his wife Bek, hosted a barbecue over the 4th of July Weekend.  Matt's folks came over as well as a slew of Ryan and Bek's friends.  The backyard was a buzz with people.  It was a gloriously warm and sunny day to spend outside. 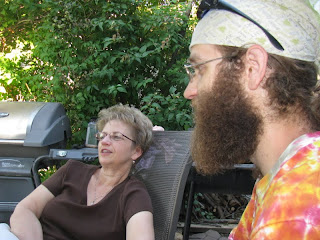 So sunny in fact it made playing badminton a real challenge!  Ryan slaughtered me in a 21 - 1 game.  The first half I tried to blame on the sun, but when we switched sides half way through and I still didn't recover it seemed pretty obvious it was just me.    Ryan beat Matt 21 - 4.  Apparently we need to work on our hand-eye coordination! 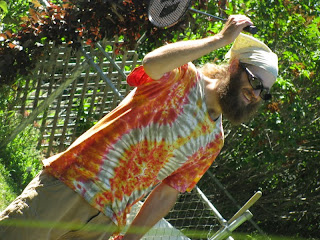 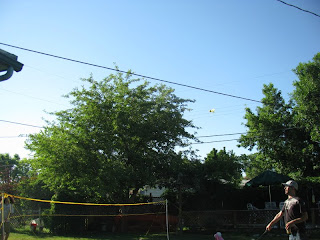 Ryan seemed pretty stoked to be using his grill and smoker.  I thought the smell of smoked fish was pretty hideous myself, but it again must have just been me as the smoked fish was all gobbled up.  Matt made more kabobs.  I've eaten more kabobs this summer than I have in my entire life.  I am quite happy with that turn of events.  Kabobs rock.  Barbecuing rocks. 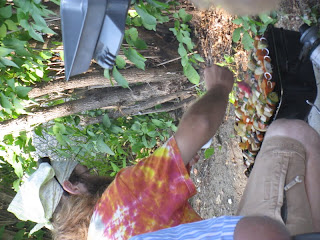 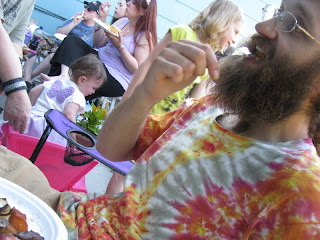 Bek invited one of her friends who does fire hooping to come and perform for us.  I am always impressed by people who can do this.  I can make a hoop go around, but I can imagine trying it with fire involved...while doing tricks!  She did singe her hair at one point.  I think I'll stick to watching. 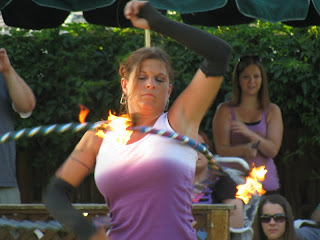 There was a adorable girl (in a fairy outfit!) there named Teigan.  I thought this was interesting because my buddy Derek's little girl is named Teigan and that was the only Teigan I'd ever heard of.  It was also interesting because she wasn't initially scared of Matt (and his big beard) the way most babies/toddlers are.  He was squatted down by the grill and she walked right up to him and shook his hand.  Seriously. 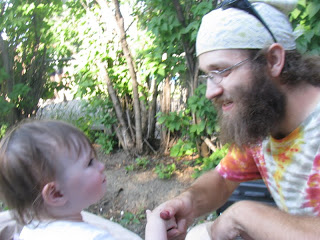 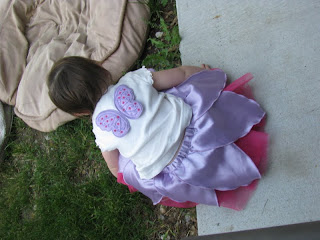 I was able to check out Ryan's new garden (put in this year) and things are certainly coming along nicely.  I really should have taken a photo of it, but apparently dropped the ball.  I know Matt is quite excited his brother is now gardening too.  Someone new to talk garden with!!!  Ryan and Bek must both be pretty excited too because I saw many people getting the garden tour.  It is rightfully exciting.