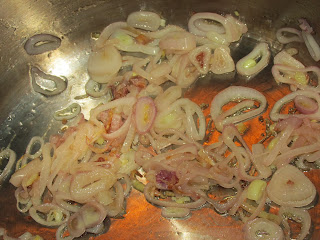 Sometimes when Matt cooks he likes to pretend he's on his own cooking show.   He'll prep all the ingredients in little dishes on the counter before he begins the actual cooking.  I have to agree with him that it is both efficient and attractive to have the small bowls of chopped veg, grated ginger, blended spices just ready to go.  This was how our first batch of Eggplant-Peanut Soup came to be.  We've since made, I think, three more batches, but only the first got cooking show treatment.  Even without the fancy prep work though the dish is fantastic.  It still tastes pretty fancy, decadent, satisfying. 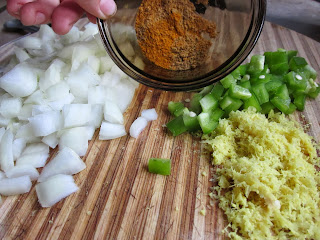 We first started experimenting with this soup recipe because we had quite a number of eggplants from our garden that had been harvested before the first frost and needed to be eaten.  It was a nice surprise how many eggplants we ended up with, actually, because we thought there we only three of them on the plant.  But, since the eggplants were growing at the community garden this year I guess we just weren't paying close enough attention to them and the fruits they were putting out.  In the end, there was something like a dozen of them.  I don't know how we missed them in our observations of the growing plants.  But, hey, I'm not complaining.  I really enjoy eggplant.  The more the merrier. 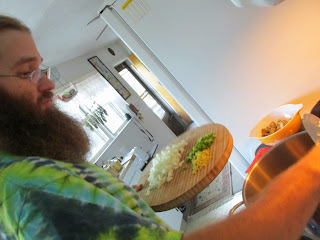 Toss the eggplant with the salt in a colander.
Let it sit at least 30 minutes to soften and release extra water.
Rinse eggplant and drain well.
While the eggplant is doing its thing preheat a large pot and start the shallots/onion to caramelize in the oil, cooking about 20 minutes until they are tender and browned.
Remove, set aside, and start sauteing the eggplant, adding more oil if needed.
Cook eggplant 10-15 minutes, until starting to get tender.
Add in diced tomatoes and cook for another few minutes.
Add the shallots/onion back in to the pot as well as the spicy pepper, ginger, tomato sauce, and spices.
Stir well and let heat through.
Add the peanut butter and stir until it is completely blended into the soup.
Simmer another 30-45 minutes until the eggplant is very tender.
Add in lemon juice.
Salt to taste.
Serve. 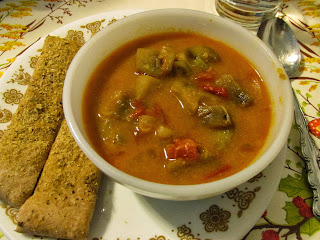 We made it three times in the same number of weeks.  It was just that good.
By BLD in MT