Overall the 2013 was a smashing success.  We expanded the garden again.  We grew things we'd never tried to grow before.  We had plenty of rain and sun.  But, as with every year there were some things that didn't go as hoped.  We had a pretty disappointing potato harvest this year.  That is the way it goes sometimes, I guess.  We had our best ever crop of onions and summer squash and our worst ever for potatoes and tomatoes.  Unfortunately for me I simply adore potatoes and tomatoes.  So, I am disappointed.
We harvested our first potato from the 2012 crop on September 2nd and we finished eating the last of our 2012 potato crop on February 20, 2013.    That is six months of homegrown potatoes!  Well, this year we harvested our first potato on July 25th, hoping for enough to make some creamy new potatoes and peas.   The plants hardly had any potatoes on them though so we didn't harvest again until October 19th.  We finished eating the last of the 2013 potato crop two weeks ago.  That is just over one month of potatoes.  We didn't even make it to winter let alone into the new year.  But, it is what it is. 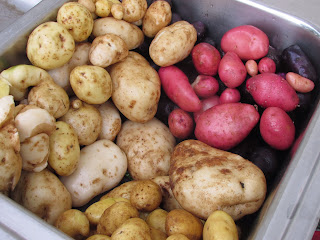 We have a theory on why the crop was so lackluster this year.  See, when we moved in most of the garden space was just being used as a dumping ground for grass clippings.  This year when we planted the spuds they went into the ground in just such an area.  We're thinking perhaps the soil is too nitrogen rich still at this point on account of the years of grass clippings to encourage great root growth.  The tops of the potatoes were thick and green and very healthy looking, but under the soil there was very little action.  We're moving them back to our plot at the community garden next year.  Potatoes do super there.  We're going to plant the leafy greens in the nitrogen rich soil since they should do well under such conditions.  Of course, this is all speculation on our part.  Maybe it just wasn't our year for potatoes.
I told Matt we might have to break down and buy some potatoes though.  I already miss having them around--mostly for breakfast.  I would eat potatoes with breakfast every single day, I think.
By BLD in MT