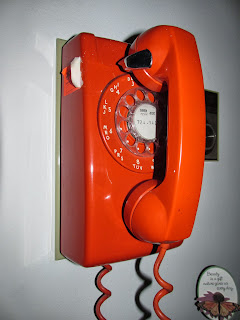 I went to a family wedding on my mother's side over the weekend up on the Highline.  It was considerably colder than down here on the south-central plains.  It snowed each day I was there--not much, but enough to cover the ground with white and make my breath come out in puffs of steam.  My sister and I made snow angels.  I got to catch up with my mom, niece, several aunts and uncles, my grandparents, cousins and second-cousins.  On the way home we popped in and saw my paternal grandmother and aunt as well.  They'd moved to a new house since the last time I had visited so it was swell to see their new place.  It was all around a wonderful weekend of family time.  So much of my extended family lives in the state, but it is a darn big state and I don't make it up to the Highline to see them all that often.

Being at my maternal grandmother's house was a completely delightful blast from the past.  I hadn't been there in years, I guess.  My niece and another young relation were playing dress up in the very same clothes I can remember my sisters and I costuming ourselves in as little tykes.  Oh, how we played dress up for hours at grandma's house.  I could still identify the most highly sought after garments.  I had to wonder if they were still the ones most favored by the new generation of little tykes.   There was still the blue and white shag carpeting in the basement.  The grand piano still dominates the living room. The upstairs hallway was lined with the photos of my mom and her siblings that I'd examined in great detail as a youth--noting the big glasses, funky fashions, and hairstyles of the decades when they were younger.  The twin beds in one of the spare bedroom still have the same matching navy blue comforters.   The bright orange rotary phone still hangs outside the laundry room.  We thought that orange phone was the coolest.  I still do.

I should have made a point to visit the root cellar.  I always thought it was cool and creepy as a kid.    It was so dark and smelled of earth, but was loaded with goodies, like Grandma's incredible raspberry jelly.  Maybe next visit.  My grandma's was the only root cellar I'd ever been in until the one at The Museum of the Rockies.

Its amazing to me the details that get imprinted in the mind.  Its equally amazing how much things change and how much they stay the same.
By BLD in MT