I opened one of the food cupboards looking for the rice container.  I poked around in there the whole while thinking I needed to take a moment to tidy up that cupboard at some point.  Jars and tins had obviously been shoved in willy-nilly.  It was crowded and hard to find what I was looking for.  I left the cupboard door open while I poked around in the other food cupboard.  That was my second mistake.  The first was not just tidying up the cupboard right the moment I saw it needed done.

As I rummage around in the second cupboard without warning the jar of Red Mexican Beans slipped off the overcrowded shelf of the first shattering with great dramatics on the counter below.  Glass and beans went every where--and I mean everywhere.  I wasn't so distressed by the mess.  Accidents happen.  But, oh, I was so sad to lose those beans.  Some were salvageable, but most were too mixed up with the shards of glass to be saved.

While all food waste is sad its interesting to me how much those beans mean since we planted them and raised them ourselves.  Its not like we had so many to begin with.  The ones saved from the jar bomb though are wonderfully creamy and tasty.  At least I didn't have to throw all of  them away (with all the shards of glass we didn't think they should be composted).  And lesson learned:  If the cupboard is chaotic take a moment to take care of it...or at least close the door so things don't jump off the shelves. 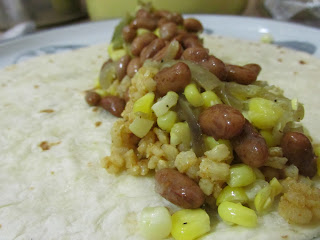