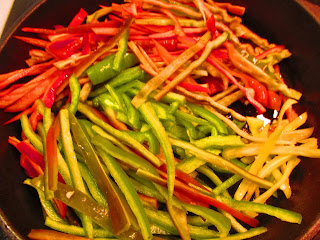 I am a pepper freak.  Spicy peppers, sweet peppers, cooked peppers, raw peppers.  I think they are a marvelous vegetable every which way there is.
So, when we harvested all our peppers ahead of our frosty weather we tried out a new pepper dish--Peperonata--which we served over squares of baked polenta. 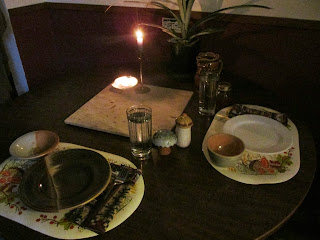 Heat oil in large skillet.
Add peppers and onions.
Saute on medium heat, stirring frequently, for 15 minutes until tender and lightly browned.
Add tomatoes and cook for another 5 minutes or so, until the liquid has evaporated
Salt and pepper to taste. 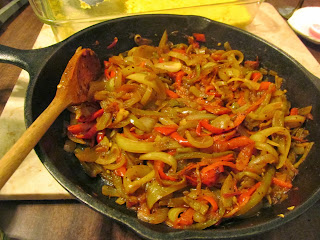 Baked Polenta
Whisk dry polenta meal into boiling water or veg stock.
Use three parts liquid to one part polenta.
Stir constantly for 7 to 10 minutes until it starts to get thick.
Pour into a lightly oiled baking dish and spread out to an even thickness.
Allow to cool so it sets up.  This step could be skipped in a pinch, but I think it makes the baked squares more firm and chewy to let it set up first.
Bake at 350 degrees until it is firm and starting to crisp on the edges, about 30 minutes.

Its an awful lot of peppers in one meal.  I don't always have such an abundance on hand, but boy, when I do I will most certainly be making this dish again.  It may have to become a late summer-early autumn tradition!  A pepper harvest celebration, if you will.  I certainly think a basket full of peppers is cause enough to celebrate!
By BLD in MT