Creature Of Habit - Cookin' in the Dark

It is really amazing how often my brain is running on auto-pilot.  Or, perhaps more accurately, how much a creature of habit I am.  I had this illustrated for me recently involving our kitchen light.

While we were preparing dinner last week the ceiling light suddenly went out in a little shower of sparks.  Naturally, we were both concerned for a variety of reasons, one being that we certainly don't want a house fire.   At first we thought a bulb had exploded, but after removing the cover that was obviously not the problem.  I immediately suggest calling the landlord first thing the next morning.  However, Matt wanted to look into it himself.  We hope to become homeowners within the next year and he figured it was good practice.  I could certainly see his argument, however I also understand that this is one of the perks of being a renter.  When something goes awry you can call in for help rather than do it yourself.   Still, I admire his attitude.  So we didn't call the landlord.  We did call Matt's brother for a consult.  He is good with this sort of thing. 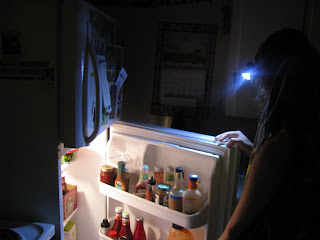 After flipping off the main power Matt started taking things apart and soon discovered the reason for the sparks and the darkness.  The wires feeding into our kitchen light had become severed.  Our house was built in the '30s and so it has a few minor issues related to its age.  Apparently, the wires had done their time and were spent.  It was easy enough to fix.  Pull some of the extra wire down from the ceiling and hook it into a new socket fixture.  (I should say it sounded easy enough because I was actually napping while Matt and Ryan were fixing it.) 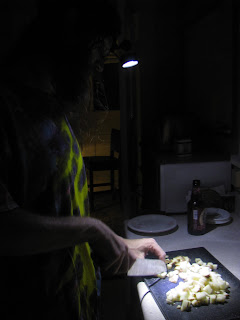 So we didn't have light in the kitchen for a couple days while Matt figured out the problem and then until we had a moment to run to the hardware shop for a part.  This is where I learned what a creature of habit I am.  Every time I passed through the kitchen I would flip the switch which was by now connected to nothing.  Every single time.  Sometimes I would immediately flip it off and other times I wouldn't realize I had even done it until I was halfway across the room.   It made me wonder if I turn on lights even when I don't need to out of some silly habit.   That is something for me to try to be more aware of I suppose. 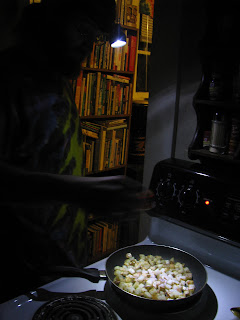 I took this as a time to be thankful.  Thankful that most of the time I have electricity available to me at the flip of switch.  It is a convenience and technology I am grateful to have.  I'd rather not be so absentminded in my usage of it.  Somewhat often I get accused of being a Luddite or something along those lines.  Ah, it isn't true.  I just try to be more selective about the technology I use.  I cannot at this point imagine not having electric lights or a washing machine!
By BLD in MT