Matt's mother taught us the "secret family recipe" for dill pickles, you know the one that came from her mother and is written on the inside cover of her canning book. 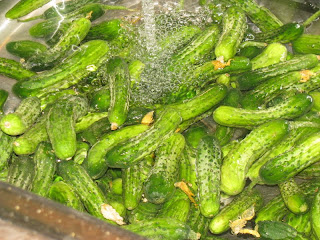 Matt and his brother Adam rave about their mother's pickles.  Adam would keep jars stashed in his room when he shared a house with a group of boys because they were so valued he couldn't risk the roomates eating them all.  Matt doesn't really eat pickles except for his mother's.  Confession:  I'm not sure I've ever eaten a homecanned pickle.  I guess I will soon enough find out what all the fuss is about. 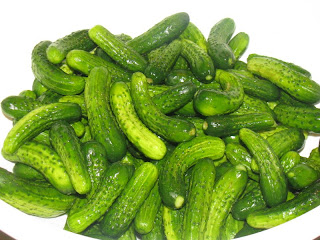 I must say that off all the canning I've been a part of this was far and away the most simple.  We used our own garlic in the process which was pretty satisfying.  The dill and the cukes came from a Hutterite colony at the farmer's market, though I cannot recall which one now.  They were tiny and absolutely perfect for pickling. This homemade pickle amateur is told by those in the know that little thumb sized cucumbers make the absolute best pickles. 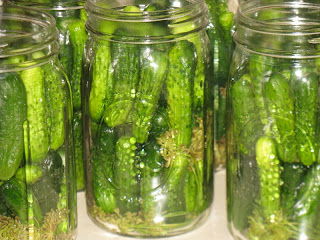 Then as the pickle making lesson was winding down and we were just waiting on boiling jars Sharon made us all a blended ice drink involving lemonade concentrate and frozen cherry juice from the same trees we were hitting up.  (Sharon was the one who originally clued us into the cherry trees.)  The cherry lemonade icee was unbelievably refreshing.  I also thought it was a quite beautiful pink in addition to its incredible tastiness. 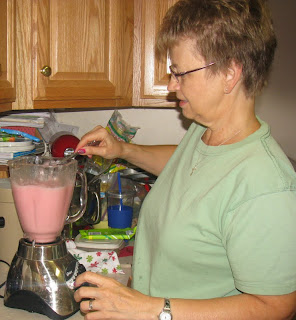 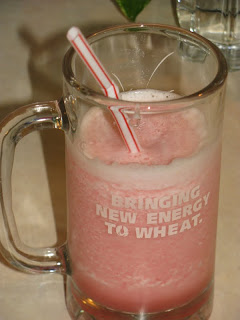 We ended up with 10 quarts of pickles.  We are going to let them set for a while, to steep in their vinegary, garlicky goodness.  I can barely wait to see how they taste.  If all goes well, and I see no reason it shouldn't, we are growing our own cucumbers next year. 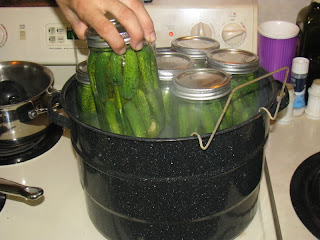