When I was a girl the only vegetable my parents could really convince me to eat was green beans.   After years of green beans as the vegetable with dinner I even grew to dislike them and started to feed them to my cat, Holly, under the table.  I don't know why a cat liked green beans, but she did.  She was a strange cat.  Anyways, I then took a sabbatical from green beans (and really, most vegetables) until I became a vegetarian in college at which point I began a process of training myself to eat all sort of things I never like before, like vegetables and beans.  That is also when I began teaching myself to cook. 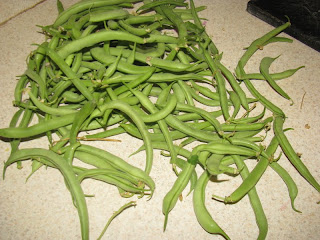 Matt's dad gave us a bag of green things from his garden, as he generously does every year.  A few cucumbers for me since Matt doesn't care for them....actually that is underselling it.  He hates them.  When I peel one he says it stinks up the entire house.  He also always give us a bunch of green beans.  In the beginning I had to train myself to like these too, even though it was the only green thing that I ate as a child.  We always ate soft, canned green beans at my childhood home and these crisp, garden ones were almost too weird for me at first.

Usually we make Rodger's beans into green bean casserole (you know, the one with mushroom sauce and fried onions), but this time I wanted to try something different.  See, I have only discovered my deep, passionate love for roasting everything over the past winter.  I thought, if everything is better roasted, why wouldn't a green bean?!  And they really were fantastic. 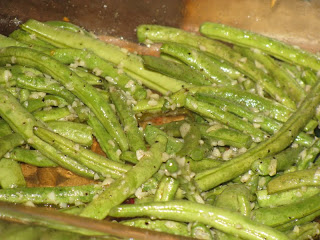 Roasted Green BeansPreheat oven to 400 degrees F.Trim the ends off the green beans.Arrange in a single layer in a baking dish or sheet.Drizzle and coat with olive oil.Season with salt and black pepper.Bake 12-20 minutes depending on how crisp you want them.Add minced garlic five minutes before you take them out of the oven.

We served our tossed with a seasoned rice.  It was a lovely combination because the rice was so soft and the beans so crisp and everything delightfully garlicky.
By BLD in MT