More than a month ago we harvested our mint.  I freeze it for making tea with.  I've dried it in the past, too, but I like the frozen leaves better.  It faster, just as easy, and I think the flavor retention is better.  Mint is probably Matt's favorite tea.  We grow three varieties, but freeze them all mixed together. 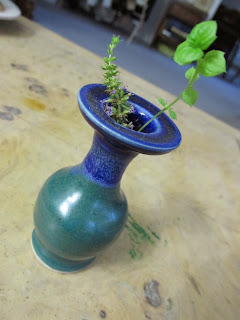 As we were pulling the leaves off the stems and packing them into ice cube trays for freezing I noticed that one of the stems had a flowering head on it with tiny, delicate, purple blooms.  I thought they were quite pretty.  I slipped them into my "dandelion vase" with a bit of water so I could enjoy them for a day.  I was quite certain the tiny flowering head would be dried up by the day's end.

But, oh, I was wrong.  It was quite the opposite, in fact.  Instead of shriveling up the flowering head sprouted a new mint plant.  The growing mint has a long skinny root and is on its fifth set of leaves.  I'm just going to leave it and see what happens--for curiosity's sake.  The tiny little green shoot on the coffee table makes me smile.  We'll see how long it lasts in such a tiny little vase with only water for nutriment. 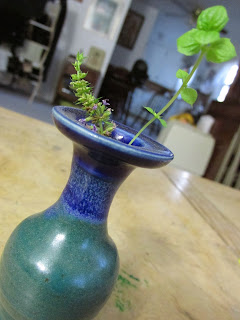 I've always heard that you can't kill mint--that it will spread and take over the garden if you let it.  I guess this is a good demonstration of that resilience.
By BLD in MT