On our third attempt Matt and I were finally able to witness the power and wonder of Lone Star Geyser over the Labor Day weekend.  The previous two attempts had been thwarted by snow as we'd made a go of it too early in the season.  Spring is not the time for Lone Star--unless you've got snowshoes.  Autumn was keen. 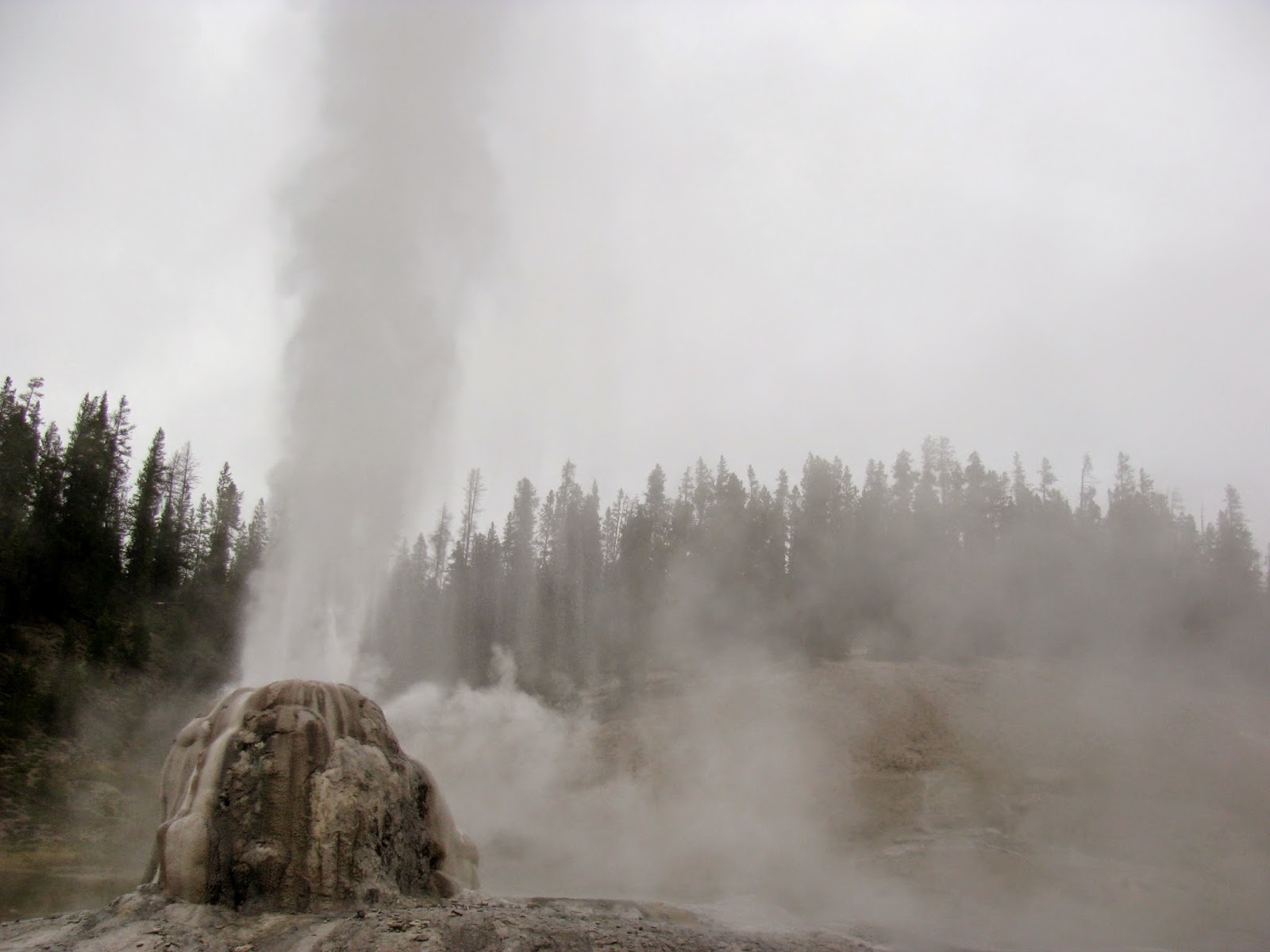 We departed from the trailhead near the Keppler Cascades and hiked in the light rain along the wide, partially paved trail (which also doubles as a bicycle route most of the way to the geyser).  The trail follows the meandering Firehole River--so named because it has so much inflow from geothermally heated waters that is is warm in places.  It was a lovely day for a hike, rain or no rain. 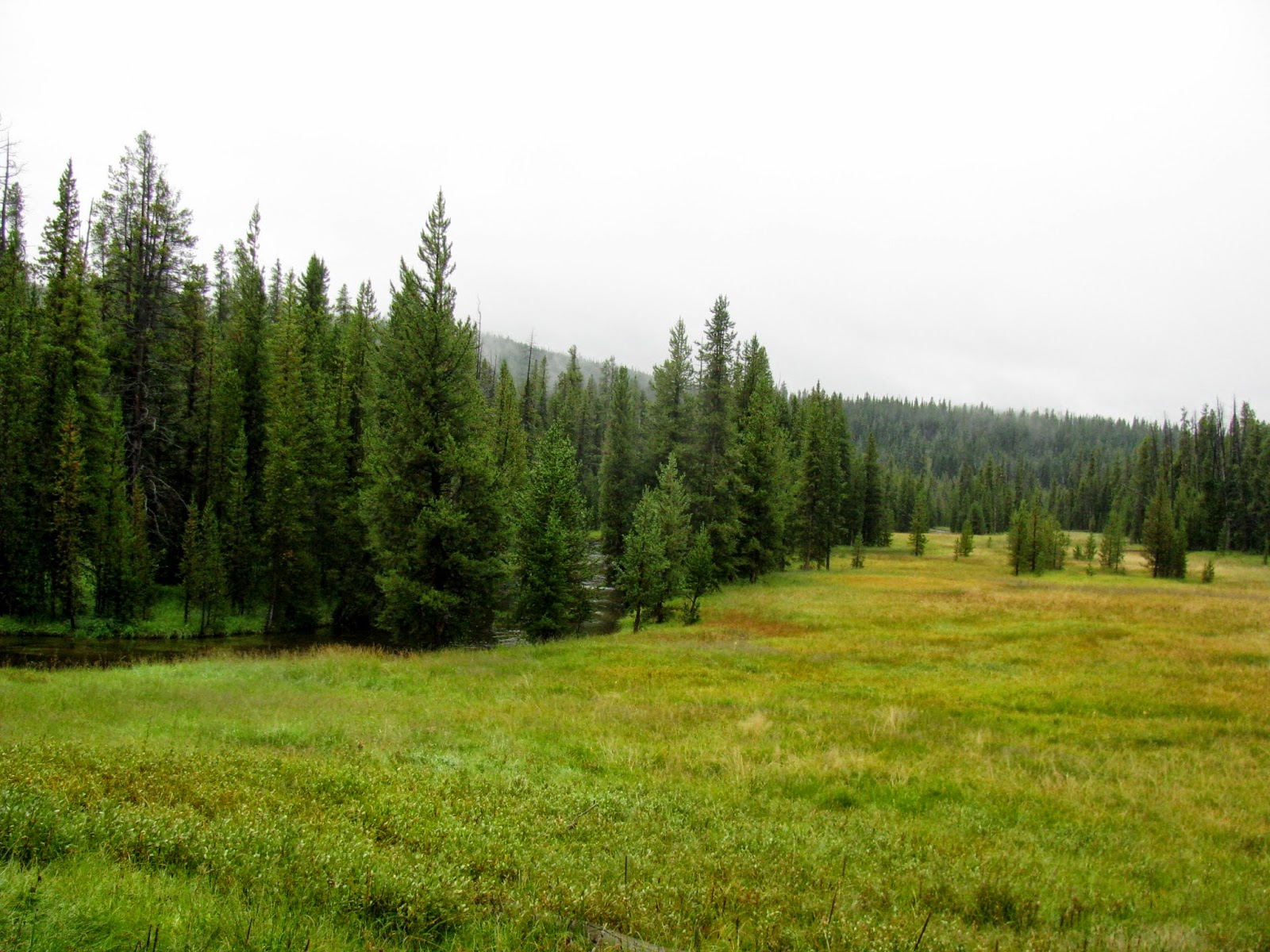 We followed the trail across the river over a little cement bridge and wandered through the forest stopping with great frequency to admire the pretty much insane proliferation of mushrooms.  There were so many mushrooms in endless varieties.  The area had been experiencing a lot of rain and the mushrooms were making very good use of it.  It was insane--there is no other word for it--how many there were.  I mean, in a moist clime like western Washington where my sister lives maybe it wouldn't have been so remarkable, but in all my days in Montana and in Yellowstone I have never seen such explosions in mushroom populations.  Emerging from the forest we came to a lovely meadow, just starting to hint at autumn colors. 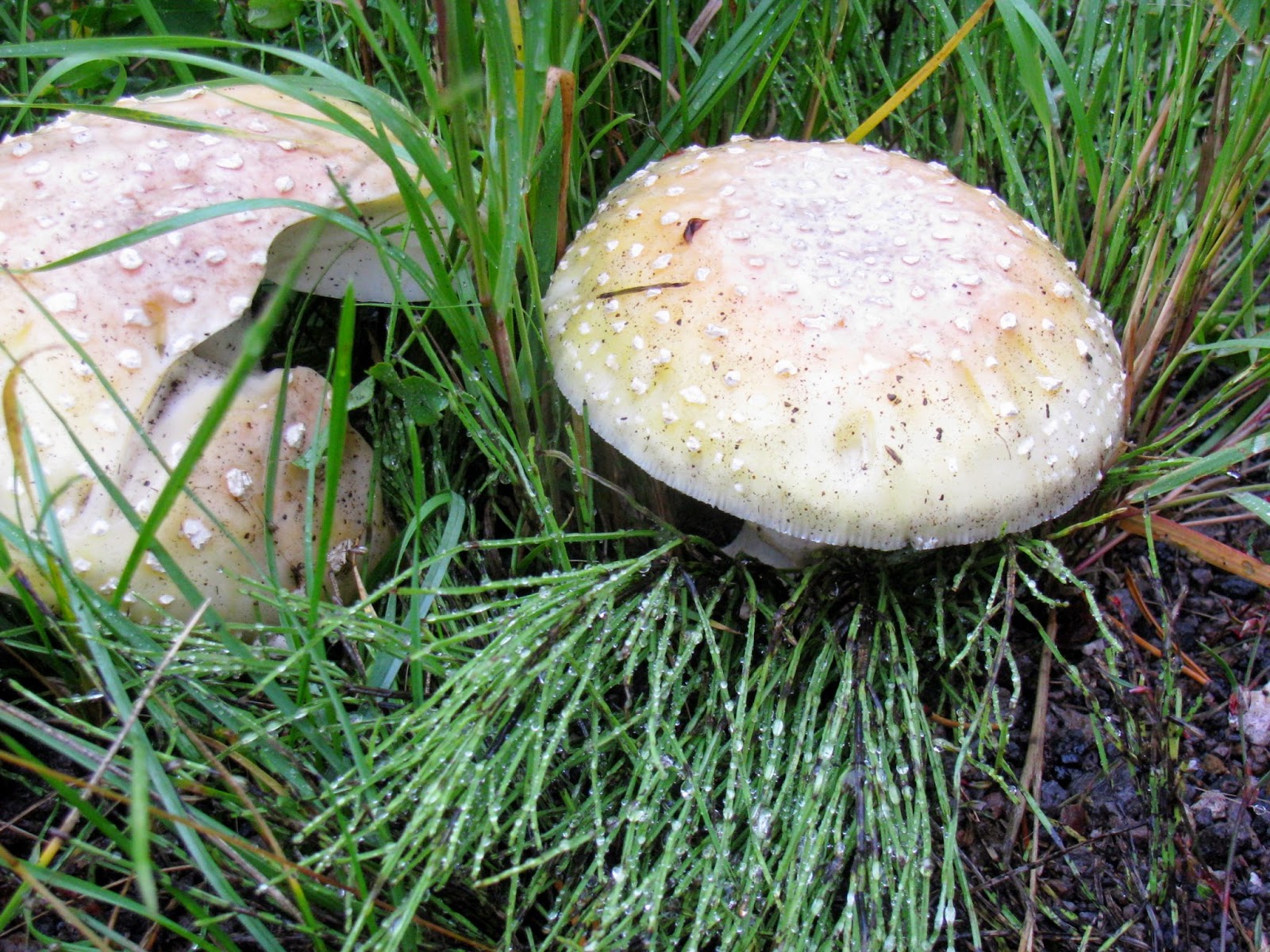 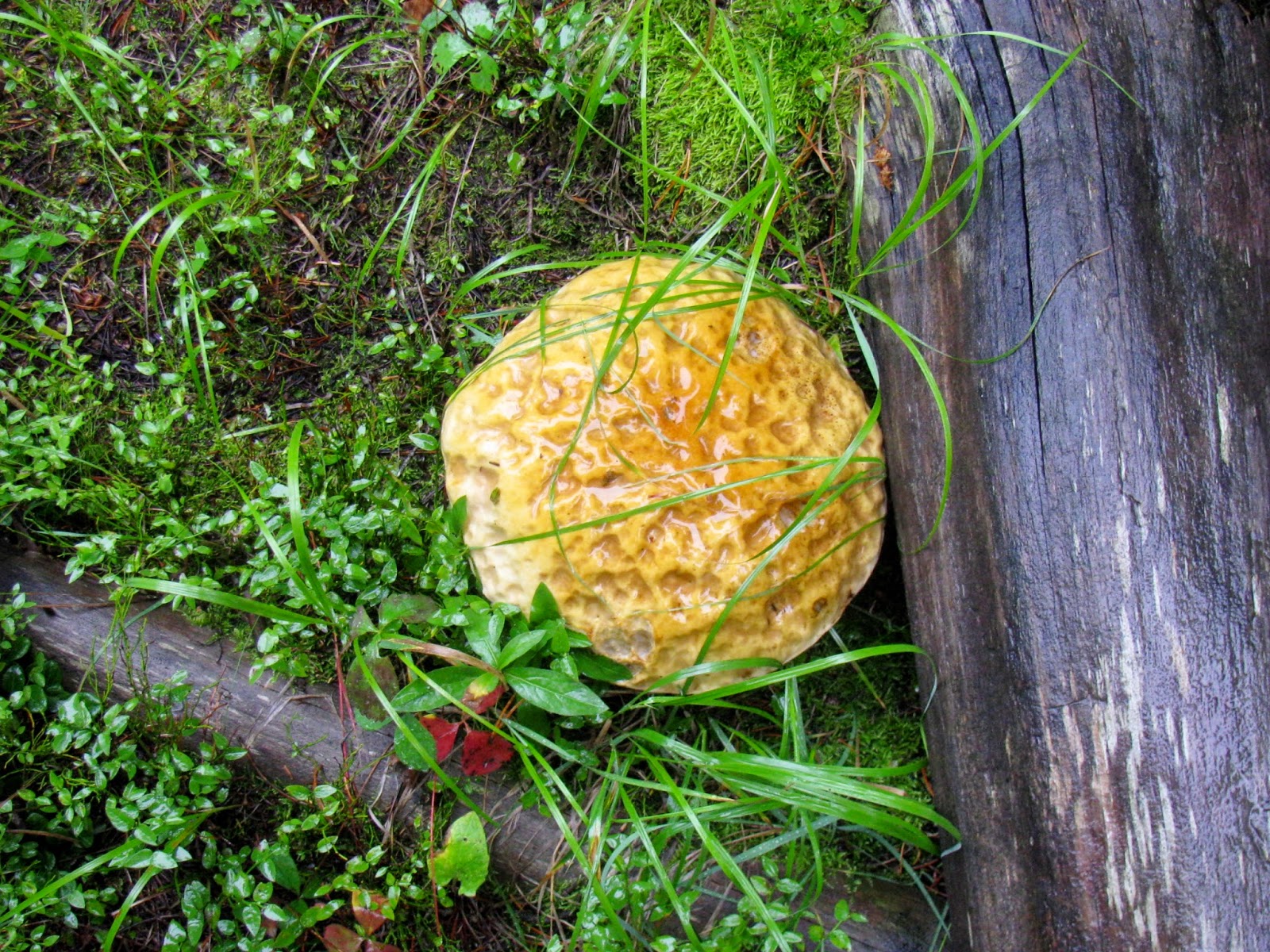 And then we could see the cone of Lone Star Geyser in the distance.  It was magnificent even from a far.  Cinder cones grow so very slowly.  They are like coral in this regard-.  A cone of that size is ancient in a way that boggles my mind.  And it continues to grow with each eruption, of which there are about eight per day.  Lone Star Geyser's cone is more than ten feet tall and centuries and centuries of time brought into physical form.  What a miracle! 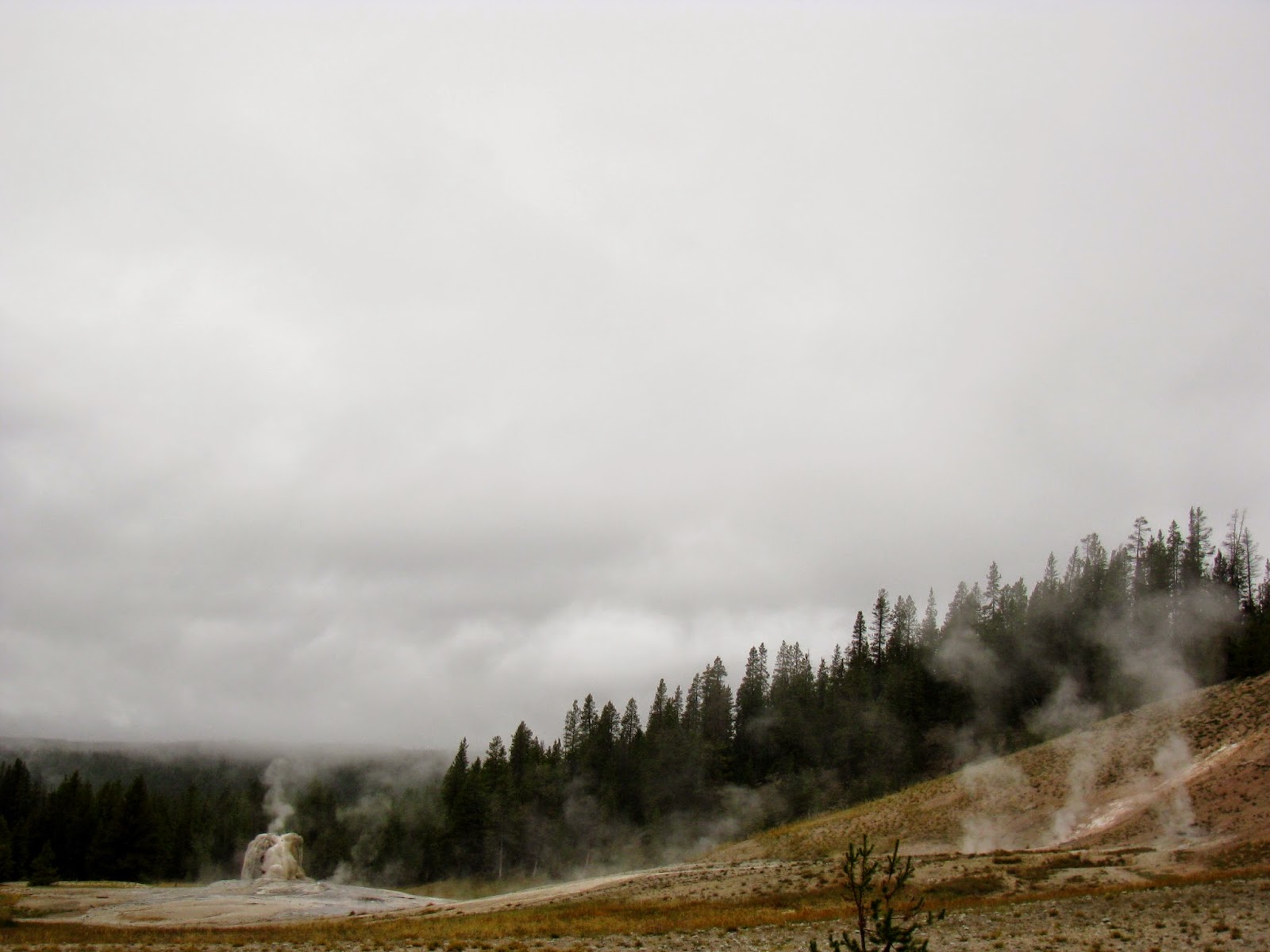 Lone Star erupts at approximately three hour intervals.  Each eruption can last for up to 30 minutes, with much fanfare leading up to and afterwards which means the whole spectacle is quite amazing in length, power, and beauty. 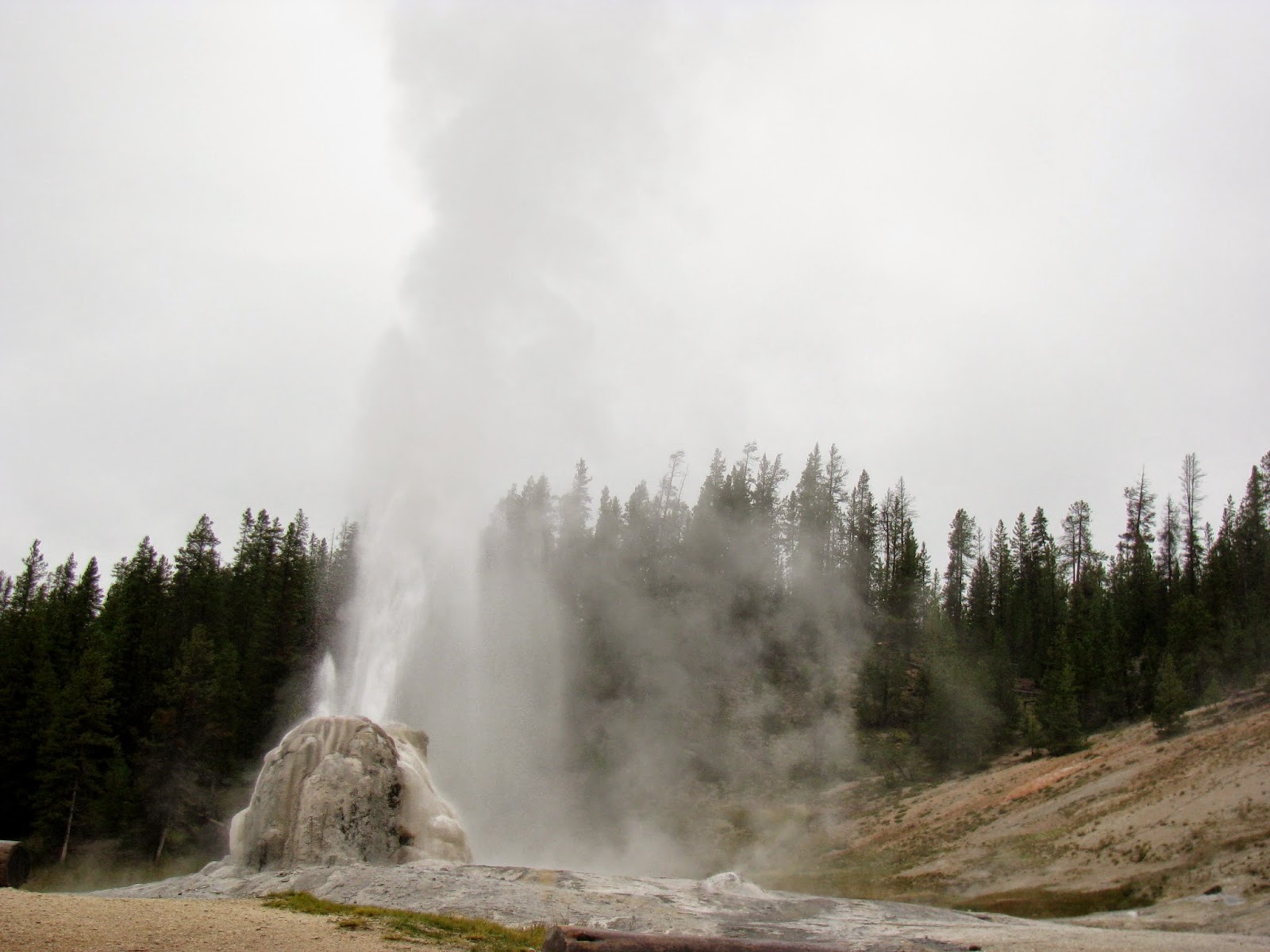 We crossed the open area leading to the geyser--using the little foot bridges over the geyser run-off channels--and took seat under a tree, in an attempt to stay as dry as possible while we waited.  We had peeled just a single satsuma to snack on while we waited when we noticed the geyser was consistently spouting small amounts of water from the vents at the top.  According to our guidebook this meant the real action would soon be upon us.  This spouting increased until the full eruption not fifteen minutes later.  Our timing was amazing. 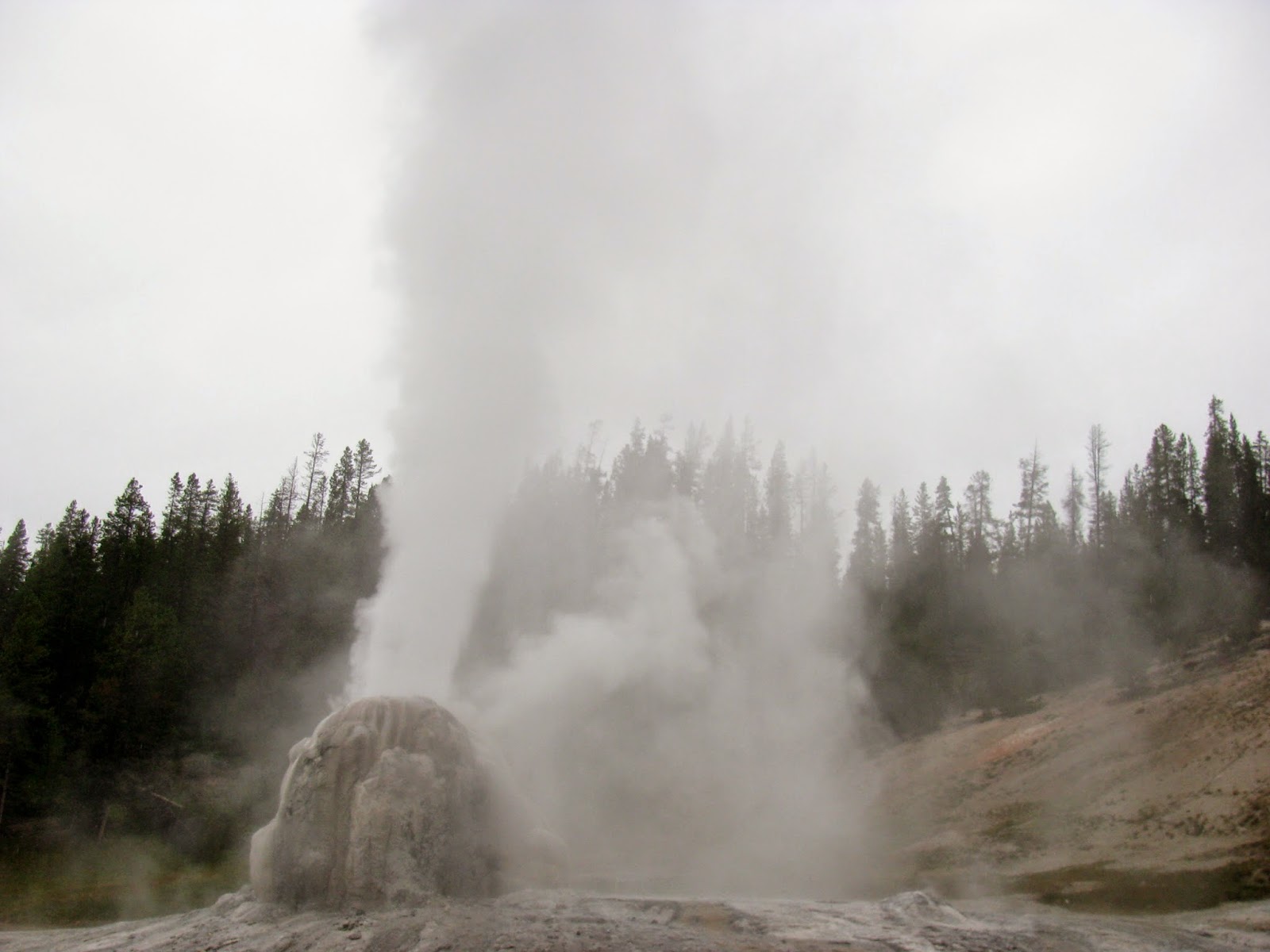 There are no timed predictions, really, for this geyser.  When we visit the Old Faithful basin the Rangers will give you times that certain geysers should erupt, give or take a few minutes.  Lone Star erupts every three hours, on average, but since it is all off on it own--miles away from the nearest geyser--the reports for Lone Star are much less official.  There is a log book at the geyser itself where hikers can report the eruptions they witness.  But, since the book is at the geyser there is an element of chance in hiking to see it.  We were fully prepared to wait three hours if it was required. 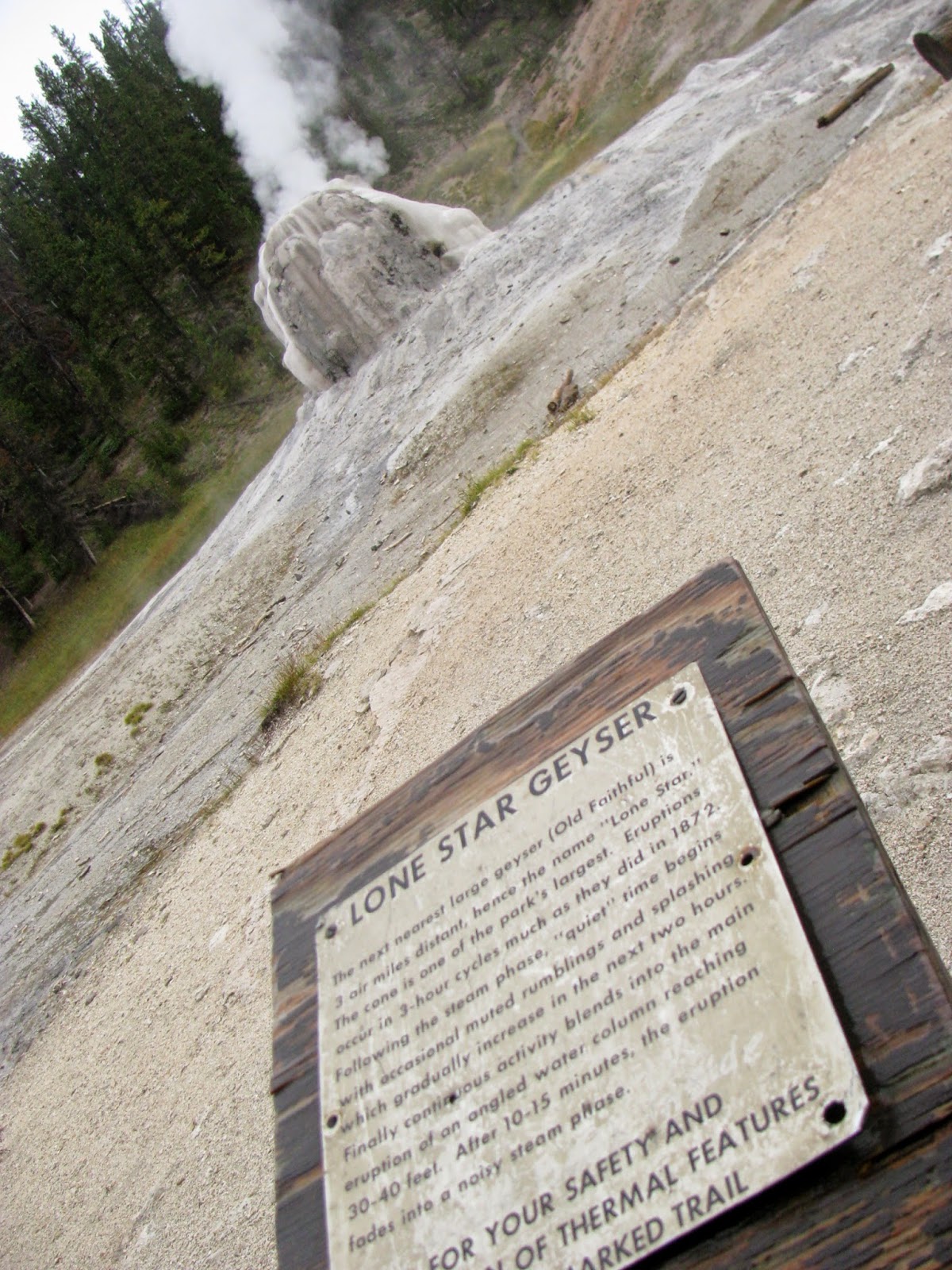 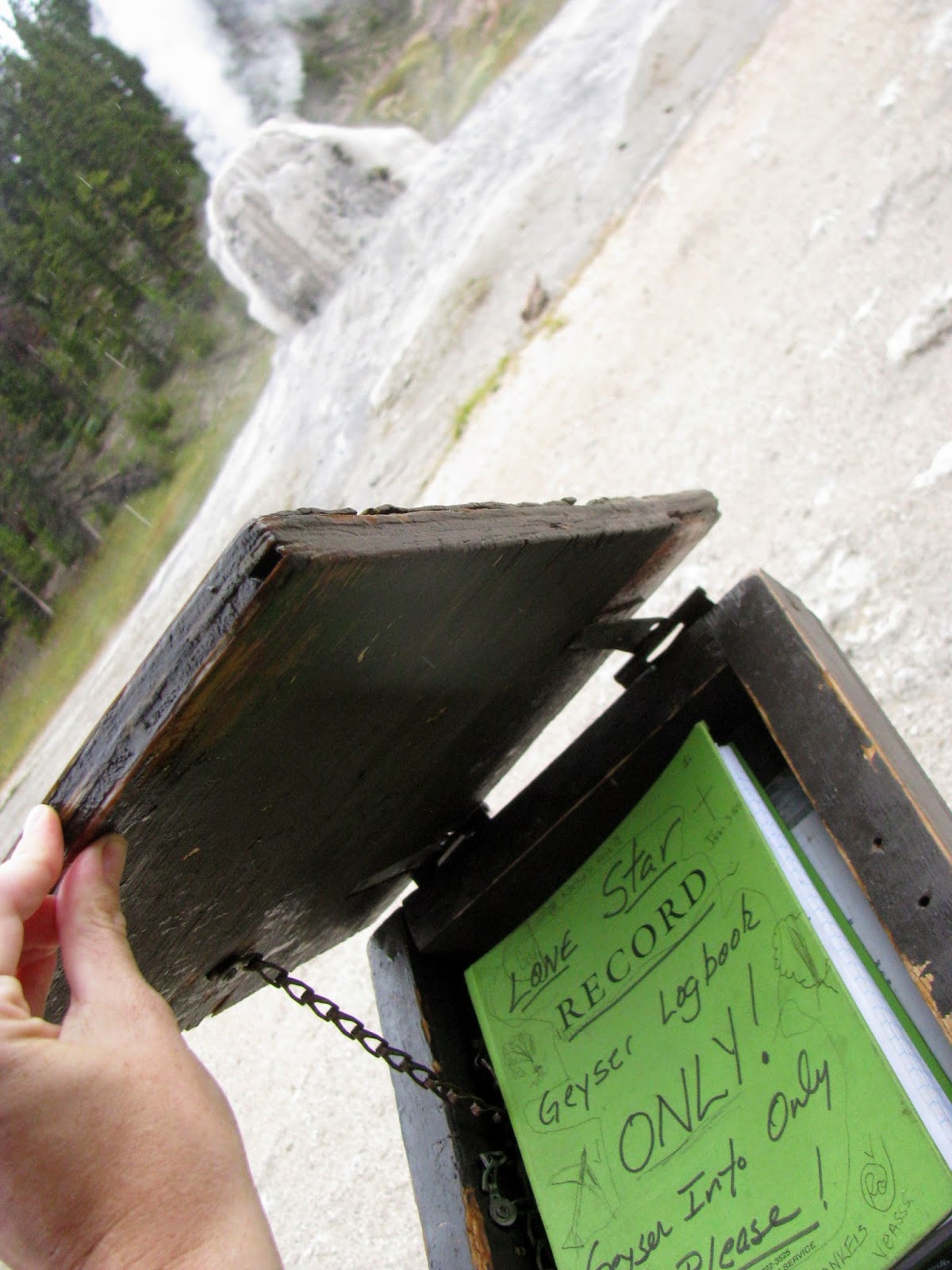 But, as fortune would have it, we didn't have to wait hardly at all. 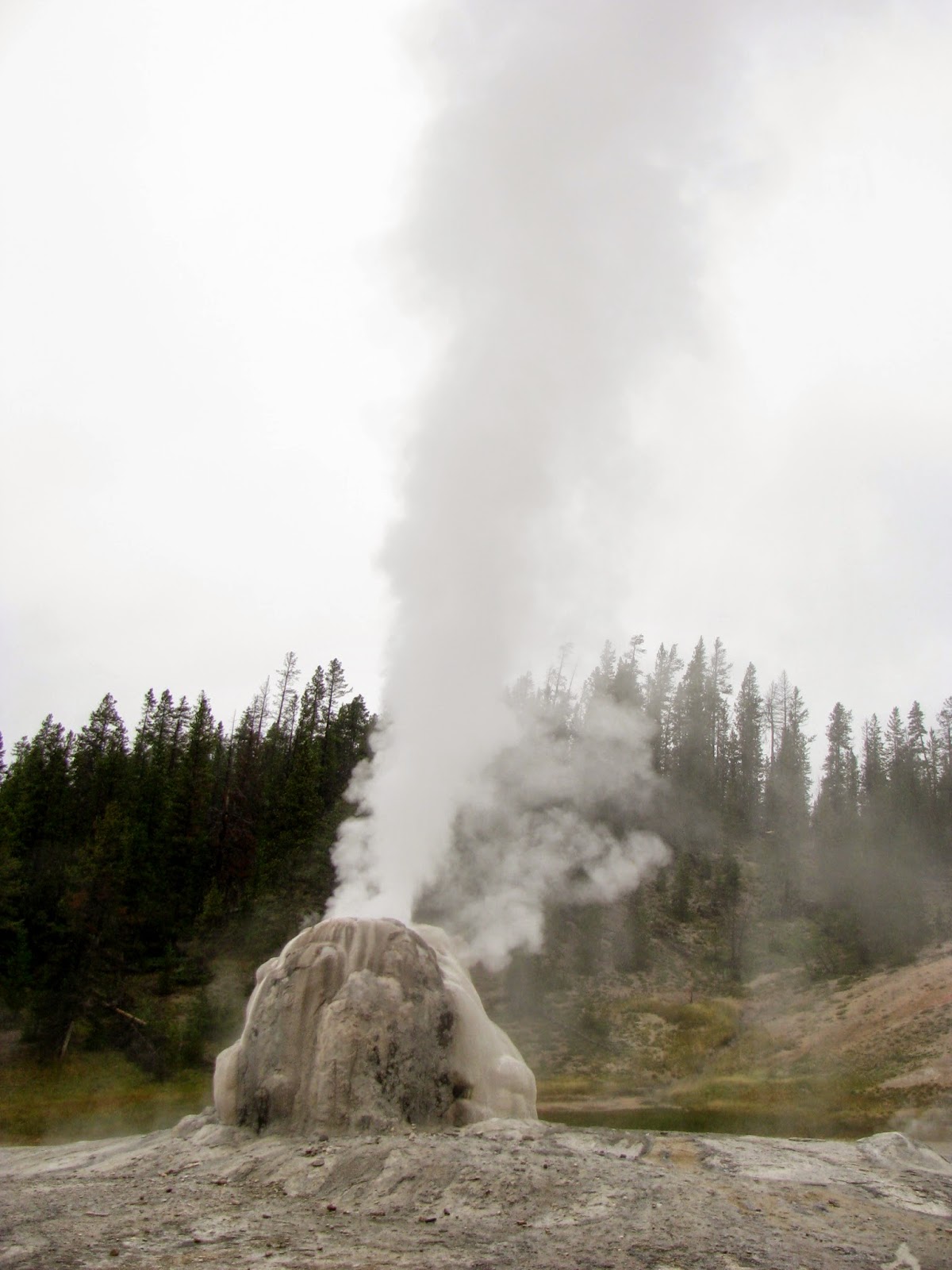 Once the eruption really got going it was truly breath taking.  The water shot out with such force that I could only make the mental comparison to that of a rocket.  The water and steam makes a column that shot right up into the air what I estimate to be 40 feet or so.  Blast off! 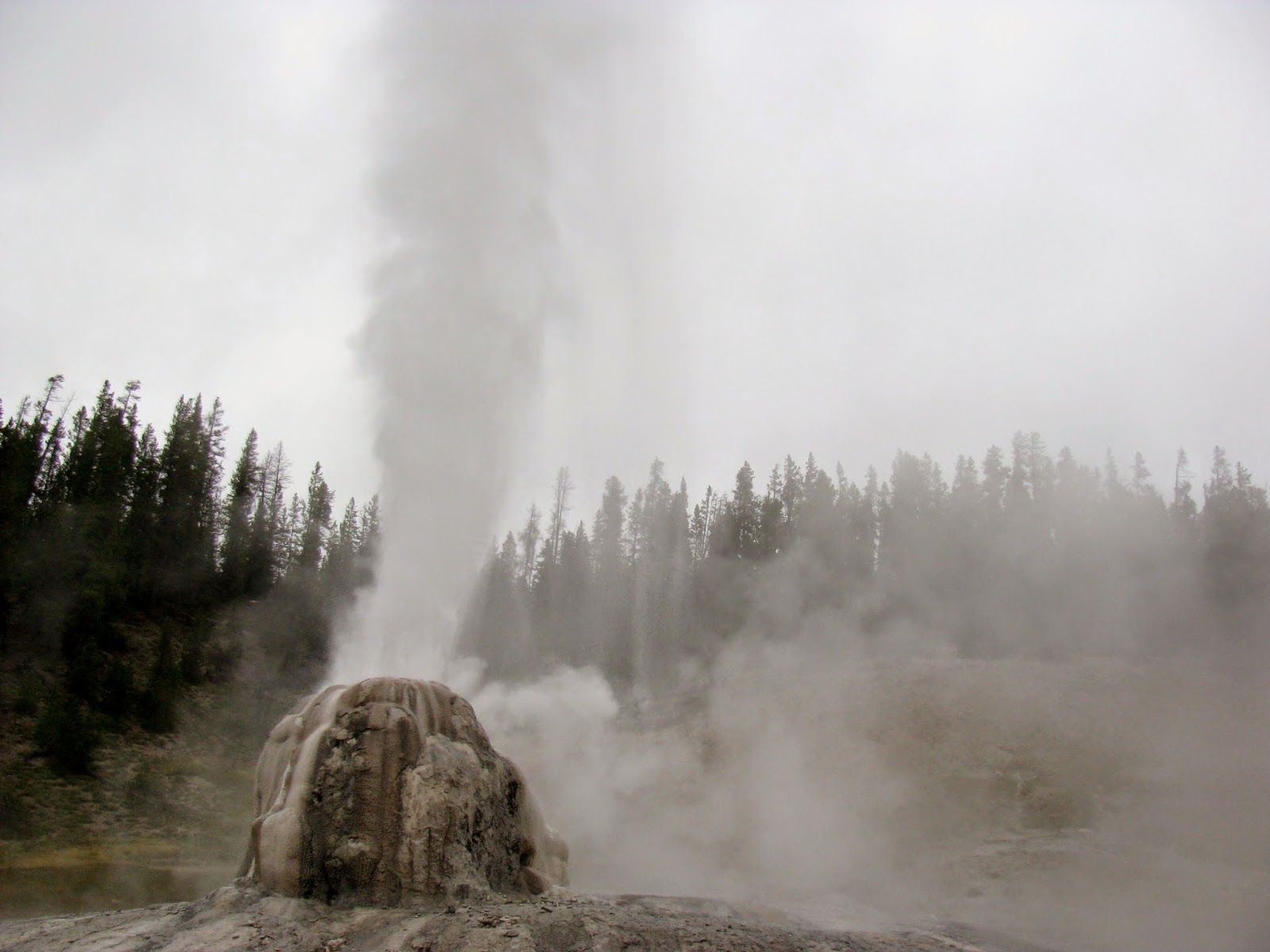 And we were the only ones there to see it, aside from the birds and squirrels, that is.  Though it is a very flat, easy, hike--and only five miles round trip--that is apparently enough to keep the crowds to a minimum.  This fact makes it a nearly converse experience to that of watching Old Faithful.  Both are very much worth beholding, but I must admit there was something tremendously special about our solitude while watching the glory of this backcountry geyser. 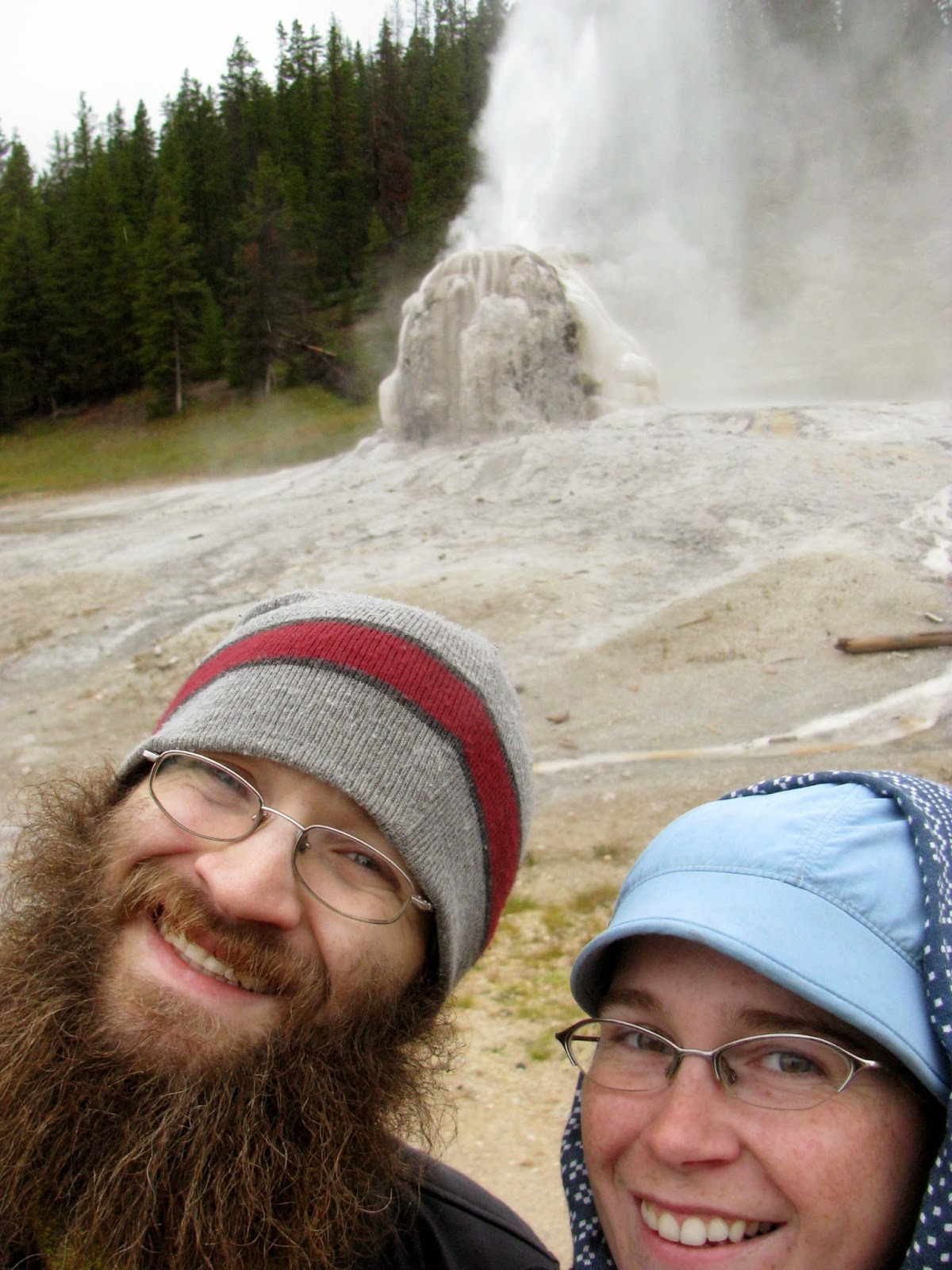 I ran about--literally ran about--trying to admire it from every direction that I could.  There was time with such a long eruption, after all, and I wanted to know that geyser.  A mist of geothermal water fell upon us, mixed with the cool, mountain rain.  Even after the spray of water diminished the geyser continued a steady roar for another 15-20 minutes.  Oh what a joyful noise.  That roar, that raw power of nature.  I couldn't stop remarking about it.  "That roar!"  We were positively gleeful.  It was just as grand and magnificent as I had dreamed.
We retraced our steps back to the trailhead, passing a couple other hiking parties who each asked us if we'd seen the eruption.  We were all to happy to tell them about it.  We didn't even care about the continuing rain.  We were on top of the world. 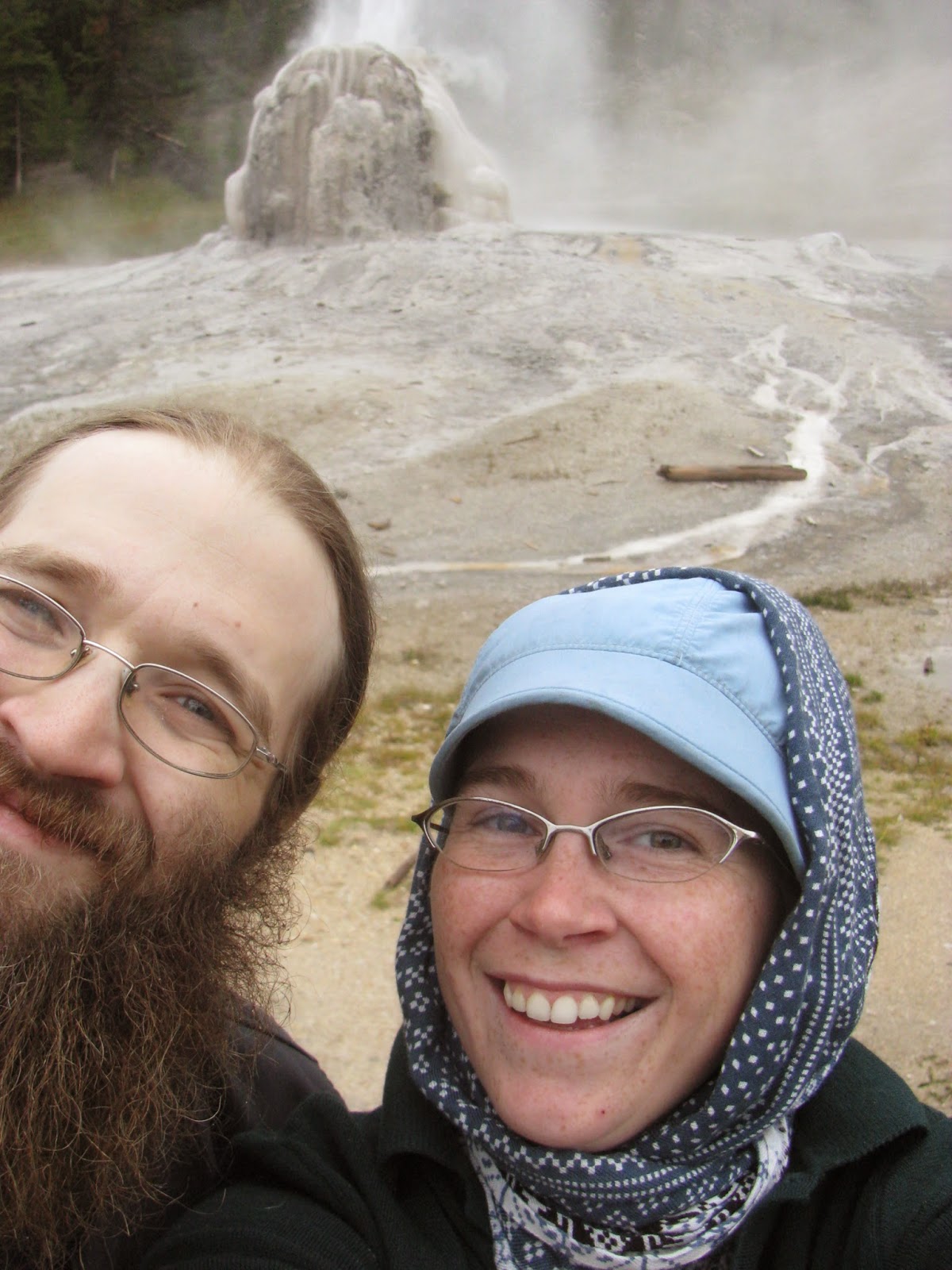 And the old adage is correct.  "If at first you don't succeed.  Try, try again."
By BLD in MT