While I was "watching" the Super Bowl I made great progress on a hat I'd been working on.  I actually made it twice.  I took it apart just a few rows from the end the first time.  It looked dreadful and the number of stitches on my needles didn't match what the pattern was saying.  So, chocking it up as practice I just unraveled it and started over.  I must say, I love this aspect of knitting.  Its so forgiving. Just unravel and its like it never happened.  It takes a lot of pressure off me as a newbie. 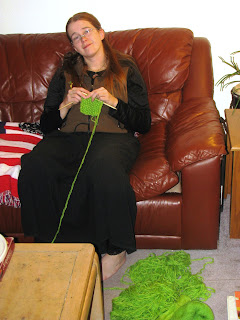 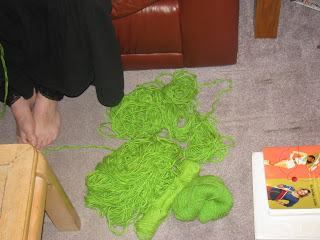 So, funny story, I decided to try and knit this hat after seeing this post from Jamie at the Ngo Family Farm.  Her little girl looked so charming and cozy in that bonnet it made me swoon and wish that I had a bonnet of my own.  Which caused me to pause...could I get away with wearing a bonnet?  Could I make a bonnet and see?  Were there patterns for adult bonnets or just sweet little babes like Jamie's?

Turns out the answer to all three is yes.

I found a pattern for what was being called a "prairie hat," over at Ravelry which seemed like it would suit the bill for my knit bonnet experiment.  Even the second time around I still managed to get lost in the pattern and thus had to wing it a little as I went.   I made it in lime green because that was the yarn I had on hand.  Its actually two strands of green used together as I didn't have any yarn heavier than worsted weight.   It makes it a rather....bright...bonnet, but still.  At the Super Bowl party I made one of the other guests laugh.  He asked what I was making.  I said a sort of bonnet.  He said "Like the Amish?"  And I said, not exactly, but sort of.  He then laughed and said, "In lime green?!"  I do have a second one cast on in some black that I got at the thrift store already though. 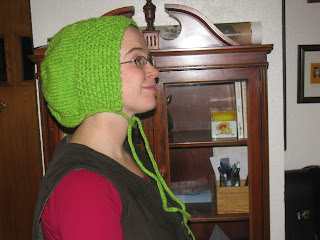 Its quite warm because it cups my face so well, tucking in my ears completely.  I can pull it forward on my head and have brim to shade my eyes as well, but its not as warm that way.  And while I am not nearly so cute in mine as that sweet little girl, I do quite like it. 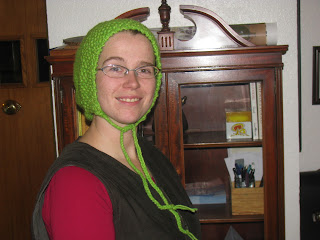 This is the first hat I've ever knit.  I got a lot of good practice out of it, too.  I learned a new stitch and finally grasped the point of doing both k2tog and ssk which I sort of though did the same thing and couldn't understand why I'd need to know both.  I'm all around pretty pleased about it. 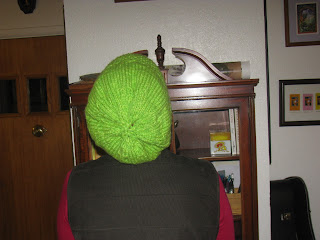 I have knitting fever....its all I want to do.  Now that I've branched out from the wash cloths I am keen to see what else I can do!   Perhaps a bonnet with a button strap under the chin instead of ties.  There were actually a surprising number of bonnet patterns on Ravelry.  Who knew?!  Its not just me that wants one!
By BLD in MT