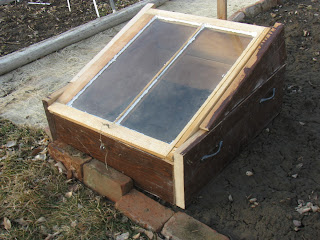 Matt built his first cold frame a couple weeks ago.  It turned out quite well and has proven to be an interesting little science project already. 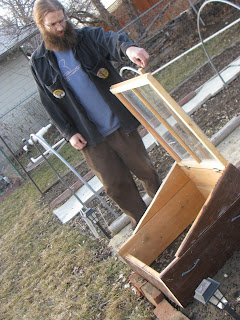 He's been taking temperature readings at various points in the day on thermometers both inside the frame and nearby outside of it.  He has thermometers that record the highs and lows for a 24 hour period.  Its been quite pleasing.  Even with outside temperatures of 30 degrees F  to 50 degrees F the temperature inside the cold frame thermometer showed a inside range from 30 degrees to 78 degrees.  Certainly warm enough for leafy greens!  Matt is glad that is retains heat so well because he can see a couple flaws in his design--things he'll do differently next time--but flaws or not it seems to work.  Superb. 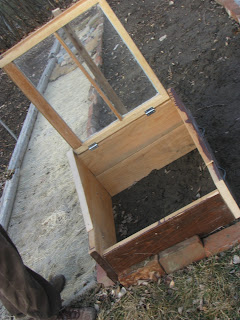 Matt would basically just love to garden year round, not to mention eat fresh veg all year.   While our growing season is long enough by Montana standards, it is apparently not long enough for Matt's.  Fine by me.  I like garden fresh greens.  I bet I'd really like garden fresh greens in December.  Plus he thinks we'll be able to start other seedlings earlier using it as a little greenhouse for our flats of sprouts. 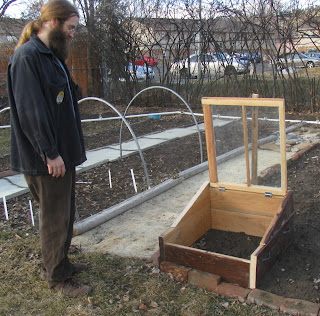 In addition to its function I was impressed in that Matt also managed to construct the thing using all material that we either had laying about or from the local Habitat for Humanity ReStore.  I've said it before and I will say it again:  that place is amazing.  They had hinges for $ .50 and that were made in America.  They also had handles, which Matt mounted on the sides of the frame for easy portability, for $ .50 each.  The lumber was some that had been left behind when the previous owner of our house moved out.  The caulk was some we had from some other project.  The window we found sticking up out of a dumpster last year (or maybe even the year before that).  There were several more, too, which we still have in store in the shed so I foresee more cold frames in our garden in the future. 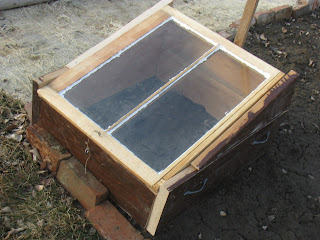