This may come as a shock to a lot of people, but I watch football--not every Sunday, but with regularity.  I should note straight away though that by "watch football" I mean that I knit or draw in the same room as my male companions (and the occasional female one) while they actually watch football.  I just like spending time with my friends and Matt's brother, Ryan and they all seem to like football a great deal.  So, "watching" football is a great opportunity to hang with them.  There is always much conversation and laughing, good beer and food and people that are dear to me.  So, football on the TV or not, that's a great gathering by me.

So, now two weeks past was the Super Bowl.  (I didn't realize this until I said I had no plans for that weekend and Matt reminded me that our friend Jeremy was having a party.  "Oh, right.  Its Super Bowl weekend.  I totally forgot.")  So, in honor of our party host, an intensely passionate 49ers fan, Matt shaped a batch of soft pretzels into 4s and 9s.  It was pretty funny and the pretzels were demolished rather quickly by the party guests.   One guest gave the inadvertent compliment that he had never known anyone who made homemade pretzels.  We also made some nacho cheese dipping sauce...because soft pretzels and warm cheese really seem to go together--especially at sporting events. 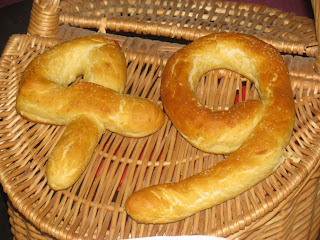 I like the festive atmosphere of Super Bowl parties--well, parties in general with the Super Bowl being no exception.  I like the cheer in the air and the massive spread of tasty treats that everyone has contributed.  The decorations and enthusiasm.  The gathering of a large mass of friends.   And the actual football is okay, too. I am frequently impressed by the players' athleticism--running, kicking, and throwing farther than seems possible, hurdling other players with a single leap.  I don't like the commercials.  I hear that is supposed to be one of the best parts of the Super Bowl, but, eh, I guess its lost on me. 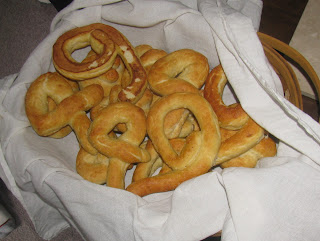 But, themed pretzels or not the 49ers still lost.  I still had fun though and got almost a whole cap knitted, too.
By BLD in MT