We were going to make a pie.  I can't remember why now...not that you need a reason to make a pie...pie is reason in and of itself.  But, we were going to make a pie and realized that we only had enough shortening for one crust.  Of course, we didn't realize this until we mixed together all the dry ingredients for two crusts.  So what to do?  What to do?  In the end we just divided the dry ingredients in half and used up the shortening we had and made a single crust apple pie.  The other half of the dry ingredients went into a jar and into the fridge.  Where it sat for several weeks until I pointed it out to Matt again and suggested we think of something to do with it...another pie perhaps.  So when I came home from work Matt had made a pot pie-ish.  I say "ish" because it only had a top crust.  All the pot pies I've ever had were two crust, enclosed affairs. 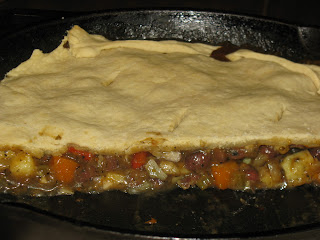 It was vegetables (squash, onions, carrots, potatoes, peppers, and corn from the garden) and pinto beans in a thick brown sauce of seasoned vegetable stock.  Matt cooked up the stew part on the stove top in one of our cast iron pans and then put the crust on top and moved the whole shebang into the oven until the crust was done. 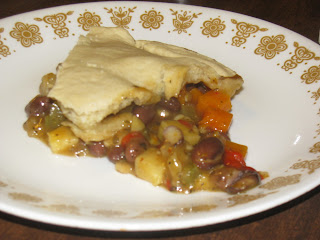 Cast iron pans rule.  So did the pot pie-ish.
By BLD in MT