Matt and I both are lifelong fans of biscuits and country gravy for breakfast...and occasionally for dinner, for that matter.  When we became vegetarians we certainly didn't want to give up such a delicious, filling, and comforting meal.  We used to buy this vegetable sausage called Gimme Lean to make it with, but we don't like the expense (when beans are so cheap) and we tend to lean away from products with such long ingredients list (though I will mention that at least Gimme Lean doesn't contain GMOs).  So now we just make up a veggie packed version with whatever veg we have on hand at the house, which varies by season, and whatever kind of bean we have cooked up for the week. 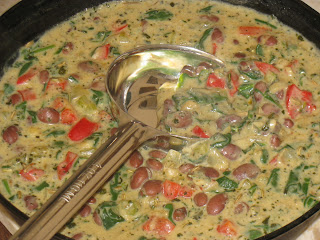 Saute any vegetables that you will be using until they are cooked and tender to your liking.  We most frequently use greens, peppers, onions, peas, and celery.  We've also tried all sorts of other veg though--corn, cauliflower, eggplant, carrots, etc.  Whatever ya got.   I don't really know how much veg to tell you to use as it can be really variable depending on the type of vegetables and how much veg you've got on hand to throw in.  Several cups.  Once tender, set them aside for a moment.

When Matt was first teaching me to cook this was a good tandem meal to prepare.  I had to mix, measure, and bake the biscuits while he made the gravy.  Thus, baking powder biscuits were one of my first forays into cooking from scratch.  As evidenced by the title of this recipe, I still let Matt make the gravy.  He's just so good at it. 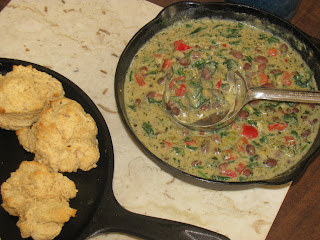