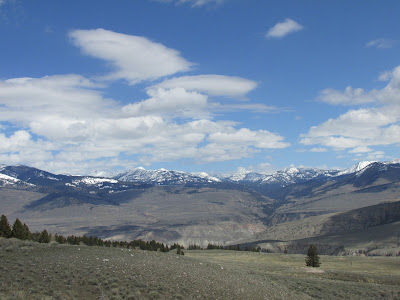 On Sunday we took a 5.1 mile hike on a well maintained trail called Beaver Ponds Trail at Mammoth in Yellowstone National Park.  It was gorgeous and sunny and we found ourselves taking off our coats and then putting them back on again and then off again and on again.  It is the mountains in May after all.  But, Saturday had been cool and even snowed a bit so the sun and jacket dance was welcomed.  They sky was blue and the mountain panoramas spectacular and vast.   The Beaver Ponds Trail is quite flat and comfortable walking...once you get past that first 7/10th of a mile which was pretty much up, up, up. 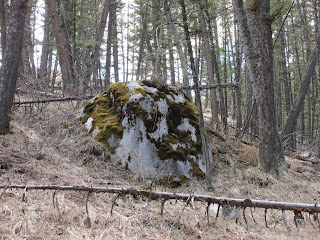 We saw lots of scat and many animals, including a new-to-us bird species--the Williamson's Sapsucker.  He was a stunning black and white backed woodpecker-like creature with a striking and hard to miss yellow belly.  His female was a little less spectacular to behold.  Both sounded amazing when they drummed on the trees opening up holes for sap to flow from.  It was such a rapid and powerful drumming that reverberated well in the forest. 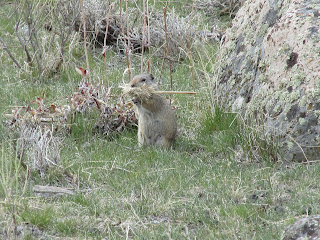 We stopped near one of the ponds to sit on a rock that we believe must be used as a scratching post for bison with itchy winter fur.  The rock was surrounded by large clumps of bison hair.  It was amazing to look at up close.  There are different layers within the fur--soft, fuzzy and downy near the body and long and shaggy on the outside.  I could see how it would keep a bison nice and warm.  Actually, I learned this weekend that bison are covered in snow in the winter which is a testament to how well their fur insulates them.  They are retaining heat inward which means the snow doesn't melt as much.  I always thought they looked so cold in those winter photos (if you don't know what I mean look here), but that is, in a way, actually evidence of the opposite. 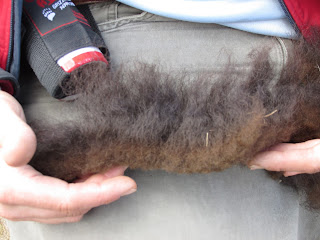 There weren't many wildflower out yet, but a few.  I am still terrible at identifying them--a goal for this summer. 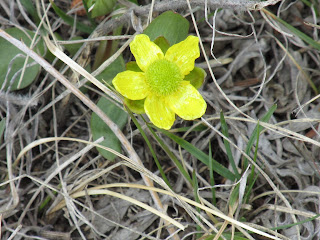 We saw three spring-frisky coots in one of the beaver ponds.  They were freaking out in a just hilarious fashion--running across the surface of the water with loud flapping footsteps for dozens and dozens of yards, back and forth, back and forth.  Matt and I couldn't help but laugh.  I am sure it was dead serious to the coots though.  There were three of them and breeding was the matter of the day.
We passed a herd of about twenty or thirty cow elk a ways up the hillside from us.  Perhaps there was a bull around as well, but I never saw him.  We saw a few distant bison, too.  The trail was very well marked with the tracks and scat of both animals.  Its sort of amusing to think of using the same trails to pass through the trees as these massive creatures sometimes do. 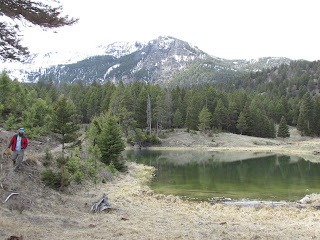 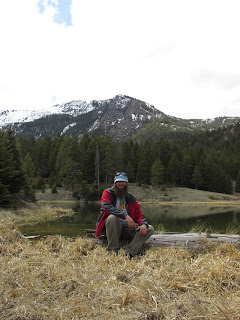 We saw our first beaver dams which were pretty neat.  I find it interesting that beavers can so actively change the landscape to suit their needs and purposes.  We didn't see any beavers, but I wasn't really expecting to.  I think they are more busy at night.  We did learn the French word for beaver though from a Frenchman who watched Riverside Geyser erupt with us.  Its "castor."  He described it to us as "the animal that blocks up the rivers."  See, Yellowstone is amazing--geysers, wildlife, mountains, and cross-cultural exposure!
Near the homestretch of the trail Matt abruptly stopped me in the trail with a silent upraised hand and there just fifteen feet or so away was a lovely pair of grouse.  One decided we were spooky and walked off immediately.  The other, since we had frozen in our tracks, must have decided not to concern herself too much about us and proceeded to scratch and peck at the ground.  She slowly wandered away and we slowly followed after her--being sure to keep a good distance so that we could see her, but so that we didn't affect her behavior.  She paid us no mind whatsoever as she weaved through the shrubs and sage and tall grass of the hillside foraging. 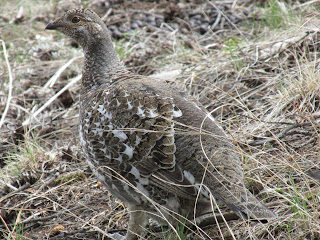 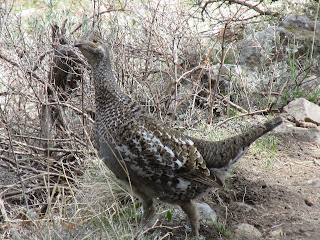 I am not the best at identifying three types of birds--sparrows, hawks, and grouse.  They all look very, very similar to each other.  The differences are subtle and its frequently hard for me to be sure of my IDs. So, with that said, I think she is a Dusky Grouse.  She has a rather dark belly with a squarish tail and some stunning feather patterns.  She was beautiful and we had a wonderful time following her through the forest until she wandered too far up slope and disappeared into the foliage with her spectacular camouflage. 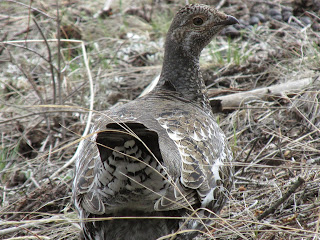 The hike was a wonderful afternoon journey through a nice variety of terrain from open sagebrush meadows to dense evergreen forest to lush green ponds, offering breathtaking views or mountains and meadows as far as the eye can see, and as you near the end of the hike in the distance you see the terraces at Mammoth, too, and know civilization is just ahead once more. 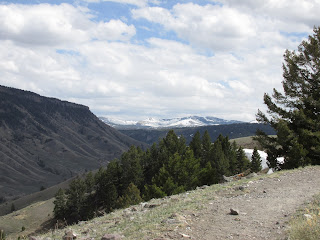 It was a grand, grand hike.  I bet we do it again sometime.  But, for now we are once again paging through the guidebooks (most notably A Ranger's Guide to Yellowstone Day Hikes) trying to find our next new adventure.
By BLD in MT