Observation Point and Solitary Geyser can be accessed from the boardwalks in the Upper Geyser Basin at Old Faithful.  A short and sort of steep dirt and rock trail spurs off from the boardwalks and leads up the mountainside to a great place to observe the whole glorious geyser basin as well as to one geyser that is all off on its lonesome--the aptly named Solitary Geyser.  There are cool little stair stone slab steps up to the Observation Point and the whole thing is only a shade less than two miles.   For me, two miles is nothing.  That's less than walking home from work, but sometimes a nice short hike is just what suits the bill, especially if the day before was dedicated to more rigorous hiking. 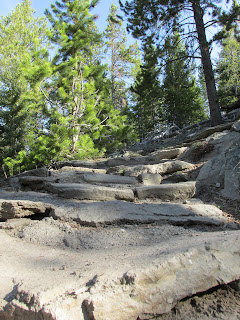 We hadn't made it very far up the trail when we were stopped by a flash of red and black in the trees.  Soon enough we spotted our very first Red-naped Sapsucker.  They are a very, very striking bird.  It was also our second new woodpecker species ID'd in as many weeks.   Matt favors woodpeckers so he was extra excited.  We watched them from the trail until the disappeared into the trees before continuing on.  Birds always distract us while hiking.  Matt says he doubles the time the guidebooks say a hike should take because we're so easily distracted. 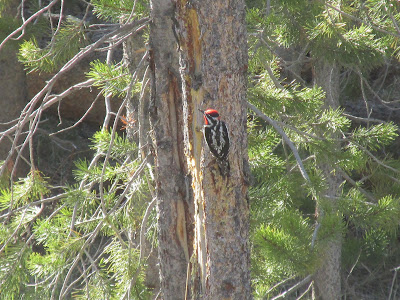 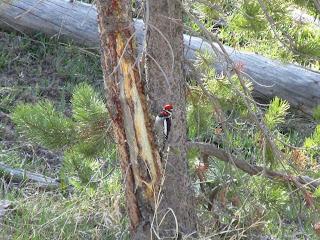 Though we've seen Old Faithful erupt a half dozen times or more we decided to wait up at the Oberservation Point and watch it again from a new vantage.  We had a little time to wait and so we scoped out the geyser basin below and the surrounding forest and chatted with a few other visitors who came up to watch the eruption as well.  Including one who was very, very obviously drunk.  At 10am.  And getting drunker all the time as he swilled off his travel mug which smelled strongly of booze.  But, whatever.  We met some really nice young American boys as well as a very friendly French family.

While we waited a couple red squirrels were chattering and chasing each other in what I found to be a highly entertaining fashion.  I always wonder if the chasing is amorous or rivalry.  I can never tell. 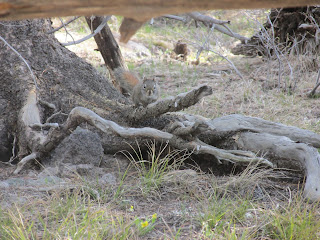 An osprey flew by and since we were at such an elevated point on the mountainside the beauty was almost at eye level with us as it passed.  She then circled overhead, quite closely, for several minutes before taking off to find a place to eat the fish that was clutched tightly in her claws.  We've seen a lot of osprey, but never quite that close up. 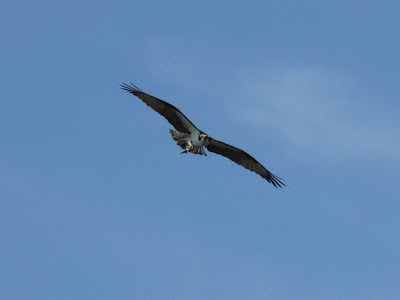 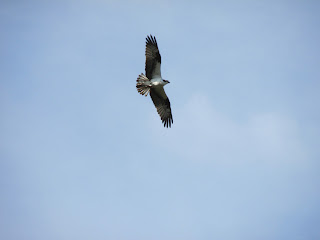 As we continued to wait the Lion Group Geysers started to erupt down in the basin.  We'd never see this particular geyser erupt before so that was a very nice bonus.  The Lion Group consists of four geysers that are all connected underground.  There is the Lioness, Lion, Big Cub, and Little Cub.   It actually went off twice while we were up at the Observation Point. 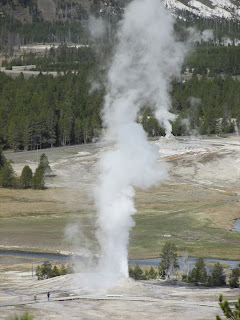 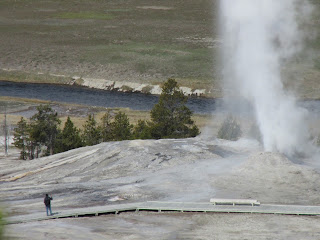 And then, after the traditional warm-up slashing and steaming, Old Faithful went off in all her glory shortly afterward the Lion Group.  I do say the vantage point was quite lovely to watch from as well.  For a sense of scale note how small the people sitting behind Old Faithful are.  Even from this distance we could still hear the splashing as the water poured back down to earth from its apex in the sky. 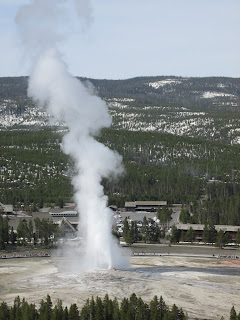 Back down the mountainside a bit to the fork in the trail that leads to Solitary Geyser which we had also never seen before.  Solitary geyser erupts one to four feet high about every five or seven minutes.  However, it didn't always do that.  It only started regularly erupting when in the early days of the park a pipe was placed in the geyser to bring hot water down for a swimming pool at the lodge in the basin below.  The water level dropped in the geyser and Solitary started erupting.  The pipe has since been removed and the water level has restored in the 1940's, but it still erupts.  This is one of those perfect examples of how we really have no idea what the long-term consequences of our human meddling will be.   We should remember that.

Solitary gave a nice three or four foot surge right as we came into view of it.  Since the eruptions are so close together we thought we stay a while and watch a few.  It turned out very interesting as well because no two eruptions were at all alike.

While were waiting out the five minutes between eruptions I took the chance to chat up on of the Frenchmen that has followed the trail from the observation point to Solitary along with us.  He taught me that we use the same word for geyser in both languages.  Only in French is sounds pretty much like the English word "geezer," as in old person.   He had also been to more US national parks than I had--which I think is saying something about how awesome these treasures are.  I hope someday to say I've seen Bryce Canyon, Yosemite, Mesa Verde, and the Grand Canyon, too. 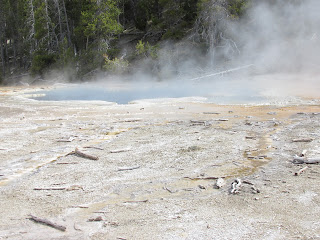 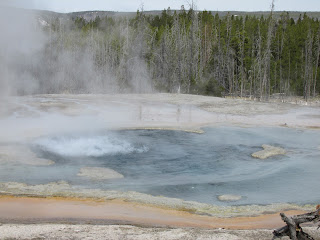 The trail loops back down then and drops you once more back to the boardwalks and Geyser Hill. 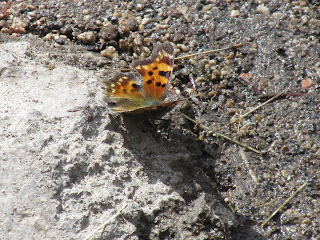 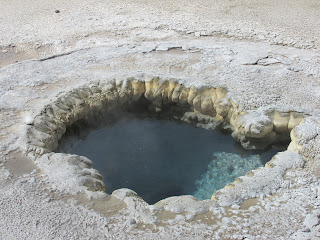 As we were moving along the boardwalks back to the car and to our next adventure we happened to catch a third eruption of the Lion Group--this time from a level vantage point and much closer.  As we watched it a  woman who we met last year in the geyser basin stopped and talked with us a while--unsurprisingly about geysers.  This woman is geyser crazy.  She has seen some pretty rare eruptions though because of her dedicated passion to this feature. 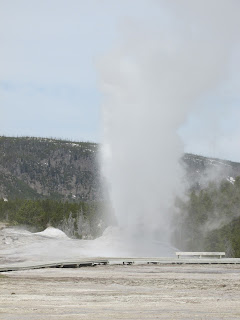 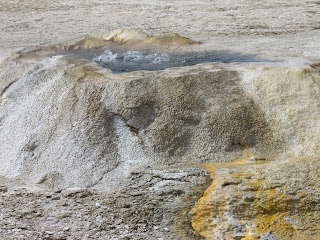 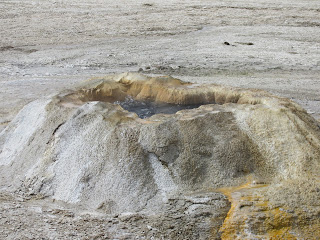 This was a pretty short and simple hike, not very far off the beaten path.  It didn't take much of the morning, but was a very worthwhile venture.  I think it would be a great and more private viewing option if one isn't up for the throngs of people at Old Faithful itself. 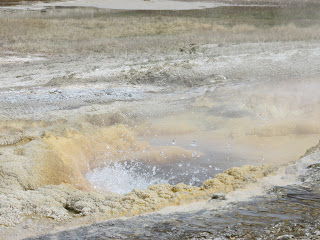 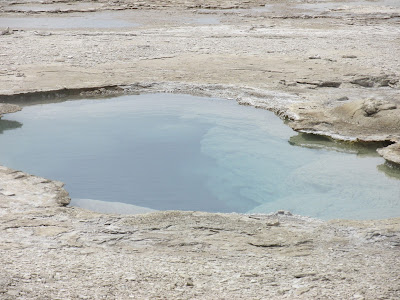 And then I saw some fool try to pet a golden-mantled ground squirrel as it it were a cat.  Oh, silly people. 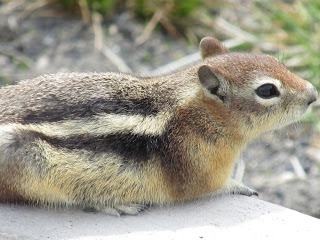 But, still, good hike.
By BLD in MT