Primus in 3D Weirdest Concert I Ever Saw

I went to probably the weirdest concert of my life last week.  Very, very weird, but in a good way.  Like carnival meets concert meets 3D movie. 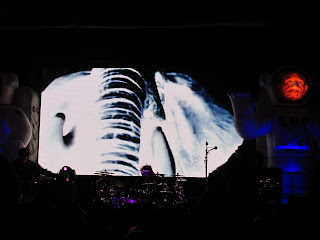 Primus is a three man band lead by an epic bass player, Les Claypool.  Since the bass is the lead they have a rather pounding, driving bass emphasis musically.  Lyrically they vacillate from very deep and philosophical to silly and playful--often both.  One of my favorite lyrics being "There's got to be more on TV than just moron TV," is one of the kind of both lyrics.

I do not know very much Primus music at all.  I listened so some of their newest album, Green Naugahyde,  with Matt when it first came out, but all and all its always seemed a bit to...heavy...for me.  Fine, but not exactly my cup of tea.  But when they announced a show in Billings--a show with 3D effects--I didn't really hesitate to support the music scene with my ticket purchase.   And really, a 3D show?!  What was THAT going to be all about?! 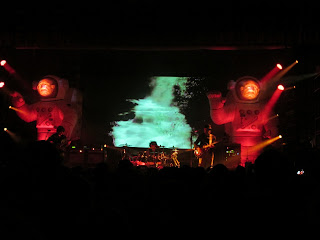 When we were in the venue and waiting for the show to start I told Matt I wasn't sure I was "tough enough" for this crowd of pierced up, dyed haired, tattooed, dressed in black folks.  They look a bit intimidating to me in their intensity and lack of color.  I think I saw only four tie-dyes in the whole crowd around me while I danced....it was pretty dark colored instead.  That is not my usual scene.  It was odd--they danced by just jumping straight up and down in one spot to the bass rhythm which was quite strange for a noodly, spinner, free flow type dancer like myself.

It was, apparently, a show that attracted all kinds.  I think that is a good thing.    And a sign of good music.  I hardly saw anyone I knew inside the venue though I did see a good number of my friends on the way out.  A very diverse crowd though I will say.  Not as many older folks as at a Dead show though. 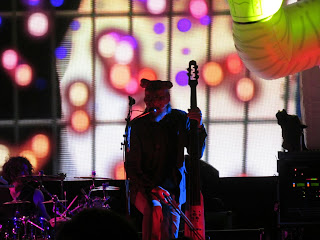 I wasn't completely sold on the show for the first part of set one.  Just as before I thought it was fine, but not my cup of tea.  I think I was still getting used to the crowd and the 3D and the basically unfamiliar music.  I realized that it had been a while since I went to a show where I didn't really know much about the band or their music.

But by the second set I felt compelled to let loose a holler in my excitement and pleasure.  I think musicians that makes me feel like giving a yell are successfully reaching my joy center.  Lots of music is good.  Not just anything can me me hoot and holler.

To add to the weirdest-concert-ever category I should mention that at set break they played black and white Popeye cartoons! 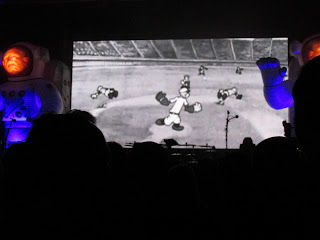 The 3D effects were pretty gosh darn impressive, I thought, but I have only been to one 3D movie in my life. So, its possibly I was easily impressed.  They really jumped off the screen and right onto my eye.  It seemed like you could almost reach up and touch some floating orbs, steamers, and glittering eyeballs that came out of the screen and over the heads of the audience.  It was pretty cool.

It also was pretty amusing to see the whole crowd dancing with 3D glasses on.

The 3D effects seemed to all be themed to the song--elephants during Southbound Pachyderm, waterfalls during Over the Falls and so on.  Over the Falls was probably my favorite of the night--at least of the songs I  was able to describe well enough to Matt so he could teach me the titles to.  I included their video for it below.  Its a song about people trying to go over Niagara Falls.
Les Claypool was a hilarious character who said it was his job to entertain each and every one of us 100%.  I think they were rather successful in that regard.  100% is pretty high to shoot for.

He told a funny story about eating out a a hamburger joint before the show and then going into a pawn show where the people working knew he'd just eaten burgers because there were already photos of him going up online.  He said that Billings must be pretty hard up for music if people are taking pictures of him while he's eating a burger.  He has a strange, clipped little accent that makes all his stories both hard to follow and all that much more amusing if you do manage to follow it. 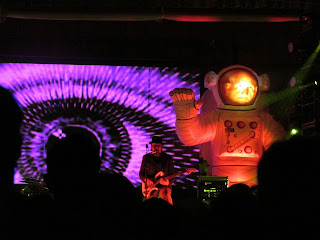 As a total show bonus I found a crumpled twenty dollar bill on the floor with all the bits of trash and riff-raff. I've found enough on the floor at concerts that I now will make an occasional scan at set break and shows end just to see if there might be anything laying around.

Made my ticket for such a weird and wonderful show a real bargain.  I hope they come back again sometime.
By BLD in MT