Last year was our first ever encounter with the absolutely magnificent Harlequin Duck.   These beauties are lovers of fast moving water.  Like shockingly fast water (see the video below).  I don't know how they don't get swept away as they calmly stand or swim in the midst of rushing white water.  They breed in these fast moving streams and then winter along the rocky northern coasts.   So if I have any hopes of seeing them it is while they are breeding.

When I first laid eyes on them it took my breath away.  Their pattern of feathers is delightfully improbably and gorgeous.  The male's chestnut-red side feathers are glorious in the sunlight and that head is just downright spectacular.  I mean, it has a prefect circle on it made of feathers!  Even the female in her more subdued camouflaging of feathers is quite a remarkable creature to behold and moves through the rough water with remarkable ease. 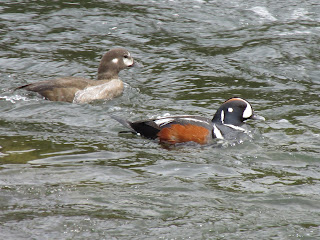 The first weekend of May we happened to pass by the LeHardy's Rapids which is where we had seen them almost exactly a year previous.  There was much more snow than last year, but we thought we'd walk down to the rapids anyway and check it out.  Maybe they'd be there again.  The trail down to the rapids had a good three or four feet of snow piled up on it, but it was more that worth it.

Because once again there they were!!
But this time there were more than a dozen of them perched on the rocks in mid-stream or swim-walking up the rushing current.   The males bobbing their beautiful heads at each other.   The females standing by looking unimpressed by all the bobbing. 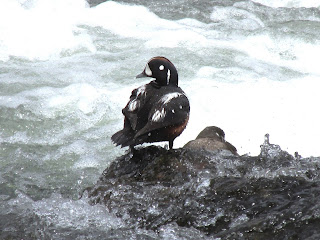 It was amazing.  They are so gorgeous that I just can't get over it.  I find them to be by far the prettiest duck I've ever seen.  Seeing so many of them all in one place was all the more wonderful. 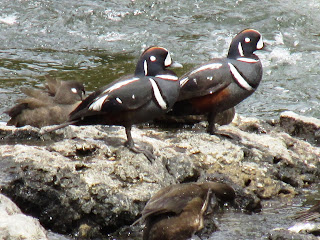 As we were once again in the area the following week we again stopped by the rapids.  However, in just the span of one week the three feet of snow on the trail was gone and the Harlequin Ducks numbered only two.

Its interesting how much chance and timing is involved in witnessing some of these wonders of nature.  I think Matt and I have found a new May tradition.
By BLD in MT