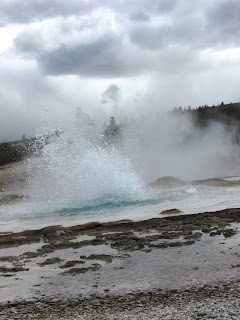 During our inaugural visit to Yellowstone this year we thought we'd take advantage of the lack of crowds and do some hiking in the Upper Geyser Basin near Old Faithful.  The boardwalks get a bit crowded for my liking later on in the season, but that first weekend of May there was only one other car in the parking lot when we arrived in the basin--and those folks were going to get coffee, NOT go out to hike the geysers.
Its wonderful to feel you've got this magical place sort of all to yourself.  I suppose its because I am from Montana, but, you see, I am not used to traffic and crowds, really.  One of our greatest blessings here is the lack of people.  So, the crowds that come to the park later can annoy me and diminish my good time.
Too many people disregard signs that tell them to stay off the delicate (and dangerous) thermal features.  Too many people (with telephoto lenses) walk bafflingly close to bison, elk, and the like.  Too many people are careless with their trash and food scraps.  It causes me some dismay.  Too many people, too many people. 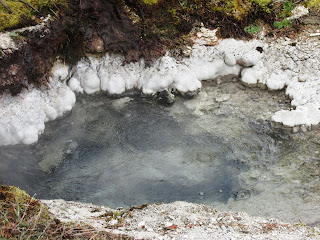 All that adds up to mean that this is the time for hitting the more distant, longer, or more strenuous trails in Yellowstone where there are hardly no people.  I read once that 98% of folks who visit the park never leave their cars or the boardwalks around the "major attractions."   Its not hard to get away from them as a result...you just have to walk a bit.  Something I am keen to do. 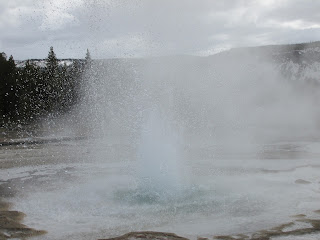 So we decided to use that first nearly-off-season visit (we were tenting in a campground that had only opened for the season that very day) to see how many geysers we could watch erupt in a single day on the soon-to-be-crowded boardwalks and trails of the Upper Basin.
The answer, as it turns out, is a bit tricky as I am not sure what precisely counts as an eruption.  See, I wasn't sure if the fountain-type geysers that are almost always erupting really counted as an eruption or not.  I think it does, but I am not sure.  I asked around and got rather mixed or uncertain responses.  So, seven major eruptions--Old Faithful (twice), Daisy, Castle, Riverside, Sawmill, and Grotto--and and uncounted minor ones is where the tally landed. 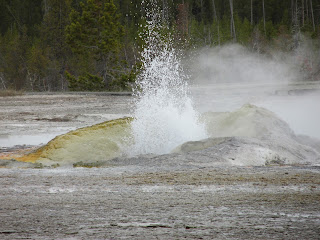 Of course, in addition to geysers there are also hot springs, pools, and fumeroles in the Upper Basin, too. 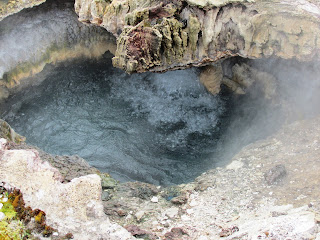 In fact, one square mile of the Upper Geyser Basin contains more than 150 geothermal features--including the five geysers that are easily predicted.  How crazy is that!?  150.  In one single square mile.  What a world.
We hiked a little more than nine miles around the basin as we timed out the different eruption predictions. 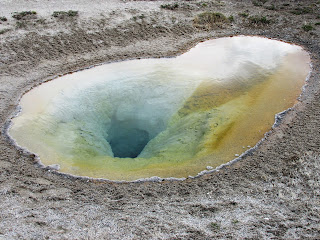 And they are predictions, too.  Riverside Geyser was an hour and half "late" in going off, but if it weren't for that who knows if we'd have seen Grotto go off.  And we wouldn't have met the nice kids on the journey to visit all the 50 states.
Geysers are amazing and Yellowstone National Park is home to 60-70% of all the geysers in the world.  Every time I watch an eruption it feels like a gift.  Its all so strange and otherworldly.  There is always an element of surprise and anticipation.  Some go off almost like clockwork and others really are a rare gift to those just happening to be in the right place at the right time.  Its a pretty magical basin, I must say.  Like another planet.  I can only imagine what it would have been like for early peoples who stumbled upon this land of steam and water spouts.    The mystery and power of the place is astonishing. 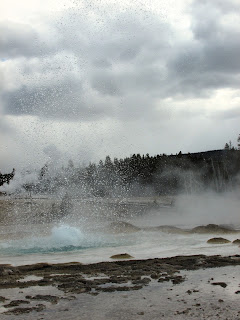