Sweet, Pineapple Refreshment in a Glass

A while back I picked up this free little cookbook someplace called The West Indies Cookbook.  It wasn't bad, but not one I decided to keep and I have since donated it to the library.  However, there were a couple good sauce recipes to copy down as well as a recipe for an amazingly refreshing and sweet beverage called a Pineapple Cooler.   As it happened around the same time I got the book Matt had picked up a couple pineapples on the cheap at the discount grocer so that we could continue to cut and sprout the tops in part of our scheme for staggered homegrown pineapples.  So on a warm spring day I had the chance to try out the pineapple cooler recipe.

The recipe called for use of the thick pineapple skins which we usually just toss in the compost bucket so I was intrigued as I love taking things that weren't being used and making them useful!  Like putting orange rinds in vinegar to make orange oil-vinegar cleanser and so on.  But, the skin of the discount grocer pineapples looked a bit whack upon close inspection and Matt and I decided we didn't really want to make a drink primarily composed by soaking them in water.

But, all was not lost.  The core of the pineapple (which we also hadn't been using in the past because I find it too hard to eat) looked perfectly good and so we just swapped out core for skin in the recipe. 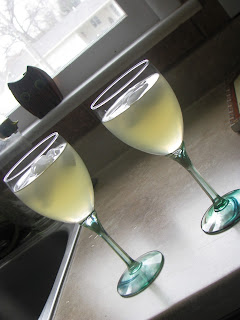 Cut the core into 1-inch cubes.
Place in a glass baking or casserole dish.
Add just enough hot water to cover the piece of core.
Stir in sugar and lemon juice.
Allow to cool before covering and putting in the fridge.
Allow to steep in fridge for 2-3 days before serving.
Strain and discard the core.
Serve over ice, diluting with cold water if you find it too sweet (as Matt did, but I didn't)

Even better than this recipe is the fact that I learned I could make use of the entire pineapple, you know, if I didn't buy banged up and aging ones at the discount grocer, that is.  Even just using the core makes the fruit far more economical to buy though.  In addition to using the core in this drink it can also be frozen to add to other drinks, like orange juice or fruit punch acting both as an ice cube and imparting wonderful pineapple flavor to whatever it soaks in.

And here is where I tell you that Matt, despite his interest in growing them, does not like to eat pineapple.  But, he did enjoy drinking them.  Me, I love pineapple any way you give it to me so this cooler recipe is definitely a keeper in my book.
By BLD in MT