Riverside Geyser is a pretty special geyser in that it is right on the bank of the Firehole River.  Hence the name.  It also is of note because it doesn't shoot directly up, but instead at an angle which arches over the river.  On sunny days in makes a lovely rainbow, as if the spectacle of the geyser itself were not enough. 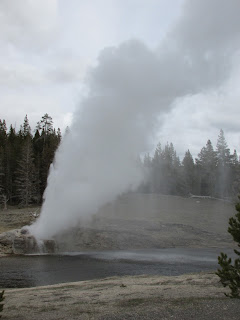 Riverside is one of the most reliably predictable geysers because it doesn't have any close geothermal neighbors to disrupt the underground plumbing.  But, as I mentioned earlier, the day of our geyser watching adventure riverside was quite "late" as to what had been predicted.  We kept joking that it was probably like the old saying that a watched pot never boils.  In the end, it was more than worth the wait...even though I got a sunburn while waiting.  (I was bundled up in stocking cap and scarf and never gave a second thought to a sunhat because it was so chilly and overcast!  Lesson learned.) 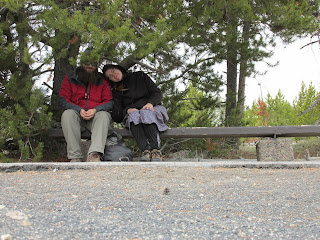 For and hour or two before the eruption the geyser bubbles and overflows into the river below building the anticipation of the full event. 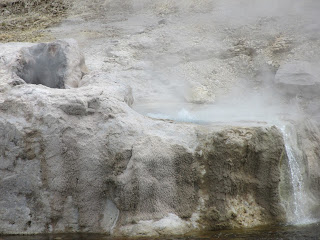 Then enough pressure is built up underground and Riverside Geyser blasts 75 feet of water in its arch over the river.  When it goes off it goes with glory and power for a full twenty minutes or more including the great steam columns that follow the peak of the eruption.  This cycle repeats itself every five to seven hours. 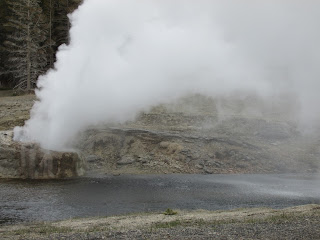 We share the experience with the two kids on the 50 state road trip and the Frenchman who taught us how to say "beaver" in French.  We were all giddy.  We'd been waiting with such expectation and anticipation that when the moment came you'd have thought it was Christmas.  It made us run and smile and laugh.  It was the first time any of us had seen Riverside's wonder. 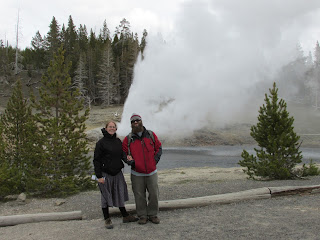 I still have to come back and watch again some sunny day.  I think I'd like to see that rainbow.
By BLD in MT